Corbyn has hit back at Cameron's cowardly attack, and it's a corker (VIDEO) - Canary 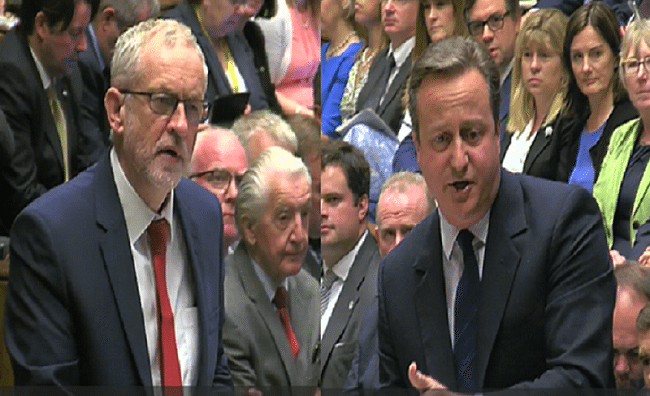 At the end of PMQ’s on 29 June, David Cameron made his position on Jeremy Corbyn’s future as the leader of the Labour party very clear. He, like many Labour MPs at the moment, believes Corbyn should resign.

Cameron’s “For heaven’s sake, man. Go!” comment was artfully placed at a moment where Corbyn could not retort. However, according to Sky News’ Jon Craig, Corbyn has now done so. And it’s one many in the nation will be pleased to hear:

Spoke to a defiant Jeremy Corbyn. Says he will "definitely" be on ballot paper & described David Cameron's end-of-PMQs attack as "Flashman!"

Corbyn’s labelling of Cameron as “Flashman” is a reference to a character from the book of the same name by George MacDonald Fraser. Or, more precisely, it’s a reference to a “base coward” from that book. That does seem to accurately sum up Cameron’s behaviour today: waiting to hurl his abuse until a time when a comeback was impossible.

A continual raft of Labour politicians are lining up to urge Corbyn to resign – Ed Miliband and Gordon Brown being two of the latest. This comes after the Parliamentary Labour Party started a coup to topple its leader following the EU referendum. But the news that Corbyn is “defiant” in his determination to be a part of any new leadership contest, despite the political and media opposition he’s facing, will relieve many of his supporters.

It will also please those who have joined the Labour party since the coup began, many for the explicit purpose of keeping Corbyn in position:

I am told 13,000 people joined Labour last week, with 60% giving the reason they are "supporting Corbyn"…. https://t.co/TGNzled4cA

As a man who has often found himself on the wrong side of the establishment but fought on regardless, it’s not surprising to see Corbyn taking this position. As he said following the vote of no confidence in his leadership by Labour MPs:

I was democratically elected leader of our party for a new kind of politics by 60% of Labour members and supporters, and I will not betray them by resigning.

It seems that Corbyn is hell-bent on ensuring it is Labour party members that decide whether he should be the leader, and will continue weathering the vicious political storm until that happens. It’s a courageous choice. That’s a lot more than we can say for the outgoing Prime Minister’s behaviour at PMQ’s.

Sign this petition if you support Jeremy Corbyn, and haven’t done so already.