Here's what the Labour coup has to offer, and it would plunge the party into electoral oblivion - Canary 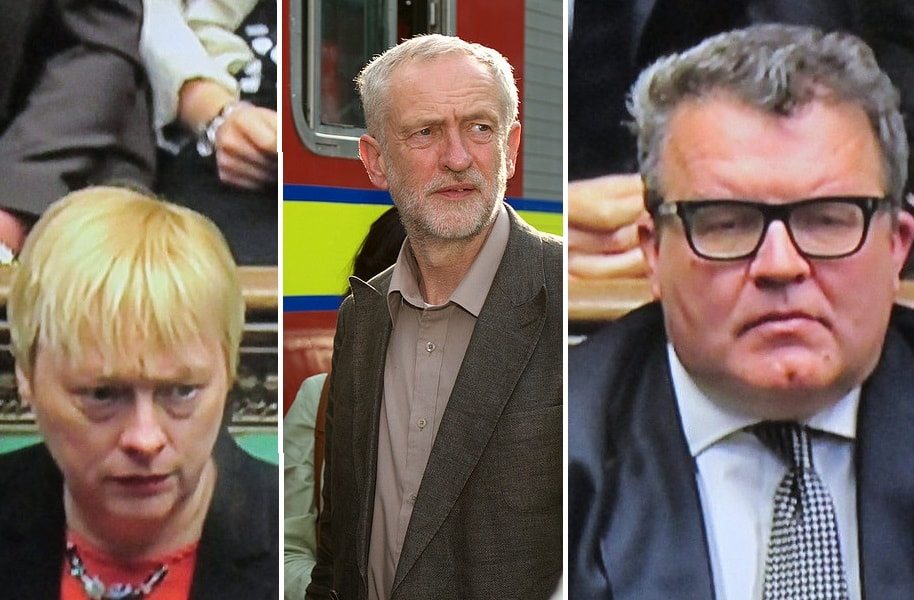 The media is touting the potential candidates to challenge Jeremy Corbyn in a leadership contest, and it’s not looking good for the coup crew. According to various outlets, the two most likely candidates are war cheerleaders Angela Eagle and Tom Watson, who are about as inspiring as a dry lunch.

If Labour carried on with a leader like these two it would be consigned to electoral oblivion. Just think about their campaign slogans:

Both Watson and Eagle voted for the Iraq war, to bomb Syria last December, to renew Trident and to protect Tony Blair from being tried for war crimes. It appears the coup crew have thought this through as well as their latest military misadventure. Like with the bombing campaign in Syria, they have no clear endgame.

All of the MPs who have resigned to topple Corbyn abstained on the 2015 welfare bill, which allowed the Tories to make a further £12bn of ideological cuts to public services.

Labour tried anti-immigration mugs and austerity-lite last election and that went down about as well as a fart in an elevator, as Labour voters moved to the Green party, the SNP or away from party politics altogether. Pandering to anti-immigrant sentiment rather than challenging the real issue of austerity only vindicates UKIP and Tory rhetoric. Whereas, Corbyn supporters rightly point out that he challenges both parties by explaining that crumbling public institutions are the fault of spending cuts, not foreigners. He said:

For many, Jeremy Corbyn is the antidote to the poisonous polished political establishment. A man in politics, not a politician. The antithesis to the cosy Westminster bubble – where there is fiery debate within the limited confines of neoliberalism. Where the question is how much spending to cut, not how much to invest. The majority of the parliamentary Labour coup crew, the Conservative party, the Liberal Democrats and UKIP are happy to prop up this economic orthodoxy that led to the 2008 financial crash, a massive fall in living standards and further polarised income inequality. UKIP paint themselves as outsiders, but they just harness anti-establishment sentiment to ease their way further into the bubble. The difference is, Corbyn wants to pop it.

And that’s the very reason for the coup. Whose side are the plotters on? The rebellion is backed by David Cameron – the leader of the Conservative party.

There is a wave of anti-establishment sentiment manifesting itself in Brexit, UKIP, the Green party, the SNP and Corbyn’s huge support base. Neither Watson nor Eagle can ride it because they are seen as more of the same – politicians maintaining the military-industrial complex and neoliberal economic orthodoxy. Guardians of the status-quo.

Being a real opposition is the path to victory, not being so indistinguishable from the Tories that people accidentally vote Labour in the next general election.

And before the real challenge of elections, the coup crew are struggling to even select a candidate. Yvette Cooper is another potential, while former Work and Pensions Secretary Owen Smith expressed his leadership ambitions when he was still in the job. And, according to Politics Home, support for Eagle is dwindling already. A senior Labour source said:

Chris Leslie is the one everybody is moaning about. He’s going round like he’s the Chief Whip putting not very subtle pressure on colleagues to back Angela, and it’s putting people off her a bit. There’s certainly a bit of push-back against her

If the coup crew doesn’t want to split the establishment vote, it must choose a single candidate to challenge Corbyn.

Renowned political commentators Thomas G. Clark of Another Angry Voice and editor-in-chief of The Canary, Kerry-anne Mendoza, both have a cunning solution to Corbyn’s problems, that could see this coup spectacularly backfire. Mendoza writes:

A canny move by Corbyn would be to make this an all-or-nothing battle – if he wins, each of those MPs who voted against him should be deselected. If Corbyn stands a chance in the next election, he needs a party behind him with support, not knives. Clement Attlee could never have built the NHS, the first social housing programmes, and our state education system, and nationalised swathes of industry if the benches behind him, and even the chairs in his own cabinet, were filled with people ideologically opposed to that mission.

Corbyn could play this coup to his advantage and bring the Labour party back to its working class roots. Stand on a platform of deselection and the Labour party will be unified no matter the outcome of the leadership election – either as an establishment party, or a people’s party under Corbyn.

This unwelcome and unrequested intervention by the Labour mutineers presents the party membership with a chance to restock those benches with MPs that look, sound and think like the voters they will need next time round. Butchers, bakers, entrepreneurs, teachers, social workers, public defenders, journalists, carers, the staff of the NHS, office workers, call centre workers, bus and train drivers – an influx of new and fresh voices, a break from career MPs. Imagine that at the next election? The stale, dry offering of the Conservative party, versus a movement of, and by, the true face of Britain.

The 172 MPs who signed the vote of no confidence in Corbyn have expressed that they cannot work under him. And if the membership votes for a reformed Labour party under Corbyn, then that’s the democratic outcome.

Furthermore, the carefully co-ordinated coup puts its own political agenda above the interests of the Labour party. The establishment media and MPs claim Corbyn cannot be elected. But in reality, Corbyn’s tenure so far has been a success:

If the Labour party approached a general election under Eagle, Watson or another establishment candidate, it would fall flat on its face. Without genuine progressive policies and the ground troops galvanised by a candidate like Corbyn, Labour would be consigned to electoral oblivion.