This isn't Labour vs Corbyn, it's the Establishment vs Democracy - and it's time to pick a side - Canary 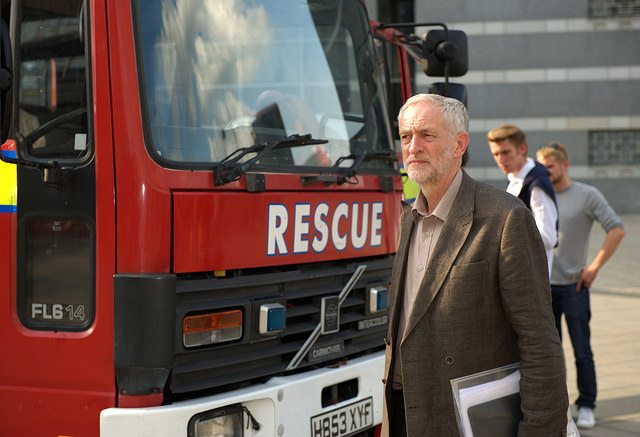 I’m considering joining the Labour party. This may not seem a big deal to many people, but for someone who has been dismissive and disengaged from parliamentary politics for more years than I care to remember, to me it’s massive.

I’m not a Corbynista. I watched in a somewhat bemused fashion as he swept into the leadership role, with an outpouring of support which hasn’t been seen for a mainstream politician for generations.

It wasn’t as though I didn’t like Corbyn. I liked him before his name went forward for the nomination, and I liked him afterwards. But as someone who’s spent most of her teenage and adult life engaged in political activism, I just couldn’t see any point in investing time and energy into the Westminster elite, and a game of politics which ultimately, through the first past the post system, can never represent the views of the electorate.

But it was refreshing to see someone espousing proper left wing politics, and expressing sentiments that the years of Blairite centerism had swept away; someone who wouldn’t support the government in sweeping through their austerity measures, who would oppose trident, and would vote against launching the UK into yet another war.

I loved watching the first parliament sitting after he was elected, seeing him and John McDonnell sitting on the front bench, something I never thought I’d see. I have a soft spot for Mcdonnell after he, many years ago, wrote me a letter thanking me for “dropping off” our leaflets after we’d disrupted parliament with leaflets about the number of children killed by sanctions against Iraq.

However, I was still not ready to get passionately behind the Labour party. If anything, I felt the opposite. After the Tories unexpected election victory, it seemed to be the time to be getting behind grassroots initiatives and community organising. I thought we needed to be building alternatives to the current system, at the same time as vocally and militantly opposing the cuts the Tories were implementing.

And for me, Corbyn’s victory sucked the life out of this organising. I felt like it legitimised parliamentary politics, and pulled people’s energy into supporting and building the Labour party, rather than focussing on building practical alternative projects.

Firstly, and most importantly, Brexit.

The sudden victory of the Leave vote and the economic and social turbulence it’s caused has shown a real need for a strong voice in opposition. Turbulence is a nice word. The reality is this vote has given legitimacy to the most disgusting racism. Reported hate crimes are up 57%, but these are only the reported ones – and the real figure will be much higher. My social media timelines have been filled with heartbreaking stories from one friend after another who have experienced or witnessed appalling racism.

Yes, the rise of the far right in this country has been happening for a while. But the language surrounding the referendum debate, and the result, has given racists a voice which they aren’t afraid to use. And the scale upon which it is happening is unprecedented and frightening.

Now, more than ever, we need strong voices in all arenas of politics to oppose the far right rather than pander to them. Corbyn, as someone who is strongly anti-fascist and pro-immigration, is a much-needed voice in this debate.

Furthermore, if the Leave vote is to be read as an anti-establishment vote, that people are fed up with the status quo, that they are fed up with cuts, with having to wait for a hospital appointment, then the last thing they need is an  “austerity light” centre-left party. Instead, there is a real need to refocus the debate and make it about the crushing austerity measures the Tories have imposed upon us. We need to ensure that a series of practices which have been condemned by the UN as human rights abuses are blamed for what is happening in this country – not immigrants, or refugees.

Given the Brexit vote, there is also a real need to have a clear alternative voice. A voice which stands up for worker’s rights, human rights, environmental protections, the funding for our poorest regions, and all the other safeguards which Europe provided us with. A centre-left/Blairite party will only enable the Tories to decimate the rights we have left.

Meanwhile, there is something even deeper going on – a massive establishment coup against a democratically elected leader who still has massive support from the party membership. As revealed through investigations by The Canary, it has been an orchestrated coup, spearheaded by Portland Communication,  a PR company which boasts Alistair Campbell as a senior adviser, and the Fabian Society who have many links to big business.

This is not a string of random acts. This is a coordinated attack on Corbyn’s leadership (because let’s be frank, that’s what it is), and it is coming from one source. The Fabian Society. A society who are funded by the likes of HSBC, Cuadrilla (who, oddly, Portland do PR work for) Barclays and Lloyds.

Meanwhile, those involved in the coup have been desperate to smear Corbyn and McDonnell, and to write off over 233,000 people who have signed a petition in support of Corbyn and the 10,o00 who mobilised on the streets of London earlier this week.

The establishment is feeling scared, under attack and desperate to win back control of what has become for them, a very profitable business. And we have a real opportunity to oppose them.

Of course, there are criticisms. Of course, there are things he’s done wrong, of missed opportunities. He’s not a highly polished frontbench politician with years of training for the role. He seems to be a decent man, thrust into an indecent role, doing the best job he can with commitment and passion.

Furthermore, Corbyn has been continually bashed by an establishment led media, who have been determined not to give him a fair hearing. It has attempted to portray him as an outsider with no chance, even when he has been ahead in the polls.

Then there is the argument that supporting Corbyn may lead to splitting the Labour party. But it’s not Corbyn who’s done this, it is the Blairites with their coup. At a time when the country should be focusing on the mess that the Tories have landed us in with the referendum, and their own splits, the focus has been put on the Labour Party. It is the Blairites who should be putting up and shutting up, and respecting the massive mandate Corbyn was given less than one year ago. Corbyn has, quite rightly, refused to step down, when he still has such broad support of the membership.

I don’t want to legitimise the political elites by joining the Labour party. Nor do I want to legitimise the power of Westminster politics over grassroots community organising. But these don’t need to be mutually exclusive. Supporting one does not mean that I’m giving up on, or rejecting the other. And given the options which are on the table at the moment, Corbyn might just be our best chance of resurrecting something positive from the mess we seem to be in, and in preventing an even further drift to the right.

These are exceptional and turbulent times, and this leads to difficult and complex decisions. Change does not come through putting a cross in a box every few years or supporting one person – however committed and passionate they may be. Real change will only come through people being politically engaged on a daily basis and building alternatives.

However, given the situation we’re in, supporting Corbyn, keeping out the profit-making establishment Blairites, and building a credible opposition to Tory policies which at the bottom line are killing people, seems like the best option we have.

I haven’t bitten the bullet and joined Labour yet, but I think it might be time.