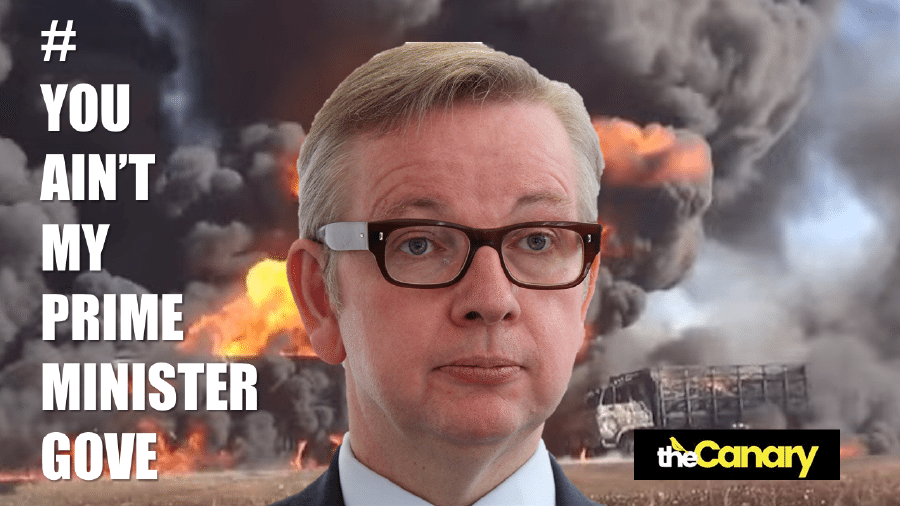 In a moment of House of Cards style Westminster drama, Michael Gove has usurped Boris Johnson and is now running (contested only by Theresa May) to be the next Conservative leader and Prime Minister. Britain has responded with the hashtag #YouAintNoPrimeMinisterGove – and it’s brilliant.

Satirizing the popular #YouAintNoMuslimBruv hashtag set up by British Muslims in the wake of the Leytonstone attack, Brits are queuing up to list the reasons that Gove is not Prime Ministerial material in their eyes.

The most common reaction was to reiterate the words of Gove himself, who has been telling Britain for years that he is not fit to lead the country.

Aside from those many, many videos now doing the rounds – they weren’t short of other reasons either.

Gove: the man who spent hundreds of thousands to equip schools with Bibles for which he had written a foreword. #YouAintNoPrimeMinisterGove

#YouAintNoPrimeMinisterGove You're a perilous goblin who rhymes with Drove (Out the Teachers) https://t.co/fn6GYpOvxh

Some even started to write him songs…

Gove. Walk out the door.
Turn around now.
You're not welcome anymore.#YouAintNoPrimeMinisterGove#CurseTheTories

This move has the added cheer for non-Conservatives of presenting the Conservatives with two entirely unelectable faces at the next general election. Michael Gove, whose decimation of the education system gives him a level of public popularity somewhere between Thatcher and Enoch Powell; or Theresa May, whose increasingly belligerent and authoritarian handling of the Home Office makes her probably marginally less popular again.

Cameron is out, Osborne is silent, Boris Johnson is over, Michael Gove is in the ascendency – and Theresa May is apparently all the Remain side of the party have to contest him with. This was the outcome that The Canary suggested was possible all along. As we wrote weeks ago:

In the end, it happened. This is ever more incentive for Jeremy Corbyn to remain firm in position as Labour leader. A vigorous, left-wing movement that is unafraid to welcome alliances with the progressive forces in UK politics and campaigning (Greens, Plaid Cymru, the SNP, and grass roots networks across the country) – would likely trounce a divided Conservative party with an unpopular leader in the middle of an election fraud scandal. It’s time for the Labour plotters to resign, at the very least from their coup – and for Labour to take the fight to where it counts. The country is crying out for a progressive, anti-austerity government, and the only thing standing in the way are the Labour plotters.