As the Labour coup falls apart, the media scrapes the bottom of the barrel to smear Corbyn - Canary

As the Labour coup looks set to fail, the media has betrayed its increasing desperation by trying to smear Jeremy Corbyn as antisemitic, yet again.

Our Jewish friends are no more responsible for the actions of Israel or the Netanyahu government than our Muslim friends are for those of various self-styled Islamic states or organisations.

But here are the cross-media headlines: 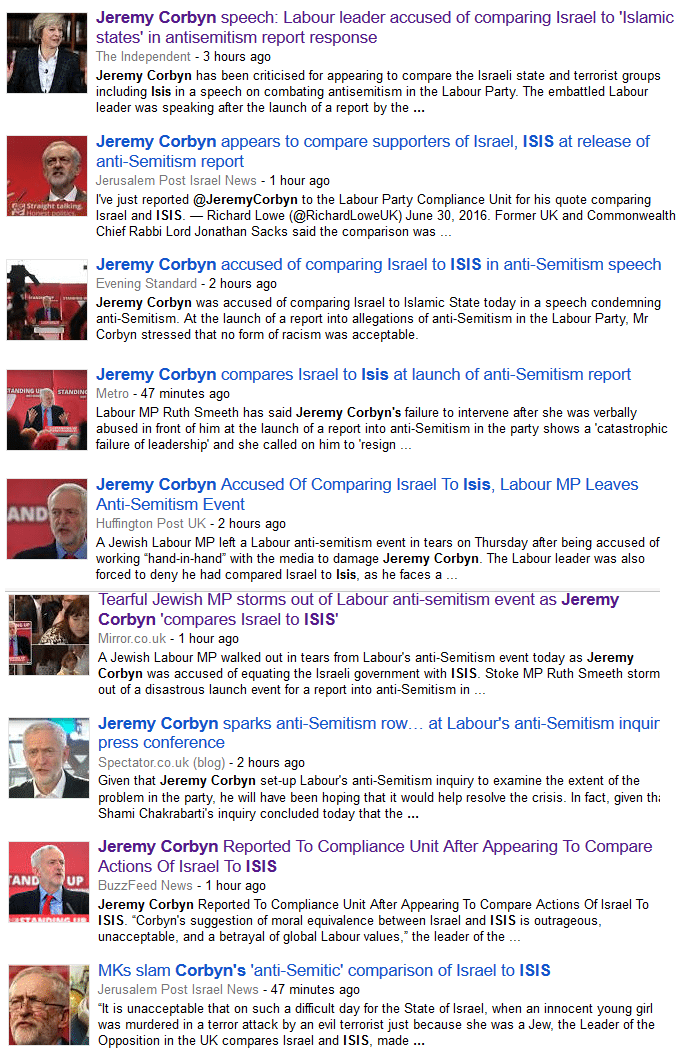 Of course, the media will make sure to add something like ‘appears to’ when it peddles inaccuracies. There’s no mindful analysis. When bashing Corbyn is concerned, the truth takes the backseat.

Corbyn is not comparing the State of Israel to Daesh (Isis/Isil), as the coup crew would have you believe:

But that is a deliberate misrepresentation by those desperate for ammunition against a Labour leader with a gold-standard record on anti-racism, one of the lowest expenses counts and a consistent record on LGBTQ rights since he was elected 33 years ago.

In reality, Corbyn is comparing antisemitism with Islamophobia. Just as Muslim people are not responsible for atrocities committed by those who share their religion, Jewish people are not either.

Unbelievable. @jeremycorbyn is drawing parallels between anti-semitism and Islamophobia not comparing Israel to Isis pic.twitter.com/TTqJcADx9I

Corbyn’s statement seeks to express solidarity with both Muslims and Jews in the battle against lazy generalisations.

What is important in the comparison is the fact that both Muslims and Jews experience these racist generalisations, and anyone making these generalisations should be condemned. Within Corbyn’s comment, what links extremist Islamic groups and the State of Israel is that Muslims are sometimes blamed wholesale for the former, while Jews are sometimes blamed as one for the latter. Therefore, Corbyn’s comment does not draw parallels between the atrocities committed by Daesh and those perpetrated by the State of Israel.

The State of Israel commits atrocities, but not all Jews are to blame. For those unfamiliar, here are some facts about the present state of the illegal occupation of Palestinian territory:

– They are also building illegal Jewish-only settlements in Palestinian territories.

– In 2014, over 2,300 Palestinians were killed by Israeli forces. 39 Israelis were killed during this period.

The shameless smear comes as Corbyn’s leadership looks increasingly sturdy, even in the face of a 172 MP strong no-confidence vote.

It appears the Labour coup has careered swiftly into a legal brick wall. After a mind-blowing display of support for Jeremy Corbyn, Labour party legal advice states the leader will automatically be on the ballot paper in the upcoming leadership election.

The support came from all angles – in the form of a 10,000 strong last minute demonstration, a petition that skyrocketed to over 230,000 signatures, and a surge in both Labour and Momentum membership. Momentum is the grassroots campaign backing Corbyn’s Labour.

Journalist Robert Peston has suggested that as many as 13,000 people have joined Labour since last week, with 60% citing ‘supporting Corbyn’ as their reason.

A vehemently anti-Corbyn Labour supporter has reported the leader to the party’s Compliance Unit for his comment, telling Buzzfeed News:

Until recently I wanted him gone just because I thought he was incompetent – now I think he’s also dangerous, and not just to the future of the Labour Party.

This is the unit that initiates Labour party rules in relation to the comment. But Richard Lowe may have shot himself in the foot by reporting Corbyn. Any reasonable analysis will only vindicate Corbyn’s remark. Exactly that happened with the Chakrabarti inquiry into antisemitism in the Labour party, following the last series of smears ahead of the local elections. Flying in the face of the entire establishment media coverage back in May, is the verdict:

The Labour Party is not overrun by anti-Semitism.

The coup crew is really grasping at straws. The looming leadership election looks set to hand Corbyn victory, as the attempted coup only increases his support base. This shameless smear against a man who has fought racism his entire life only betrays their desperation.