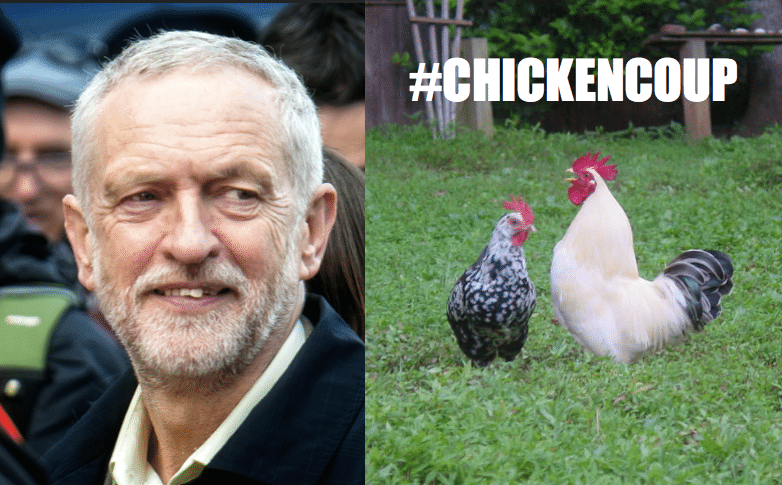 The Canary can reveal that two leading figures in the Labour coup to oust leader Jeremy Corbyn are facing motions of no confidence by their local Labour constituencies.

The first victim of what is now becoming known as the #ChickenCoup, is likely to be Labour MP John Spellar. It was Spellar who offered run as a stalking horse to enable the coup. He recently appeared on the BBC’s Daily Politics programme, and launched into a breathtaking rant about the party membership and voters – who are now all to the left of him. Dismissing the membership as “Trots” and “lunatics” – Spellar revealed the utter contempt with which the Blairite ring of the Parliamentary Labour Party holds their 380,000 members and millions of voters.

The Canary received this press release from Spellar’s ward this week:

Following the tabling of a Motion of No Confidence in the Labour Party Leader, officers of Abbey Ward in the Warley constituency launched a poll of its members.  Over 90% of the members have called on John Spellar (their Labour MP) not to support the Vote of No Confidence.

The members called on all Labour MPs, especially our own MP John Spellar, to join with the majority of party members and reject this attempt to remove Jeremy Corbyn. It is only by uniting behind the leadership of the party that we will ensure that the Labour Party proves to the electorate that we are capable of governing and providing a real alternative to the austerity measures of this Tory Government at the next general election.

But Spellar is not alone.

In Stoke-on-Trent Central, the Constituency Labour Party (CLP) met this week two vote on two motions. One in support of Jeremy Corbyn, and one vote of no confidence in local MP Tristram Hunt who has been a leading figure in what is widely being described as the #ChickenCoup. The results were reported publicly via Facebook, in a post which has since been removed: 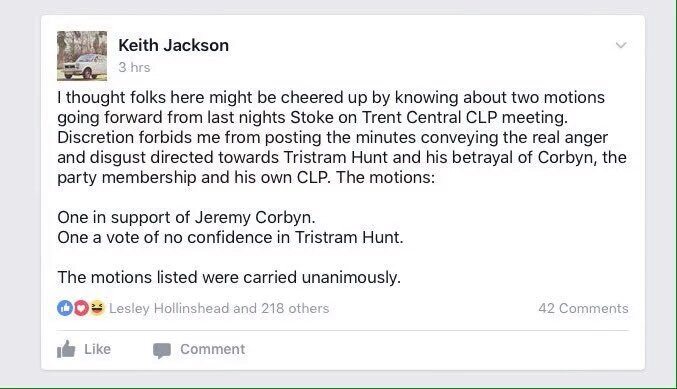 In Stoke-on-Trent South, a vote of no confidence is also being tabled against Labour MP Rob Flello who, after assuring the constituency that he would back Corbyn, joined the coup in parliament. Stoke-on-Trent South CLP chairman Chris Robinson told The Sentinel:

“I have to say I’m totally disappointed in Rob Flello. We had a CLP meeting on Friday and he assured us that he would not act against Mr Corbyn, and now he has totally gone against that.”

“I wouldn’t say our branch was unanimously behind Mr Corbyn but there is a big majority – about 90 per cent.”

Rumours were also circulating on Friday morning that Hilary Benn would be facing a motion of no confidence at the Annual General Meeting (AGM) of the Leeds Central CLP. The Canary contacted Leeds Central for comment and were told:

We have received no such motion from any of our affiliated bodies or branch parties as it stands.

Meanwhile, a petition called “A vote of confidence for Jeremy Corbyn after the Brexit vote” has gathered more than 230,000 signatures in the last week and continues to rise. A hastily convened confidence rally outside parliament this week saw more than 10,000 supporters pack out Parliament Square at a moment’s notice to back the Labour leader. The leaders of the 12 strongest unions in the United Kingdom also wrote a letter of support following the attempted coup.

Over 22,000 people are rallying at the hashtag #Corbyn4All to demonstrate the diversity of Corbyn supporters which the mainstream media and the neoliberal establishment of the party refuse to acknowledge.

I'm supporting @jeremycorbyn because I don't trust anyone else. #Corbyn4All pic.twitter.com/fpdzsNVaxZ

In the wake of this unprecedented support for a political leader whose Parliamentary Party has all but abandoned him, Labour wants to replace him with Angela Eagle or Owen Smith. Names which, to much of the country will be greeted with: who? The most gifted writers at The Thick of It could not have conjured a more ridiculous episode than the last week of the Parliamentary Labour Party. As this author put it in exasperation on Wednesday night:

In short, the left has found a progressive voice that is resonating with people outside the Westminster political and media bubble – and not a moment too soon. In reaction, those inside the bubble have decided to attempt an entirely undemocratic coup, and even threaten to leave the party to found a new one. We cannot be alone in thinking, simply: Good riddance.