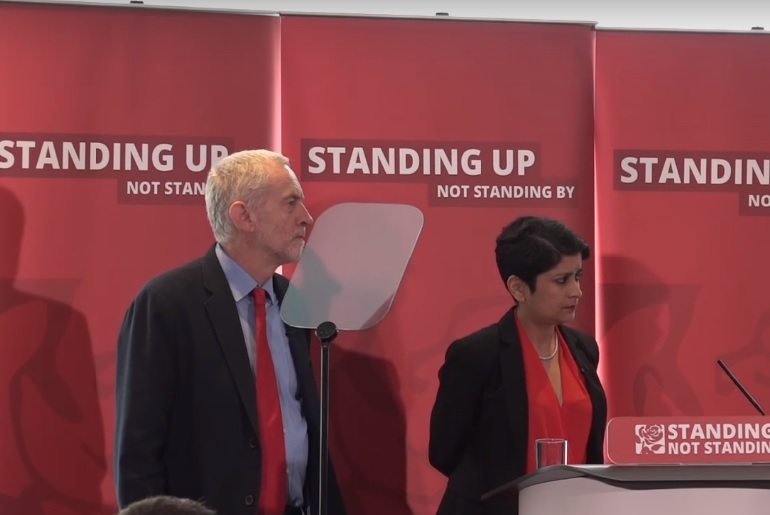 The release of Labour’s Shami Chakrabarti Inquiry on 30 June should have been an incredibly positive event for party leader Jeremy Corbyn. But it didn’t quite go as planned, as the mainstream media seemed to focus its efforts on kicking Corbyn while he was down rather than covering the outcome of the anti-racism report. Inquiry chair Shami Chakrabarti soon stepped up, however, slamming media outlets for consciously manipulating their coverage to reflect badly on the embattled Labour leader.

Lawyer and human rights campaigner Shami Chakrabarti spoke to LBC Radio on 30 June about how the media had been:

so quick today to trash our open-hearted work

In particular, she defended Jeremy Corbyn’s condemnation of stereotypes aimed at minority religious groups, which had been shamefully manipulated by a media establishment clearly out for blood. The Labour leader had made it very clear that both antisemitism and Islamophobia were equally unacceptable, insisting:

Our Jewish friends are no more responsible for the actions of Israel or the Netanyahu government than our Muslim friends are for those of various self-styled Islamic states or organisations.

As anti-Corbyn figures in politics and the media rushed to condemn this poignant comment as somehow antisemitic, which it clearly wasn’t, Chakrabarti said:

I am a little heart-sore with the misrepresentation of those remarks about Israel… I’m really, really disappointed with the people that have spun that.

Another issue ‘spun’ by the media was the walkout at the inquiry’s press conference of Ruth Smeeth, the Stoke-on-Trent North MP who previously worked as Director of Public Affairs and Campaigns at the Britain Israel Communications and Research Centre (BICOM) – a pro-Israel lobby group with historically close ties to Labour party right wingers.

Smeeth, who The Electronic Intifada has called an “Israel lobby spin doctor”, claimed she had left the press conference abruptly because an activist had “used traditional anti-Semitic slurs to attack me for being part of a ‘media conspiracy'”.

In reality, neither the Jewish faith nor talk of a conspiracy were mentioned. The activist in question – Momentum Black Connexions (MBC) media officer and the-latest.com editor Marc Wadsworth – actually said:

I saw that the Telegraph handed a copy of a press release to Ruth Smeeth MP, so you can see who’s working hand in hand.

The only obvious suggestion here was of alleged collusion between The Telegraph and Smeeth herself – who Wadsworth later claimed he didn’t even know was Jewish. But voices in the mainstream media desperate to smear Jeremy Corbyn and anyone vaguely supportive of him jumped all over Smeeth’s comments about possible antisemitism.

The-latest.com soon slammed the UK’s media establishment for the ensuing slander against Wadsworth, calling it “a Fleet Street concocted firestorm”.

Chakrabarti also steered away from labeling Wadsworth – an anti-racism activist and self-proclaimed “ally of the Jewish people” – an antisemite. She did claim, however, to have been “disappointed” by the comment directed at Smeeth, and insisted that it had done Labour and the cause of anti-racism “no favours”.

Jeremy Corbyn called for Chakrabarti to undertake her anti-racism investigation in late April 2016. This followed what Jewish author Norman Finkelstein called a “smear campaign” of “political blackmail”, which was led by right-wing media outlets and pro-Israel commentators in an attempt to undermine the Labour leader and his allies. The aim of the report was to show that Corbyn was serious about cracking down on all forms of racism present in his party.

Unfortunately, says Chakrabarti, the mainstream media’s misleading posts on 30 June “cast a shadow over two months’ really hard, open-hearted work”. While her report did find some “minority hateful or ignorant attitudes” and some “bitter incivility of discourse”, it also concluded that:

[the] Labour Party is not overrun by anti-Semitism, Islamophobia or other forms of racism

Labour members should be free and positively encouraged to criticize injustice and abuse wherever they find it, including in the Middle East… But surely it is better to use the modern universal language of human rights, be it of dispossession, discrimination, segregation, occupation or persecution

Chakrabarti finished her interview with LBC radio by praising Corbyn’s Labour party for giving her the independence to undertake such a valuable investigation, and made a very clear comparison with other parties, asking:

Where is the inquiry in either UKIP or the Conservative party into holocaust metaphors that have been used in the referendum campaign?

And indeed, mainstream media outlets could so easily focus on the endemic racism on the British right rather than jumping on a libelous bandwagon designed to undermine one of the biggest anti-racism campaigners ever to lead a UK party. But then, objectivity never was their strong point.