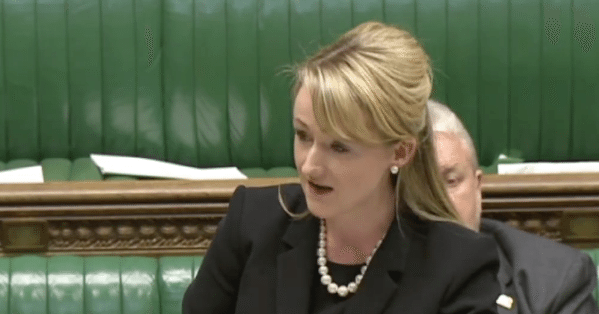 Labour’s new Shadow Chief Secretary to the Treasury, Rebecca Long-Bailey, has proved Jeremy Corbyn’s new shadow cabinet is a real opposition. Unlike Labour leadership hopeful Angela Eagle and the majority of the former shadow cabinet, who resigned in droves this week in a coordinated attack on Corbyn.

The coup crew are restricted from making the following kind of argument, because they presided over privatisation and Private Finance Initiatives (PFIs) under Tony Blair. And, like the Conservatives, they ideologically support the selling off of state assets.

Making short work of George Osborne in the House of Commons, the MP for Salford and Eccles turned one of the Chancellor’s favourite phrases against him.

He didn’t fix the roof when the sun was shining, quite the opposite, he sold it off.

The Tory government made a record £26bn through selling off our assets in 2015, according to the Press Association. The scale of Osborne’s privatisation in 2015 overshadows even Margaret Thatcher’s £20bn sell off in 1987.

But it’s not just Osborne and his ilk that value short term, one-off financial gains over more profitable long term investment that would leave the taxpayer much better off. Eagle and others in the coup crew presided over privatisation under the Blair and Brown governments.

As Richard Seymour writes in The Guardian:

But it is not just the Blairite’s record that means they haven’t got a leg to stand on when it comes to truly challenging the Conservatives. They are also ideologically alligned with Thatcherite economics. All of the MPs who have resigned to topple Corbyn abstained on the 2015 welfare bill, which allowed the Tories to make a further £12bn of ideological cuts to public services.

We must also remember that Eagle, Tom Watson, Chris Bryant and the plotters who were MPs under Blair and Brown fleeced the taxpayer repeatedly with PFIs. Here’s just one example, via The BBC:

Hairmyres Hospital in South Lanarkshire cost £68m but the contractor will get 10 times that over the next 30 years.

These lot handed private contractors 10 times the public money necessary to build hospitals – leaving the tax payer to foot the bill. Schools, the London Underground and other public services were also victims of the jaw dropping rip-off that is PFI.

Throughout this debacle, Corbyn remained a staunch opponent of privatisation, and his new shadow cabinet are fully behind him:

I've Heard rumours I am pressing Jez to resign – not true, I am not and continue to support him 100%

Labour Party needs to unite behind our leader.We cannot descend into infighting at this critical stage. Lets bring the fight to the tories

Labour is a democratic socialist party whose members democratically elected Jeremy Corbyn less than a year ago. MPs should respect that.

Corbyn is soon to face off against Angela Eagle in the looming Labour leadership election. His supporters can look at further items in her record, beyond PFI, to demonstrate she is unfit to lead the Labour party. For instance, her blinkered support of the so-called free-market. This was epitomised when the Liberal Democrats tabled a motion in April 2008, stating the UK faced an “extreme bubble in the housing market” and the “risk of recession”, to which Eagle replied:

Fortunately for all of us … that colourful and lurid fiction has no real bearing on the macro-economic reality.

Awkward. We all now know that plummeting property prices – the bubble popping – are what set off the financial crash. As blogger Another Angry Voice remarks:

It’s absolutely clear that if anyone had no understanding of “the macroeconomic reality” back in April 2008 it was Angela Eagle.

Now Eagle and the neoliberals have shown themselves the door, Labour is on the verge of being a real, unified opposition that is properly equipped to challenge the Conservative narrative.