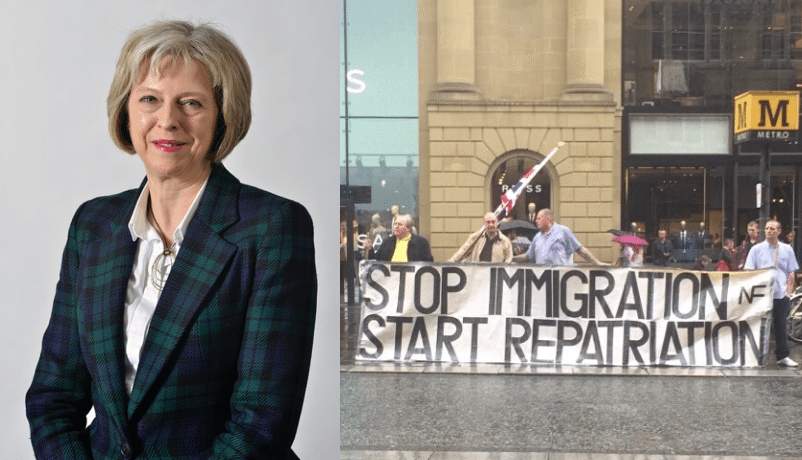 For many who have just tuned into politics in the wake of the Brexit vote and a very unsettling week, Theresa May might look like the lesser evil up against Michael Gove and (formerly) Boris Johnson. But May has become one of the most sinister forces in UK politics during her time as Home Secretary and, if she becomes Prime Minister, her plans for immigrants already settled in the UK are worthy of Donald Trump.

May gave an infamously dangerous speech on immigration at last October’s Conservative party conference. While the Syrian refugee crisis was unfolding, and dead toddlers were washing up on beaches, May chose to give a speech stating that immigration was making a ‘cohesive society’ impossible in Britain. James Kirkup at The Telegraph rightly summarised the speech as follows:

“Immigrants are stealing your job, making you poorer and ruining your country. Never mind the facts, just feel angry at foreigners. And make me Conservative leader.”

The speech was filled with factual inaccuracies and dog whistle racism intended to steer listeners’ wrath at the outcome of her own government’s policies, towards blameless migrants and refugees. Indeed, immediately after MPs voted by 294 to 276 not to take in 3,000 unaccompanied refugee children this year, Theresa May cracked a smile.

UK universities are continuing to suffer from May’s assault on overseas students. In a race to prevent foreign-born students from settling in the UK after they graduate, May pushed through a series of blocks. This clear message that international graduates were no long welcome in Britain had real world consequences. England saw the first drop in international students at its universities for 30 years – with Indian and Pakistani applications dropping by 50%, and EU applications by 25%. This is removing vital revenues from an already cash-strapped higher education system, and stripping the UK of the potential talent and innovation those minds would have brought to our culture and economy.

The Independent also outlines another dark chapter in the history of Theresa May’s six years at the Home Office:

Those in Cornwall will not have forgotten the plight of the Engels family, caught in the 2012 non-European Economic Area family migrants rules. A UK woman and her young daughter had to move to South Africa because the UK woman’s salary was insufficient to “maintain” her South African-born husband – the minimum salary for maintenance, £18,600, was applied by May equally throughout the country, even though Cornwall has a far lower cost of living, and lower average salary, than elsewhere.

Earlier this year, May set the minimum income for migrants settling in the UK at a staggering £35,000. To put this in perspective, the average annual wage in the UK is £26,500, meaning much of the population could not settle their foreign-born spouse in the UK. If a UK soldier, or nurse, met and married someone born outside the UK, they would be forced to settle in another country.

So it would come as little surprise that when May was asked about the fate of EU migrants already settled in the UK, she did not take the opportunity to reassure them that they were safe and welcome. When addressing the same issue, Scottish First Minister Nicola Sturgeon said:

I want to take the opportunity this morning to speak directly to citizens of other EU countries living here in Scotland – you remain welcome here, Scotland is your home and your contribution is valued.

When Theresa May was asked on Thursday about the fate of EU migrants in the UK, and whether EU migrants would be welcome in future, she said:

“it will be part of the negotiation” between the UK and EU.

Reaction to May’s comments came swiftly from some commentators.

T May has thrown into the mix the right of EU migrants currently in UK to stay here. Says negotiation with EU will determine this. <<Sig

We are faced with the threat of the repatriation of people living here. Absolutely chilling. https://t.co/L6MstdrFpW

This comes at a time when hate crimes against immigrants and non-white Britons have spiked, and the far-right is calling for the repatriation of all foreign-born citizens and non-citizens living in the UK.

This is a dangerous and pivotal moment in our history, and the last thing Britain needs is a Prime Minister who has staked her career on hiding her failures behind anti-immigrant propaganda. May would be a disaster for Britain in many ways. She has a patchy history on LGBT rights – having voted against equalizing the age of consent, repealing the hated Section 28, and against gay people adopting children in the past. She has also pushed a snooper’s charter through parliament which gives authorities unprecedented access to spy on the general population. We can look forward to a more authoritarian, divided, austerity-blighted, Britain if May succeeds in her campaign.

If you’d like to learn more about the odds-on favourite to be our next Prime Minister, you can read past articles about Theresa May here.