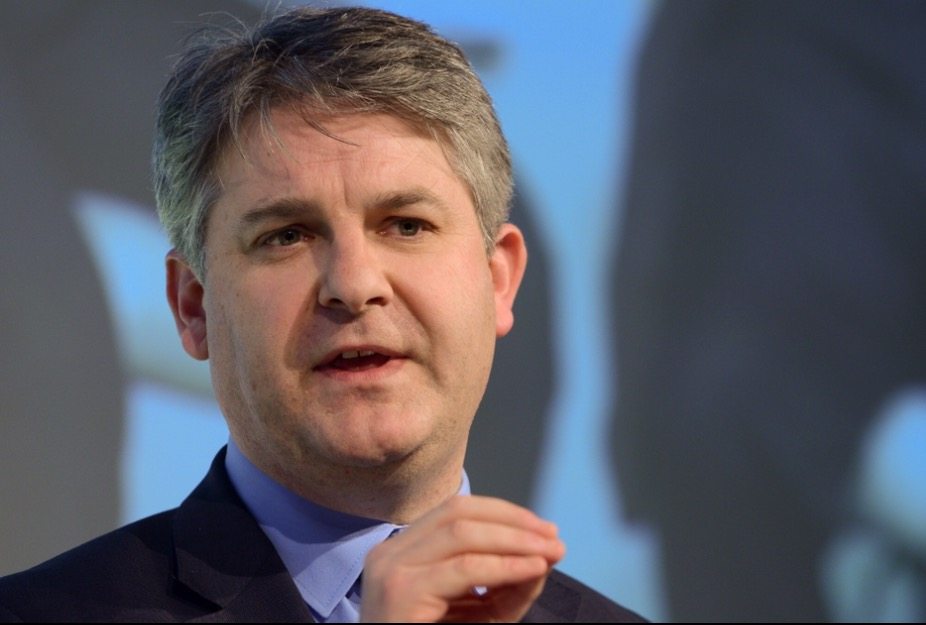 A Yorkshire woman who wrote to her MP expressing concerns about Brexit received an astonishing response. The reply from Conservative MP Philip Davies, literally treats his constituent with “contempt”.

The woman, named Catherine Lunt, was concerned by the results of the EU referendum on June 23rd. She felt the whole process caused a constitutional crisis, and virtually abandoned the UK to a one-party state. She was concerned by the financial implications and faltering economy, and was alarmed by the surge of racism and bigotry that the right-wing Brexit campaigns unleashed.

Catherine also believed many across the UK did not fully understand the implications of what was widely accredited a “protest vote”, and were deceived regarding pertinent facts. (Some fallacies started unravelling as early as the next morning.) She believed the vote was too close, and considering all factors, that Brexit was too much of an unknown entity to enforce upon a confused and divided populace.

On this basis, Catherine wrote to her local MP, asking him to oppose the implementation of Article 50 (which would trigger the commencement of a two-year process of withdrawing from the EU).

Whether one agrees with Catherine’s analysis or not, most would agree that writing to her MP on this matter was simply an expression of democratic will. However her MP, Philip Davies, Conservative MP for Shipley in West Yorkshire, felt otherwise. Catherine posted his response on social media.

His reply, which The Canary has seen via email, was as follows:

Your views on the EU are perfectly reasonable to hold and which I respect, but I am sorry that you are displaying so much contempt for democracy. You might think that the public were too stupid to understand the truth about the arguments but I disagree. It was always made clear that it would take 2 years to leave the EU and that in the meantime we would negotiate our new relationship with the EU and nothing would change. To therefore suggest that people have been misled 6 days after the referendum is frankly absurd.

The country needs to come together but that can only happen when everyone accepts the result of the referendum. I don’t think that is too much to ask of people. There is not going to be a re-run of the referendum as the Prime Minister has made clear. We have a choice; we can either sulk and talk ourselves into a recession or we can move forward and seek the best possible outcome for the UK outside of the EU as the voters have asked us to do. I will be doing the latter, it is up to others what they wish to do.

Catherine posted the response in a Facebook group called “The 48%” (a group where Remain voters discuss their issues with Brexit) where she felt relatively secure to share her frustrations. She did not post publicly, but granted permission for its discussion by The Canary. 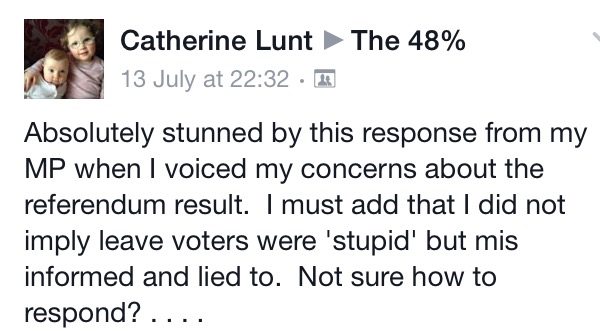 Philip Davies sadly has a history of demonstrating meagre respect for the democratic process. He is known for frequent moves to filibuster legislation he opposes. This means deliberately wasting time allocated to debate bills in parliament to prevent the progress of a bill, by speaking continuously until the time runs out. In fact he’s one of Parliament’s worst offenders, and in recent times attempted to “talk-to-death” motions on:

Philip Davies is surely not best-placed to bemoan those who seek to interrupt the process of democracy, given that he’s made a career out of doing the same.

He also happens to be one of the most openly homophobic and virulent opposers of gay marriage currently pacing Westminster.

It’s not unreasonable that voters should be given opportunity to change their minds on an important issue, particularly if new information comes to light. It’s not “fair” or “democratic” for a populace to be forced to live with an as yet unimplemented decision if it turns out to be regrettable. And what’s more, if politicians subsequently learn with certainty that Brexit undoubtedly will lead to unnecessary and significant hardship for swathes of society, even now they have a duty and responsibility to prevent it – regardless of what was previously determined.

We should remember also, that when the Brexit campaigns thought they would be the 48%, they were already declaring the need for a second referendum. Nigel Farage said he’d call for another referendum in the event of a 52-48 win for Remain, and the very first petition calling for a second referendum was ironically set up by a Brexit supporter who’d predicted a loss. So neither side agreed to simply “accept the result whatever it was”.

Surely, in a this time of uncertainty and worry, MPs like Philip Davies should demonstrate the humility and decency befitting of their office. That starts with showing respect to constituents who’ve taken the time to follow due process. Official Parliamentary correspondence should not be an opportunity to antagonise or gloat, and neither should the privilege of speaking in Parliament become an opportunity to subvert fair debate.

Mr Davies might also wise up to the fact that 48% 0f the nation are not a “minority” to be sidelined. Neither are majorities in Scotland, Northern Ireland, and Gibraltar.