Police treatment of children under scrutiny after another shocking incident - Canary 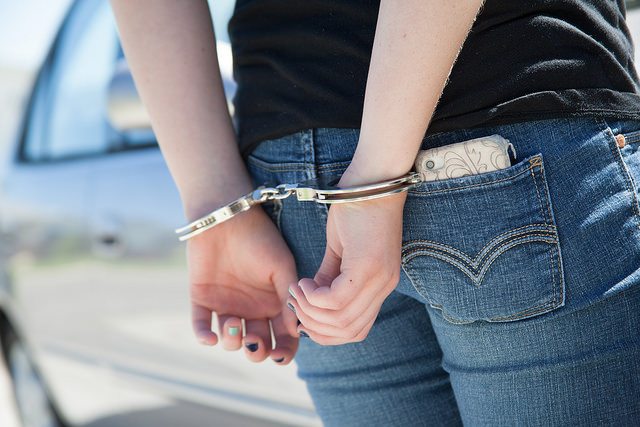 The arrest and detention of a 16-year-old girl has raised concerns once again over the way police deal with minors, after she was kept in custody for nearly eight hours. But the case also poses questions over the effectiveness of cyberbullying legislation.

Emma Reynolds from Nottingham was arrested at her school, unannounced, in January of this year. She told the Victoria Derbyshire programme on Monday that two police officers turned up at the main drive of her school and arrested her – after claims of harassment and cyberbullying manifested into possible threats of physical harm.

I didn’t get to say anything. The next thing I knew they were putting me back in the back of their police car. Other kids saw what happened. Everyone was talking about it – I could tell by the looks people gave me. It felt like everyone was judging me. As soon as I got in [into the police station] they patted me down.

She says she was kept in a cell for around five-and-a-half hours before she was allowed to see her Father. Reynolds commented that:

I had no idea what was going on […] There was like grown men on either side of me along the aisle, like screaming, shouting and swearing […] it was horrible.

Reynolds’ father said he was shocked and worried. When her parents went to the police station, they were refused permission to see her and were sent home – where they found police officers waiting to seize all her “tech”, as evidence of cyberbullying. They then arranged for him to see his daughter later that day.

The case against Reynolds was later dropped. In a statement, Nottinghamshire police said:

It is not normal procedure to make arrests on school property. However, in this instance, the action was judged to be warranted based on the threat and risk from the information available at the time.

Between March 2014 and March 2015, 94,960 young people aged 10-17 years were arrested – accounting for 10% of all arrests. This is the same as the proportion of young people in England and Wales of offending age. Of these young people, 23% were members of the BAME community, with 11% being black. Contrast this with census statistics, which show that 7.7% of the population are from the BAME community – and just 2.8% are black – and there appears to be a disproportionate rate of arrest for people of colour.

There are also strict guidelines surrounding the arrest of minors, which in Reynolds’ case do not appear to have been fully adhered to. The government states that:

Reynolds says that she wasn’t allowed to contact her father, and it would also appear that there was no appropriate adult present when she was being searched and questioned.

However, this is not the only incident to highlight possible failings by the police in terms of the way minors are treated in custody.

The case of “Child H” made headlines earlier this year when an 11-year old girl, who is on the autistic spectrum, was handcuffed, restrained with leg straps and a mesh hood and kept in custody for over 60 hours without an appropriate adult. Investigating, the Independent Police Complaints Commission (IPCC) said:

This was a complex investigation, which found Sussex Police officers failed to respond effectively to the needs of a vulnerable child. While it is clear Child H had significant behavioural problems arising from her disability, Sussex Police and, indeed other agencies which were – or should have been – involved, did not appear to have the skills and capacity to respond to her effectively. The situation was exacerbated by the lack of understanding of Child H’s complex needs.

However, there is also a flip-side to the issue of the arrest and detention of minors. Figures released under a Freedom of Information request earlier this year showed that more than 1,500 child arrests for alleged firearm offences were carried out by police between 2013 and January 2016, with the number increasing by 20% last year – including 506 charges brought by police.

In the case of Reynolds, questions also need to be asked about what prompted another child to make serious complaints to the police – claims that Shauneen Lambe, director of Just For Kids Law, said were “a relatively minor allegation”.

Reynolds had been described as the “ringleader of a hate campaign” against another girl. It would seem logical to believe that the police judged the evidence presented to them strong enough to warrant the arrest of Reynolds, even though the case against her was dropped. Whether or not Reynolds was involved, it’s of concern that the alleged victim didn’t raise the issue at school before contacting police.

An estimated 5.43m young people in the UK have experienced cyberbullying, with 1.26m subjected to extreme cyberbullying on a daily basis. For Lambe to describe an accusation of what was obviously severe cyberbullying as “relatively minor” is wholly inappropriate, especially from the director of a children’s charity.

The case of Emma Reynolds starkly highlights the issues surrounding both the treatment of children by police and the societal problems surrounding both young offenders and alleged victims. While the number of juvenile arrests is falling, institutions and society still, it would seem, need to do more to protect children, in a world where they are growing up quicker than ever.

If you, or someone you know, is a victim of bullying you can contact the National Bullying Helpline on 0845 22 55787.

Volunteer for The Mix – providing essential support for under-25’s.

Donate to the Family Lives charity.