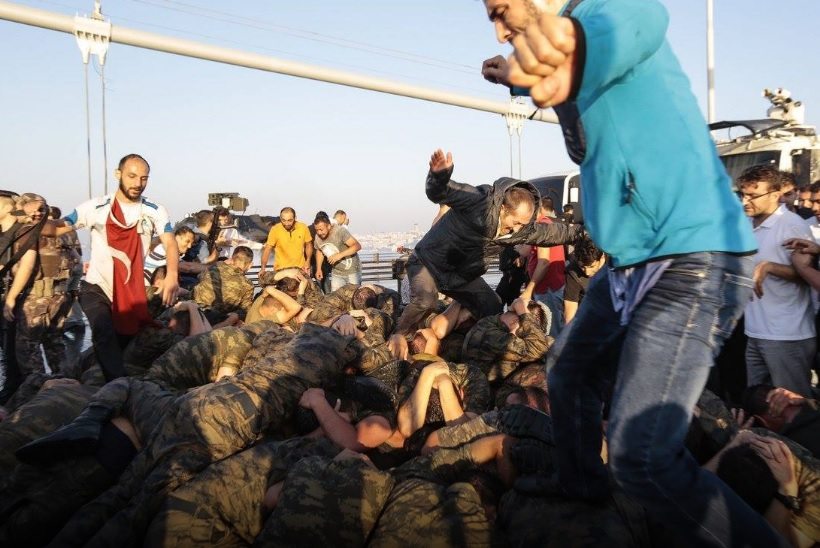 In July 2015, the Turkish government ended promising peace talks with left-wing Kurdish militants shortly after performing badly in national elections. It then ramped up its suppression of media freedoms to conceal the killing of many hundreds of civilians. The spread of war and anti-democratic measures was only briefly interrupted by a failed coup attempt on 15 July 2016, after which Amnesty International slammed Turkey’s “deeply worrying” crackdown on peaceful dissent. Now, Amnesty claims to have “credible evidence” that prisoners are being tortured, beaten, and even raped in official and unofficial detention centres.

Reports of abuse including beatings and rape in detention are extremely alarming, especially given the scale of detentions that we have seen in the past week. The grim details that we have documented are just a snapshot of the abuses that might be happening in places of detention

Amnesty spoke to lawyers, doctors and a person on duty in a detention facility, discovering that detainees had been denied access to lawyers and family members and had “not been properly informed of the charges against them”. They had also been held in stress positions for up to 48 hours, denied food and water, and deprived of medical treatment.

Another way in which prisoners’ right to a fair trial has been undermined is through the government’s declaration of a state of emergency. On 23 July, Ankara issued its first decree under its exceptional new powers, increasing the time prisoners could be held without charge from four to 30 days, allowing officials to “observe or even record meetings between pre-trial detainees and lawyers”, and limiting who prisoners could choose to represent them.

Two lawyers told the human rights organisation that detainees had allegedly witnessed imprisoned military officers being “raped with a truncheon or finger by police officers”. And while hundreds of prisoners showed signs of beatings, the worst treatment like this was being reserved for the highest ranking officials involved in the coup.

If the human rights abuses committed by Turkish-backed jihadis in Syria were already an uncomfortable enough source of shame for NATO, the fact that they’re now being committed fairly openly in Turkey is the putrid icing on a particularly disgusting cake.

According to Dalhuisen, the government has so far “remained conspicuously silent” about these alleged abuses. And for him:

He also insisted that many prisoners were being held arbitrarily and illegally, without proof of any criminal wrongdoing, stressing that:

These highly irregular, and seemingly systematic practices, must be investigated.

A taste of things to come

The current government in Turkey has ruled since 2002 under the tutelage of Recep Tayyip Erdoğan (who became president in 2014). Its political platform has been a toxic mixture of neoliberalism, religious conservatism, and ethnic nationalism.

Turkey has long been accused of torture and other human rights abuses in its prisons. And in the last 15 years, the Turkish prison population has increased from around 59,000 to about 187,000. The most prominent allegations of abuses usually involve Kurdish political prisoners. Human Rights Watch has also expressed concerns about:

the widespread impunity that prevails in Turkey for enforced disappearances and extrajudicial killings by suspected state perpetrators.

At the same time, it insists:

Impunity for serious human rights violations in the past and in the present remains an entrenched problem in Turkey and needs to be addressed as a matter of great urgency.

In short, Turkey has a poor track record on human rights, and that appears to be getting worse rather than better under the country’s current regime.

With journalists and academics now being detained in the government’s crackdown on dissent, it’s not only coup plotters who face abuses at the hands of state actors. And that’s very bad news for Turkey as, instead of easing tensions and seeking to forge a pro-democracy front against military intervention, the Turkish regime is dividing society even more.

It looks like we’re in for much more of this in the weeks and months to come.

– See other international articles from The Canary.