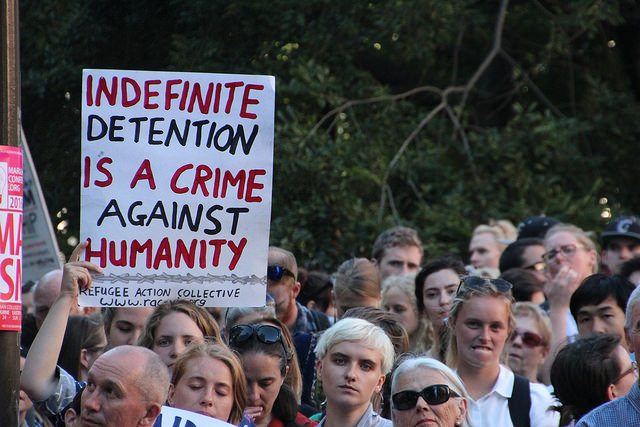 Leading legal experts have advised Ferrovial, the Spanish multinational company, that it could face prosecution for ‘crimes against humanity’ for its management of Australia’s offshore refugee and asylum-seekers detention facilities on Nauru and Manus Island (Papua New Guinea).

Ferrovial has been warned by legal experts at the prestigious Stanford Law School (USA) that its directors could face prosecution and its financial backers be held liable, with damages running into millions of dollars.

Earlier this year, the PNG Supreme Court ruled that the detention by Australia of refugees on Manus Island is illegal. According to the asylum seekers at Manus, following the Rudd government’s announcement in 2013 that no asylum seeker arriving by boat would be settled in Australia, they were forcibly deported to PNG by the Australian Government.

They also claim that their detention on Manus Island constitutes arbitrary and indefinite detention, which is illegal under international law. Their allegations of misconduct include negligence relating to duty of care contributing to the death of Reza Berati, who was killed during a riot at the centre in February 2014.

The PNG supreme court stated in its judgment that it had been “the joint efforts of the Australian and PNG governments” that brought the asylum seekers to PNG and kept them at the Manus Island processing centre “against their will”, and that their detention had been illegal from its inception. PNG lawyer Ben Lomai is seeking around A$110m in compensation for the detainees.

A legal firm in Australia has also instigated prosecution for ‘crimes against humanity’ against the Australian government in the High Court. There are also four submissions under examination in the International Criminal Court, accusing named Australian government ministers of being guilty of similar crimes.

This latest move suggests that “Individual officers at Ferrovial might be exposed to criminal liability for crimes against humanity under the Rome Statute,” said Diala Shamas, a clinical supervising attorney at the International Human Rights and Conflict Resolution Clinic at Stanford Law School.

Currently there are 843 men held on Manus Island, and 466 people, including 50 children, in the Nauru detention centre. Most have been there for three years.

There has been a documented 300 cases of children committing or threatening self-harm, 67 cases of child abuse, 33 cases of rape or sexual assault of asylum seekers, 200 cases of assault and 30 cases of abuse against Australian staff – and that’s just on Nauru.

Sub-contractor Wilson Security has been additionally accused of handcuffing children, assaulting asylum seekers and much, much more.

An Australian Senate report into abuse at the Nauru asylum-seeker detention centre made grim reading, providing evidence that could be used against the contractors.

In purely business terms, the detention centres can be characterised as the end ‘product’ in a supply-chain of what many would argue is illegal activity that begins with the Australian Navy & Customs highjacking boats on the open seas, kidnapping their passengers, then imprisoning them on the gulag. As such, Broadspectrum and Wilson Security share responsibility for what has happened (the latter company has already admitted to scores of cases of abuse).

While asylum seekers and refugees are in Australian territory or under Australian jurisdiction, the Australian Government has obligations regarding several international treaties to ensure human rights are respected and protected. These treaties include the International Covenant on Civil and Political Rights (ICCPR), the International Covenant on Economic, Social and Cultural Rights (ICESCR), the Convention against Torture and Other Cruel, Inhuman or Degrading Treatment or Punishment (CAT) and the Convention on the Rights of the Child (CRC).

Refugees’ rights include the right not to be arbitrarily detained. As a party to the Refugee Convention, Australia also agreed to ensure that asylum seekers who meet the definition of a refugee are not sent back to a country where their life or freedom would be threatened. This is known as the principle of non-refoulement.

Australia also has obligations not to return people who face a real risk of violation of certain human rights under the ICCPR, the CAT and the CRC, and not to send people to third countries where they would face a real risk of violation of their human rights under these instruments. These obligations also apply to people who have not been found to be refugees.

Under the International Covenant on Civil and Political Rights (ICCPR) articles 6 and 7, Australia has an obligation not to send someone to a place where their life may be in danger or where they may be subject to cruelty or inhumane treatment. If it is shown that asylum-seekers are subjected to cruelty or inhumane treatment at Nauru or Manus Island then the Australian Government would be in breach of the CAT (Convention Against Torture) and that would have an impact on the supply chain (Ferrovial, etc).

In March last year the United Nations Special Rapporteur on Torture found that various aspects of Australia’s asylum seeker policies violated the Convention Against Torture and other cruel, inhuman or degrading treatment or punishment.

The findings from the Special Rapporteur, Juan Mendez, were formally submitted to the UN Human Rights Council. The UN report found that Australia’s indefinite detention of asylum seekers on Manus Island, the harsh conditions, the frequent unrest and violence inside the centre and the failure to protect certain vulnerable individuals all amount to breaches of the CAT. The report also found that the recent amendments to the Maritime Powers Act, which give the Australian Government unprecedented powers to detain and return asylum seekers intercepted at sea, violates the CAT.

“Under international law, Australia can’t lock people up incommunicado on a boat somewhere in the middle of the ocean. Nor can we return people to a place where they face the risk of being tortured. Yet these are precisely the powers the Government has sought to give itself through recent amendments to its maritime law,” commented Daniel Webb of the Human Rights Law Centre (HRLC).

Rachel Ball, director of advocacy at the HRLC, said Ferrovial also had obligations under the United Nations’ Guiding Principles on Business and Human Rights to respect international human rights standards. She said:

The company cannot evade responsibility simply because the violations are sanctioned by the Australian Government.

Those men, women and children held arbitrarily on Nauru and Manu Island are being detained there for political reasons. As such, they can – and must – be recognised as Australia’s offshore political prisoners.

Perhaps it is time that Amnesty International, which has also condemned these offshore detention practices, goes that one step further and names every person held in these centres as political prisoners.