The UK government is waging secret wars, and Corbyn just laid out a bold plan to stop them - Canary 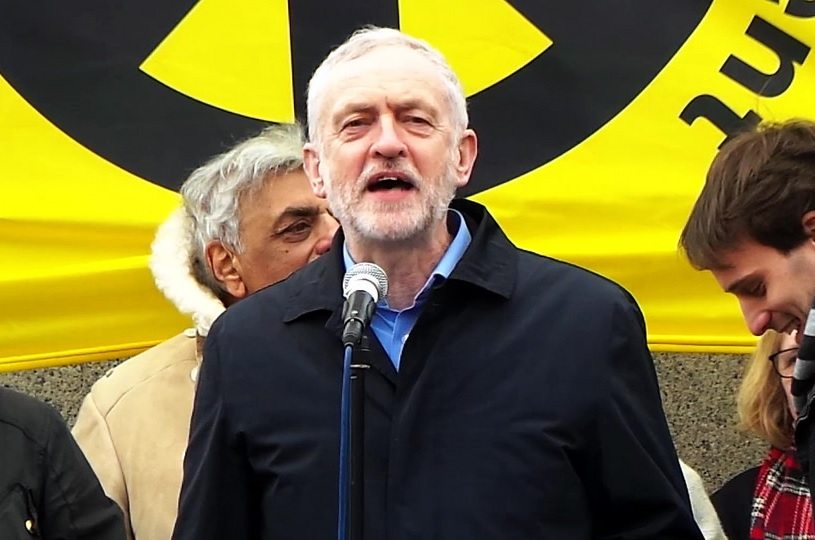 The UK government is waging ‘shadow‘ wars in a number of countries around the world. These conflicts are invisible to the naked public eye because they’re never put before parliament. But Jeremy Corbyn just laid out plans to ensure they will be in future, which would severely inhibit a prime minister’s power to drag the country into future conflicts without voter consent.

This is exactly the type of proposal from Corbyn that terrifies the establishment.

Libya is one of the countries where the UK is currently involved in a military offensive. This war rarely reaches the headlines, other than to provide “push-button propaganda” that creates a disturbing picture of the country in the public’s mind – a necessary foundation from which further military action can be justified in the future.

This war has not been approved by parliament because it doesn’t have to be. Although it has become conventional practice to seek parliamentary approval for high profile military activities, such as the Syrian airstrikes ratified in December 2015, more covert operations – often involving special forces – are undertaken at the discretion of the prime minister and other relevant ministers.

Corbyn wants to change that. In an interview with Middle East Eye, the Labour leader was asked about this military loophole and responded:

Except – and they’ve all used the except – when there are special forces involved. The question of this of course goes back a long way to Vietnam 1963, when the US managed to have I think 50,000 advisors to the South Vietnamese government before Congress was even invited to vote on whether or not it should be involved in the Vietnam War. I think the parallel is a very serious one.

Corbyn continued, saying that “clearly Britain is involved” in Libya. In the case of this particular country, he acknowledges it’s “through special forces”, but he also addresses the UK’s complicity in conflicts in other countries:

[Britain is involved] through arms supplies to Saudi Arabia to the war in Yemen. And indeed by the same process to the supply of anti-personnel equipment that is being used in Bahrain by Saudi Arabia. So I think we have to have a War Powers Act that is much more watertight on this.

Plans were afoot for a war powers act, which would have enshrined the necessity for parliamentary approval for such activities in law. This was a policy David Cameron defended when in opposition but, under his leadership, the Conservative government rejected the idea in April. The then defence secretary Michael Fallon explained why, saying that ministers do not want to be:

artificially constrained in action to keep this country safe

Fallon considers it ‘artificial’ to allow MPs to determine when certain military action is necessary. The current system is one whereby the government must only “keep parliament informed” and seek approval when it deems appropriate. It has the power, under the prime minister’s royal prerogative, to avoid any democratic scrutiny on the military choices it would rather keep private.

The fact that the government is determined to retain this power is no surprise. As Corbyn notes, Britain supplies arms to Saudi Arabia, a controversy over which it is currently facing legal action. That these profitable weapons, totalling £7bn of sales since Cameron took office in 2010, may have been used in war crimes in Yemen is not something the government wants to shout from the rooftops.

But such secrecy is prone to abuse. In fact, in the case of arms sales to Saudi Arabia, the government has just had to amend statements about its supposed investigations into war crimes by the country, because they turned out to be false.

Previous statements alleged that the government was examining whether Saudi Arabia was committing war crimes in Yemen, and that no evidence of such crimes had been found. But it turns out that was just a fabrication, as no investigations have actually taken place. As Amnesty UK’s Arms Programme Director Oliver Sprague commented:

This is jaw-dropping stuff. The government has admitted grossly misleading parliament no fewer than six times on issues as serious as the deaths of civilians in Yemen.

The government has spent most of this year telling us that assessments had been conducted and it was confident that no breach of international law had occurred – when it’s now apparent no specific assessment of Saudi operations had been done whatsoever.

In other words, the government’s ‘phantom’ investigations allowed UK arms to keep flowing to the Saudi regime.

That’s the price of government secrecy.

By contrast, Corbyn wants transparency. He advocates a system where the government is held to account by its parliament and the people it is meant to represent. He believes that a war powers act should be the “absolute minimum” response to the Chilcot report on the 2003 invasion of Iraq, and that what we now know about that catastrophic war “might end up changing the course of history in the way in which major political decisions are made in this country”. And he has stressed:

Whether “popular involvement” in military decision-making, which would certainly mean less war rather than more, is seen as a “good thing” depends on who you are. Citizens of the world blighted by UK interventions would likely approve. Citizens of the UK who oppose the ceaseless wars being carried out in their name surely would too.

Daesh (Isis/Isil) would be mortified by the prospect, as it would bulldoze its entire grounds for existence. And those who wage wars, with the geopolitical power and massive profits they bring, would despise the idea too.

The proposal gives a clear indication of what a Corbyn-led government would look like: with citizens having a say in the government’s direction in matters of both war and peace, even if it would diminish the personal power of a future Prime Minister Corbyn in the process.

Take action with the Campaign Against Arms Trade.

Attend events organised by the Stop the War Coalition.

Read other articles here about Libya, and the US military campaign in the country here.