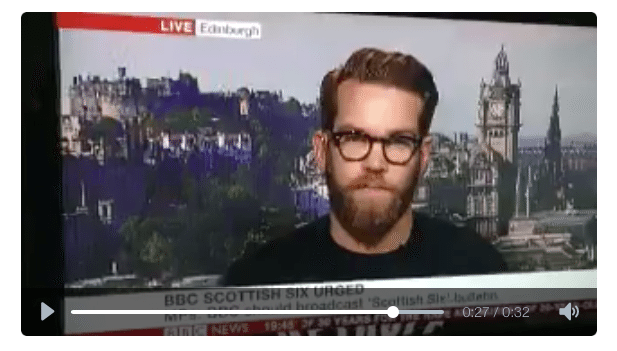 Plans are underway for BBC Scotland to produce a Scottish six o’clock news hour, edited and produced in Scotland. But one BBC pundit has revealed a fairly derogatory reason he believes Scotland can’t manage its own new programme – because Scottish people can’t handle video cameras.

The decision to create ‘Scottish Six’ was announced by the BBC this week, with a report on its website stating:

The BBC should press ahead with plans for an hour-long “Scottish Six” TV news programme, Westminster’s culture committee says.

BBC Scotland has produced pilots for a programme which could replace Reporting Scotland and the Six O’Clock News in Scotland.

MPs said it was “perfectly reasonable” for editorial decisions on broadcasts in Scotland to be made in Scotland.

A BBC spokesman said it was “exploring a number of possible formats”.

But during a slot on BBC News, Herald reporter David Torrance gave a bizarre reason to can the project, saying:

As I say, anyone who’s been involved in broadcast professionally will realise that. So, a couple of people who support Scottish Six are making that point – it works on radio, why not on television? – I think that’s a huge red herring.

wheeling out all the unionists to tell us we are too stupid pic.twitter.com/PieEKLSN3s

The implication of Torrance’s statement is that no one in Scotland is aware of the differences in producing audio and video content or has the requisite skill set to manage the latter. Apparently, Torrance has entirely forgotten that television itself was invented by John Logie Baird – who happened to be Scottish. The nation has a proud tradition of creating compelling TV and film, respected the world over – from classics like Alfred Hitchcock’s The 39 Steps, to the Wickerman, Gregory’s Girl, Shallow Grave, Trainspotting and the Bond movies.

It should therefore come as little surprise that there was a fairly immediate and visceral reaction to Torrance’s comments.

1926: First television is invented by John Logie Baird in Scotland
2016: Case against #ScottishSix is difficulty of using video cameras

The writer didn’t want to stick around for any more discussion about his comments on Scotland’s TV production capabilities.

Translation: "I made a total arse of myself on TV about #scottishsix so I'm away to hide under the duvet for a week" pic.twitter.com/oTtt0fElJa

It is important to note that Torrance’s views were left unchallenged on the BBC news programme itself, glossed over entirely. The rigorous work of holding pundits to account for their views was once again delegated to viewers. But don’t worry, it looks like Scotland has this whole situation in hand.