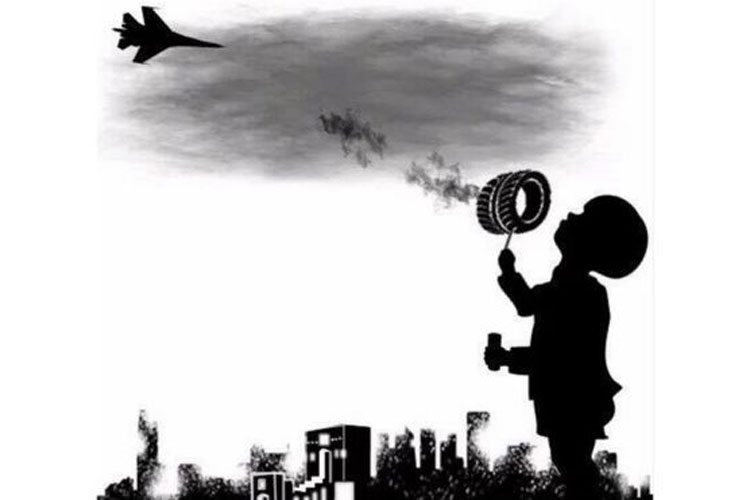 The Syrian city of Aleppo has been under siege since last month, when the Syrian regime cut off all supply lines to rebel fighters and citizens. However, a co-ordinated counter-offensive by rebel factions, apparently planned for months, was reported on 2 Aug. It is being called the Battle of Aleppo, and a “major pivot point” in the Syrian conflict.

According to Unicef, there are 2.5 million child refugees who have fled Syria, and 6m affected who remain in the country. It’s estimated that 250,000 people are currently under siege in rebel-held cities. And of those children who remain in besieged cities, some have taken up a new method of protecting themselves and their families.

Airstrikes by the Syrian government continue to be carried out on rebel strongholds, joined by Russian fighters who are intensifying their bombing campaign. Rebels continue to fight back, attempting to regain control of ground and/or access to vital supplies. As a result of the escalating conflict, such cities have been largely destroyed, and Aleppo is no exception.

Doing what they can to protect themselves, Syrian children are burning tyres in Aleppo’s city streets in an effort to forcibly create no-fly-zones for Russian and government jets. The thick black smoke obscures the view of pilots, and is apparently effective at preventing them from carrying out bombing.

It’s causing confusion for the jets and a diversion for the offensive on the ground that aims to break the siege.

Everyone is doing it but to participate in the resistance this is really the only thing the children can do.

One man has created a video ‘apologising’ to environmentalists for the burning tyres’ effect on the ozone layer. He explains and apologises for the situation, and then declares:

We’re very sorry please forgive us, but you have all turned your backs on the Syrian people.

We apologise to environmentalists for burning tyres to protect ourselves from #Assad_Putin’s warplanes!! #Syria pic.twitter.com/s1WFlaTQOb

The freedom to disengage from political activism is a privilege. Most of the rest of the world can’t disengage – they’re on the frontlines of politics, everyday, whether they like it or not, and for many it’s literally a life or death decision. Political apathy may be the result of understandable frustration. But not acting contributes to the political status quo.

Children in Syria, participating in the only safe way that they can, are demonstrating that by the time someone is forced to choose to ‘participate’ in politics, it’s often too late.

Granted, the limited acts we can take might not ‘achieve’ anything immediate, except taking a stand and making our politics visible. But enough people participating creates mass movement, and mass movements are required to change the status quo. A person refusing to participate ‘because activism is ineffective’, ensures that person is ineffective.

Those of us who can, but won’t, participate must ask ourselves if our decision is the right one. Because over and above the moral imperative to participate, all action and inaction will contribute to the creation of our future, whatever it might be.

Learn about the peaceful, equality-focused Rojava movement in the region.

Put pressure on your MP or the Prime Minister to help bring peaceful resolution in Syria.

Stay informed via the Syrian Revolution Network on Twitter.

Support refugees by donating to a charity or volunteering at some of these links.