UKIP just threw itself onto the political scrapheap, thanks to a technical error - The Canary 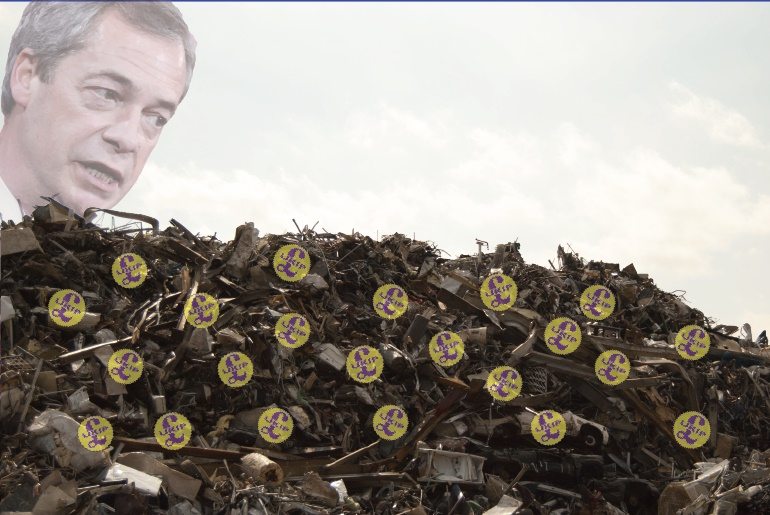 UKIP may have consigned itself to the political dustbin of history on 3 August, as the front-runner in the leadership contest to take over from Nigel Farage, Steven Woolfe, was ruled out on a technicality. This put the party’s ruling body at odds with its biggest donor, and created the threat of a total meltdown.

The party was left in turmoil after Woolfe, MEP for North West England and UKIP’s economics spokesman, was thrown off the leadership ballot after the party’s National Executive Committee (NEC) claimed that his application arrived 17 minutes too late. This means that the candidates in the contest are largely all unknown quantities.

The NEC decided on 2 August that the nominations for the leader’s title will be:

Woolfe vs the NEC

Woolfe, who has always been one of the more visible UKIP MEPs, appearing on BBC Question Time on several occasions, denounced the NEC’s decision. He insists he can prove that the £5,000 fee required to participate in the contest was transferred before the deadline, saying:

I did feel like I was in a scene from Little Britain’s ‘computer says no’. But at 11.35 yesterday I managed to be on my phone to my bank to prove the £5,000 had been transferred over. I was actually on the phone with one of the Ukip officials at four minutes to 12 telling them I’m pressing the button for submit and he was saying, ‘We can’t see it, take photographs of it,’ which I did. I sent them at eight minutes past.

Woolfe, while actually admitting that his nomination fee was sent late, claims this was due to a technical error by the NEC, saying that he had problems with the system on Friday:

it proved to me what I’ve said in this campaign, that the party systems and operations have not been working for the party and this system has had complaints before and we really need to professionalise.

Regardless, the NEC seemingly ignored his protestations, and kept him off the ballot anyway. In a statement, it said:

An NEC-led panel sat on Tuesday afternoon to determine the eligibility of those that submitted nomination papers to stand to be Ukip’s new party leader […] By a clear majority of NEC members Steven Woolfe MEP’s application was considered to be ineligible as a result of a late submission and as such he did not meet the eligibility criteria. His membership of the party was not in question.

Woolfe hit back, saying that:

the NEC has proven it is not fit for purpose and it confirmed many members’ fears that it is neither effective nor professional in the way it governs the party.

But in wishing the remaining candidates well, he appeared to concede defeat – after it had been rumoured that he would take legal action against the NEC decision.

Opposition to the decision

Others in the party have not been so gracious, prompting rumours of an internal war over the forthcoming leadership contest. Tim Aker, MEP for the East of England, commented that he was “appalled” at the decision, saying “this isn’t over”. Three members of the NEC immediately resigned, citing “personal ambitions, loyalties, jealousies and escalating megalomania” as the driving force behind the decision to exclude Woolfe.

But it’s Arron Banks, a major UKIP donor who gave £1m to the party in 2014, whose reaction is probably the most crucial. Banks told Channel 4’s Michael Crick that:

It’s going to end in full scale civil war in Ukip. There already is full-scale civil war. Maybe Ukip’s run its race. Only Ukip could do it worse than Labour. It takes some doing. They are in full meltdown.

Indeed, with Labour currently in the midst of a controversial leadership battle, it would appear that UKIP has gone one better (or worse). Because if Banks withdraws his support, it may well see the end of the party. He has already said that he wishes to form a new political entity in the wake of the Brexit vote, after donating £5.6m to the Leave.EU campaign. Talking of potentially stealing UKIP members, Banks said that:

with a million supporters there’s also a wonderful opportunity if we want to do something, to back something. I think a new party, a brand new party.

The end of UKIP would be welcomed by many up and down the country. Its brand of politics, which some call divisive, racist and xenophobic, has for many done little more than drag the UK out of the EU while stirring up intolerance and hatred in communities across the land.

But like a bad smell that keeps coming back, Banks’ proposals for a “brand new party” should probably be heeded for what they are: a UKIP Mark II in the making. And with the current surge in hate crime in the UK demonstrating the terrible effect the rise of the far-right can have, whether UKIP survives or not, its ideology and its ilk must still be opposed.

Support HOPE not Hate, campaigning for tolerance and an end to extremism.