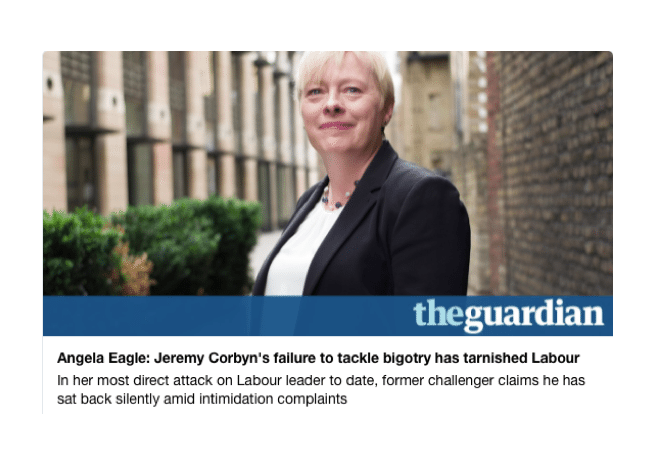 Angela Eagle published another smear on Jeremy Corbyn supporters in The Guardian this week, entitled “Jeremy Corbyn’s failure to tackle bigotry has tarnished Labour“. Here is why I, and those unfairly maligned in this piece, have nothing to learn from Angela Eagle on this issue.

Eagle’s short-lived Labour leadership campaign was blighted by false accusations of bigotry against Labour supporters who didn’t want to vote for Owen Smith (or her) as leader.

Despite all this, The Guardian still grants Eagle a platform to continue a smear campaign which has been found, time and again, to be entirely baseless.

But there is something more galling about all this. Those who dare to criticise Eagle for this behaviour in a public space are being accused of either a lack of understanding of the impact of bigotry, or worse, of being bigots themselves.

Yea how terrible she is for pointing out the hate?! She's as Blairite as @OwenJones84 https://t.co/IgOGCM59Ep https://t.co/lij2e5CSQq

We’re now in the position where a bunch of largely white, largely middle class, London-centric commentators and politicos are preaching to working and middle-class voters from all over the country, from all ethnicities, sexualities, gender identities and life journeys – that they are the ones in need of lessons on diversity.

I happen to be an LGBT, working class woman of colour. My grandad came to this country in the Windrush generation, having fought for the Commonwealth in World War 2. When he arrived in Bristol, he married a white woman. My Nan was disowned by her family for marrying him. My mother and her siblings were the ‘piccaninnies’ Enoch Powell railed against in his Rivers of Blood speech.

Thankfully, I was a punchy young girl, so no one called me those things twice. But it happened. I was aware of being different, and chose to embrace that. It was so clear to me that I was never going to fit in that I never felt a pressure to try. That’s a privilege of sorts – a masterclass in being independent and courageous in the face of no agreement. But that privilege came with costs. Random acts of violence and abuse, feeling the atmosphere change when walking into an all-white or all-black space, having to think about whether it’s safe to show affection to my wife in public, and so on.

It is because of my personal experience of very real prejudice that the weaponisation of my lived experience of it by a cynical political campaign is intolerable. And I’m not alone in this. The reaction to Eagle’s article across the Left echoes that feeling.

THIS from the woman who supported bombing Iraq and the killing of women and children. https://t.co/Sx81trDYGw

Nevertheless, the almost entirely white, middle class, London-centric commentariat seized on this new piece from Eagle to once again lecture the rest of us on how lacking in diversity we were – just as with their previous allegations of antisemitism. And woe betide anyone who asks, however politely, for the commentariat to stop using their lived experience as a political football.

Hodges is not Jewish. This is a privileged, white journalist attempting to school a Jewish person in antisemitism – and in the most crude and offensive terms.

Of course, this dynamic seems almost entirely lost on the commentariat – who regard themselves as the gatekeepers of social liberalism. Never mind that UK media outlets are almost exclusively white, male and middle-class, with over a third living and working in London. Somehow, they have a better handle on diversity than the rest of us. As The Guardian itself reported recently:

The British journalism industry is 94% white, 86% university-educated and 55% male, according to a damning survey of 700 news professionals conducted by City University London.

Researchers reported that just 0.4% of British journalists are Muslim and only 0.2% are black. Nearly 5% of the UK population is Muslim and 3% is black.

City’s research indicates that women are paid significantly less than their male counterparts. Nearly 50% of female journalists earn £2,400 or less a month compared with just a third of men.

In politics, things are even worse. As The Guardian reports:

The average MP is still a man, aged 51 (as has been the case since 1992), and, somewhat predictably, is most likely to have previously worked in politics. A third of MPs went to fee-paying private schools (compared with the national average of about 7%).

These two institutions of the UK establishment – themselves plagued with racism, sexism, classism and homophobia – dare to assert that the real threat of bigotry rests in one of the most progressive and broadest political movements this country has seen in decades (if ever)? This is beyond farce.

No. I will not take lessons on bigotry from this moribund political and media establishment, and neither should you.

Featured image via the Guardian