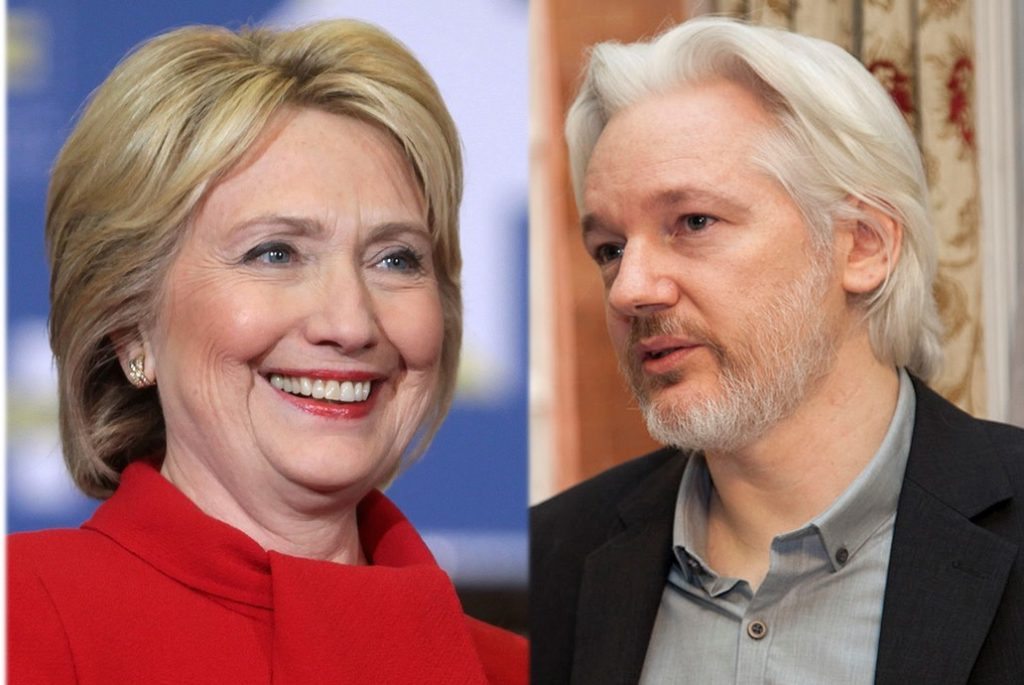 WikiLeaks founder Julian Assange recently spoke about Hillary Clinton’s time as Secretary of State. What he said put the Democratic candidate for the US presidency at the heart of the mess currently engulfing Libya and Syria.

Earlier in 2016, WikiLeaks created a searchable archive of over 30,000 emails and attachments sent to and from Clinton’s private email server while she was in the prominent role. Now, on the verge of releasing highly sensitive government emails demonstrating the part she played in arming anti-Assad jihadis in Syria, Assange told Democracy Now!:

the disastrous, absolutely disastrous intervention in Libya, the destruction of the Gaddafi government, which led to the occupation of ISIS of large segments of that country, weapons flows going over to Syria, being pushed by Hillary Clinton, into jihadists within Syria, including ISIS, that’s there in those emails.

Clinton continuing a well-established US tradition

While the world awaits more evidence that Clinton was involved in transferring weapons from Libya to Syrian jihadis from 2011 onwards, this strategy should surprise no one. Under Ronald Reagan’s presidency in the 1980s, the CIA happily backed jihadis in Afghanistan which would eventually turn into the Taliban and al-Qaida. And the jihadi conflicts in Chechnya, Bosnia and elsewhere were allegedly an extension of this campaign.

There were apparently US plans to destabilise Syria from at least 2006 – when George W. Bush’s disastrous ‘war on terror’ was still in full flow. The only difference in strategy under the Obama administration was that more invasions like Afghanistan and Iraq were completely out of the question, so Washington had to rely heavily on its warmongering chauvinist allies in Saudi Arabia, Turkey and Qatar to do most of the leg work in Syria.

And this is precisely why jihadi gangs like Daesh (Isis/Isil) and Jabhat al-Nusra – which have ideological and funding links to the US allies mentioned above – soon came to dominate the anti-Assad opposition (of which around 60% is currently thought to have similar extremist views to Daesh).

Under Clinton, then, Bush’s plans of overthrowing Assad were simply put into motion. As Assange told ITV in June, Clinton:

has a long history of being a liberal war hawk, and we presume she is going to proceed

Her most notorious scandal – Benghazi – was surrounded by speculation that the CIA was involved in moving arms from Libya over to Syria. Clinton has long denied any knowledge of such transfers.

In a Canary article on 29 June, however, we reported that Clinton used to be a director and legal adviser at French industrial giant Lafarge, which is now a regular donor to the Clinton Foundation and has been accused of paying taxes to Daesh in order to operate its cement plant in Syria. And her connections with Lafarge – which has also allegedly bought Daesh oil for years (like western allies in Turkey and Israel) and once helped out with a CIA-backed covert arms export network to Saddam Hussein – simply add more fuel to the fire of criticism aimed at her. But then, no one should really be surprised by the west’s historic connections to Hussein’s regime by now.

With a new US military operation now beginning in Libya, the destabilising impact of overthrowing dictators using jihadi militants is more evident than ever. But could the world really expect Clinton to diverge much from the policy status quo of the US military establishment when her main opponent’s alleged obliviousness towards the military has left her as the leading ‘patriotic’ candidate in the upcoming presidential elections?

Is Trump any less of a ‘war hawk’ than Clinton?

In this year’s presidential race, foreign policy could well be a decisive issue. But the fact that much criticism has been levelled at Clinton doesn’t mean her Republican contender Donald Trump should be let off the hook.

Trump has not only shown – through his words, actions, and policies – that he’s a pathological liar with sexist, racist and authoritarian tendencies. He has also revealed his very simplistic international outlook and his disdain for human rights.

He repeatedly speaks about how he’d “bomb the hell” out of Daesh-controlled oil fields and then “get Exxon” and other “great oil companies to go in”. When questioned in July 2015 about what would happen to civilians near these oil-rich areas, Trump simply replied “Oh, give me a break”.

And he doesn’t just feel comfortable around civilian deaths. He also appears to have no problems at all with the use of torture against detainees, having said in February that he’d:

Here, Clinton is in fact much more in tune with expert opinion than Trump, as numerous experts have explained how torture is usually both counterproductive and ineffective.

But Trump hasn’t stopped with civilian deaths and torture. He has also said:

Regarding this comment, even Israeli counter-terrorism experts have taken a step back, with one former consultant to Benjamin Netanyahu (a possible war criminal himself) saying:

Any deliberate attacks aimed against civilians is a war crime, regardless if they are family members of terrorists

In short, Trump is no better than Clinton. But that doesn’t mean the Democratic party hasn’t made a Trump victory much more likely by choosing a candidate as tarnished as Clinton to lead its race for the White House.

See other Canary articles about Hillary Clinton, Bernie Sanders, and Donald Trump, and more of our international articles here.