Corbyn can win elections, and these forgotten communities are showing the way - Canary 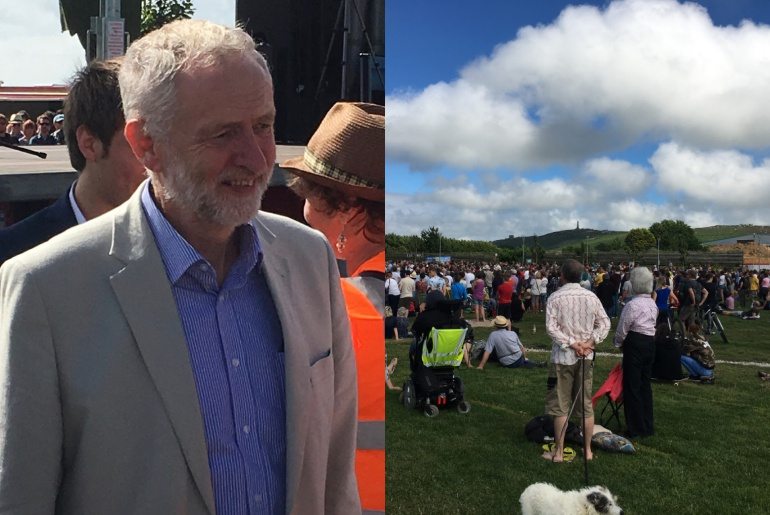 Cornwall is often ignored by the political elites. Our idyllic coastline and picturesque villages make great holiday destinations for them, but hide the poverty and deprivation that locals face on a daily basis.

Despite this deprivation, Cornwall has been a dead zone for Labour for decades, with the party pushed into a dismal third place in most elections. Prior to 2015, there was a strong Lib Dem presence, but since the last election, the map of Cornwall has become a sea of blue.

But something is changing. Since Corbyn took over the leadership, support for the Labour Party has surged, and new branches have formed across the county. And this surge was evident during the first weekend of August, when thousands turned out to hear him speak.

These were not the numbers seen in traditional Labour areas such as Liverpool, but they were significant. If Labour, under Corbyn, can attract a substantial following in Cornwall where Labour has been a pretty much non-existent political force, then it shows what is possible; it shows that, despite the media hysteria, there is a chance of him gaining votes – and gaining votes in unlikely places.

And unlike Owen Smith, who according to his upcoming events page doesn’t seem to think the South West matters enough to warrant a visit, Corbyn directly addressed the issues facing Cornwall. He stated:

Corbyn directly addressed some of the areas of greatest concern for the region including wages, zero-hour contracts, public transport infrastructure and access to high speed broadband. But his main focus in talking about the region was housing:

It’s not right in seaside towns and areas where the tourist industry is at its strongest the only time you can rent a decent flat is in the winter months when there’s no holiday lets available and then you have to move out and try and survive somewhere else. There has to be an investment in housing all across the region.

Cornwall is one of the poorest places in the UK, with a GDP 75% below the average of other European areas in the period between 2007-2013. Despite this, due to the demand of second homes, average property prices are £210,000, 10 times the average wage. Recently, a referendum in the popular tourist destination of St Ives voted overwhelmingly to ban second home owners from being able to buy properties in new developments.

Corbyn spoke passionately about the poverty in Cornwall and the steps that could be taken to alleviate it – a fact many politicians like to ignore:

The idea is that in the national narrative poverty is a city issue, prosperity is a rural issue and Cornwall is an idyllic place, a great place to come on holiday. Yes, it is a great place to come on holiday and I love visiting. But that’s not the point. The point is there are many village communities with chocolate box beauty about them hiding desperate isolation and poverty in those villages.

He also addressed the issue of second home owners:

What they’ve done in St Ives and other places in challenging the whole question of second home ownership and the ghost like appearance of villages dominated by second home owners has to be addressed with secure housing for the entire community. That is best done by public investment in it.

Unfortunately, this is one area where he didn’t go far enough. Promises to build new social housing are much-needed if we are to provide secure accommodation for the nearly 100,000 children across the UK who are homeless. The right to buy has eroded housing stock – and further Conservative policies will make this even worse.

But building new houses won’t stop villages becoming ghost towns in the winter. It will mean the ‘chocolate box’ villages will be left for the rich second home owners while locals are forced into out-of-town new developments which will be virtual ghettos for the poor.

Any housing policy which truly addresses the needs in Cornwall has to radically address the number and the price of second homes, and the knock-on effect this has on the rental market. It cannot be acceptable to have one in three properties being second homes, as they are in areas like Fowey and Lostwithiel.

In order to reclaim our towns and villages, not only is investment needed in infrastructure and in new social housing. There also need to be higher taxes on second homes so they are not such an attractive option. Rents have to be capped to reflect average wages, and children need to feel that there are opportunities for meaningful work and housing in the place they’ve grown up.

But this may be something to work towards. In the meantime, it is refreshing to see a political leader addressing rural poverty, and proposing practical solutions.

Labour has gone from being an insignificant party in Cornwall to being a contender in elections. In fact, according to Corbyn, Labour has seen the most significant gains in support in the South West – more than almost anywhere else in the country:

We’re not just going to be here a couple of times in this campaign, I want to see the Labour Party fully engaged because we’ve got the biggest growth in membership by proportion of almost any region in the country in the South West.

It wasn’t just the ‘usual suspects’ at the weekend rally. Among the crowd were family members, neighbours, friends, colleagues – people from all areas of life who wouldn’t normally attend a political event, but wanted to see Corbyn speak; people who are desperate for an alternative and a narrative which addresses austerity and the problems facing our communities.

Whether or not Corbyn and parliamentary democracy as a whole can provide this alternative is another argument. But what is clear is that people do want to engage with a different type of politics. And it may be in the forgotten political landscapes, such as Cornwall, that this change, and even a possible election victory, can be delivered.