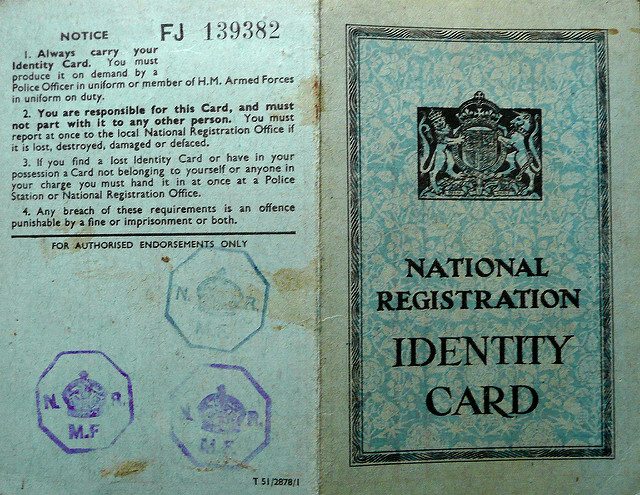 A leading figure from Policy Exchange, an influential UK thinktank with extensive links to the Conservative right and US neoconservatives, has published a report that proposes, post-Brexit, that Britain adopts an ID system. The same report also argues for a two-tier citizenship system.

The report’s author is David Goodhart, who was the founder of the Prospect journal and is currently its “Editor at Large“. In the Policy Exchange report Immigration & Integration After Brexit, Goodhart proposes (in section five) the introduction of a “population register for all citizens (and non-citizens) incorporating a unique person number”. He suggests that the NHS number be used as the national ID unique identifier, or that an entirely new identifier be created.

Integrating various government databases held by HMRC, the NHS, the Department for Work and Pensions (DWP) and so on would be crucial to the new ID scheme, argues Goodhart:

Currently the various different databases of DWP, HMRC and the Home Office do not speak to each other and most of us have several unique identifiers – NHS number, National Insurance number and passport number for example – that are stored in different places.

Other databases, such as police and DVLA databases, could no doubt be added in due course to create a ‘super ID database’.

In addition, Goodhart proposes that there should be two-tier citizenship, with access to services limited to British citizens. Others – foreign students and guest workers – would be given “temporary” citizen status only, but would not be able to access social services or claim “political rights”:

A temporary citizen should not be a full member, should not have full access to social and political rights (and would not have an automatic right to bring in dependents) and should leave after a few years.

These ‘temporary citizens’, as Goodhart calls them, would be required to carry biometric ID cards:

We also now have the experience of running biometric residence permits for some non-EU temporary migrants and that could be extended relatively quickly into some kind of ID card for all those without permanent residence.

Policy Exchange was set up in 2002 by right-wing Tory Francis Maude. Michael Gove was its first chair. It is known as David Cameron’s favourite thinktank, and Boris Johnson has endorsed it. Many Conservatives, including current Prime Minister Theresa May, have spoken at Policy Exchange events. As The Spectator wrote just months ago:

Its alumni are dotted in various positions around government.

In 2007, Policy Exchange infamously produced a report – ‘The hijacking of British Islam’ – about the threat of extremism, but BBC’s Newsnight later argued that documents used in the report were forgeries.