I've just been to one of those Jeremy Corbyn rallies, and now it all makes sense [VIDEO] - The Canary 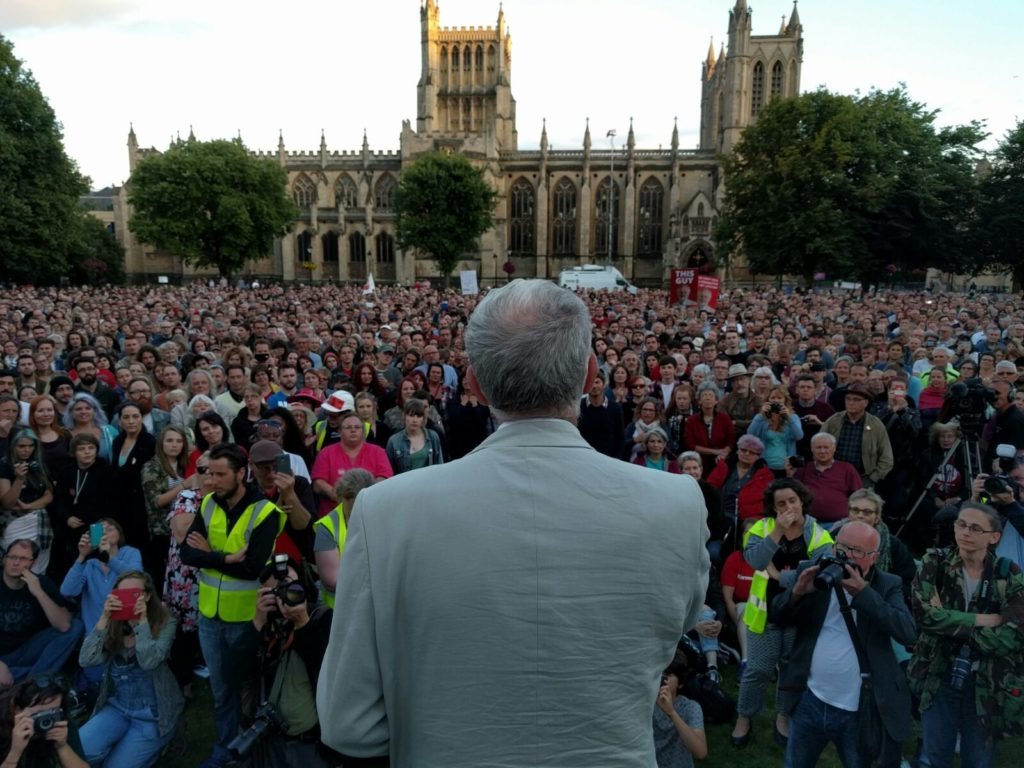 On 8 August 2016, Jeremy Corbyn and his team arrived in my hometown of Bristol to hold a rally. What I found was thousands of lit up, engaged and politically literate people from all backgrounds, ethnicities, ages and incomes who had one thing in common. They had been reminded, or had discovered for the first time, that they can change the world.

I grew up in Bristol, the LGBT granddaughter of  a Caribbean immigrant who married a white woman in the 1950s. My family is a patchwork of colours, cultures and experiences. But all of us identify as working class and grew up in working class neighborhoods. I think my journey to this Jeremy Corbyn rally is not dissimilar to the others who gathered there.

The rally was due to start at 7pm on College Green, outside the splendid Bristol City Council building and Bristol Cathedral in the centre of the city. We arrived at half six to find people already mingling and the stage being erected. Within 20 minutes, the entire green was chockablock.

The mood was striking. People were chatting to each other, to people they knew and to strangers, and they were talking… about politics! Politics, economics, the future of their children, the fate of the nation. The type of conversation that was perceived (particularly by my beloved Bristolians, we’re a humble lot) as the preserve of those ‘qualified’ elites (university-educated, professionals, the higher-ups) just months ago is now starting to be viewed, as it should, as a conversation for us all.

We are all subject to the policies and precociousness of governments. Our informed attention and engagement in matters of housing, education, transport, the sciences, technology, public health and how Britain behaves internationally is the foundation stone of our democracy. Without it, we don’t have a healthy democracy; we have what we’ve had for the past few decades – a nation led by a small, privileged elite. With the best will in the world, a government (and a pundit class) picked from an unrepresentative sample of Britain, cannot hope to deliver on the diverse needs and aspirations of us all.

Several of us from The Canary milled about the crowd, asking people why they were there and what drew them to Jeremy Corbyn’s policies. What we heard most often were these points:

Overall, the mood was very much: we’ve spent a long time feeling alone and despondent. Now we have hope. We can win, and we can use that win to transform this country for the better.

There were several speakers before Corbyn. The highlights included the following:

A 14-year-old activist took to the stage, and thanked Corbyn for granting her the privilege to speak in public for the first time. She spoke about feeling disenfranchised by Labour’s ruling NEC, who refused to let under-18s vote in the leadership election. She called on the Labour MPs who had mutinied against Corbyn to see sense, telling them:

Local Labour councillor Hibaq Jama gave a resounding speech that focused on the role of the media in creating a toxic view of anyone who believed in the basic idea of sharing.

A female refugee spoke to the crowd about the role of politicians and the media in creating barriers between people rather than breaking them down. She said, to wide applause:

The media want to divide us.

We have to send a message. We need to stand together.

Diane Abbott gave a barnstorming performance which focused on mental and physical health, her remit as shadow Health Secretary. Abbott began her speech by reviewing Bristol’s part in the great movements of the 20th century: the labour movement, the civil rights movement, and so on. She took a moment to honour the memory of the late veteran Bristol Labour MP, Tony Benn, saying:

I was in the council building behind me earlier today. Inside is a bust of the late, great Bristol MP Tony Benn. Tony would be proud of Jeremy Corbyn today.

Abbott later focused on what she described as the crisis of mental health in Britain. According to a Samaritans study from 2014, over 6,500 people are killing themselves each year in the UK.

A recent report by researchers at Oxford and Liverpool universities found links between austerity policies, mental health crises and suicide. The report found that the stress of the Atos Work Capability Assessment (WCA) process was the likely cause of 590 suicides and 279,000 cases of mental illness. It was also linked to an additional 725,000 antidepressants that were prescribed. Experts warned that the WCA may have “serious consequences” if people are moved off benefits.

Abbott argued that this status quo must be stopped, promising that:

Under a Labour government led by Prime Minister Jeremy Corbyn, mental health would finally be given parity of esteem with physical health.

This won a large cheer and applause from the audience.

When Corbyn came to the stage, it felt less like a political rally and more like a concert. I’ve never seen Bristolians respond to a politician like this. Applause, cheers, genuine excitement.

Corbyn’s delivery was passionate, at moments genuinely angry, and powerful. He led the audience through the way each pillar of British democracy and society, and the post World War II welfare state, was undermined by austerity and neoliberal politics. On trade unions, collective bargaining and creating more cooperative workplaces, Corbyn said:

We need a government that cares about democracy in the workplace as well as the ballot box.

On political engagement, he said:

We want to take politics back from elites. So all of your knowledge and imagination has impact.

I saw some moist eyes in the crowd during this section of the speech.

He ended on what appears to be the central mission of Corbyn’s Labour:

Keep heart! Together, we can make this country work for the many and not the few.

No individual, and no community, left behind.

There were several moments during the speech where Corbyn had to pause and wait for the applause and cheering to fade a little so he could be heard.

And like that, it was over. The crowds began to move away, and people headed to chat with Corbyn and figures from the left who they admired.

Look who else I bumped into at the #Corbyn rally tonight? Only Ken Loach! Well done Bristol. pic.twitter.com/LNEaCKUG07

On arriving home, the weight of the day sank in for me.

It was a day that may in some way summarise neatly why this battle in Labour is happening, and why Corbyn is winning.

The coup spent the day losing. First, at the High Court – where its efforts to remove 130,000 members from voting in the leadership election were overturned. Later in the day, Corbyn’s opponents were wiped out in elections for Labour’s ruling NEC. The Corbyn candidates won by a landslide in all six seats.

Kevin McGuire, political editor for the Daily Mirror, entirely lost the plot in reaction to the news that efforts to disenfranchise Labour members had been defeated by the High Court.

Meanwhile, avowed Blairite Luke Akehurst, who had just lost in the ballot to become a member of Labour’s ruling NEC, simply started preparing for the next election.

16 months until CLP nominations open for the 2018 NEC elections.

In contrast, Corbyn’s team spent the day laying out a positive vision for the country, a vision that includes the majority of the people living in our country. This is why Jeremy Corbyn and his team are winning this battle, despite the seemingly insurmountable odds of a revolt by almost the entire parliamentary party and the media commentariat.

The commentariat and the parliamentary party genuinely have no idea what’s happening. They do not understand movements, and they do not understand that the next election is not a replay of 2005. The world has changed radically, the country has changed radically, and the level of engagement in politics by previously ‘unimportant’ groups (so far as their election models suggest) now count.

Labour needs to win an extra 106 seats next election to gain a majority – an almost impossible task. But that almost impossible task becomes totally impossible without a mass popular movement to re-engage the public. Just 24% of people voted Conservative in the last election. 76% didn’t. The Labour right wants to focus on tempting a few of those 24% over to Labour, but Corbyn has his eye on the 76%. That’s the difference.

For Labour to win the next election, it needs a movement. And now it has one.

For a Labour victory to count, it must be used to rebuild a nation devastated by austerity. Now it will be.

It’s time for the mutinous Labour MPs to exercise the ‘grown-up’ politics they demanded from the left of the party all these years. They need to get with the programme, or stand aside. In the words of a Chinese proverb:

You can get involved by joining a political party. Here are a list of parties which promise to develop Britain’s politics and economics in a new way, dismantling austerity and neoliberalism. In alphabetical order:

Green Party of England and Wales