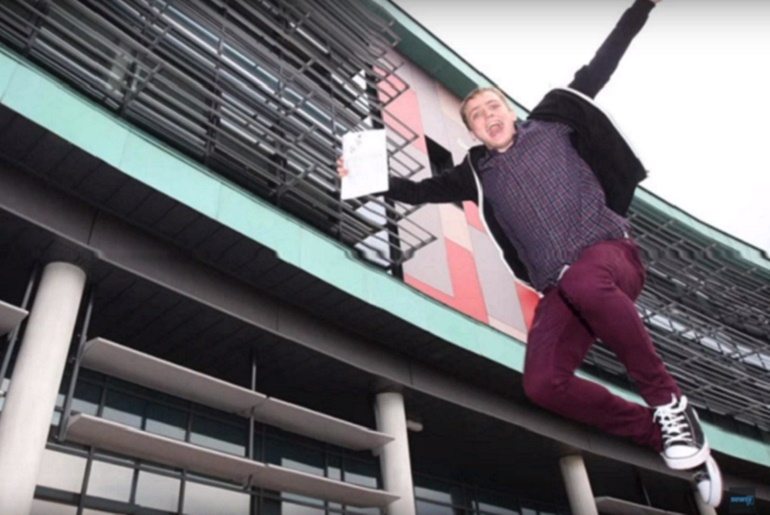 In 2015, homeless student Jacob Lewis achieved straight A*s in his A-levels. He went on to achieve a place at Cambridge University.

With no fixed address, Lewis was forced to sleep on friends’ sofas throughout his studies and exams. Now studying law at Hughes Hall, Cambridge, he hopes to one day become prime minister.

After growing up on a council estate in St Mellons in Wales, Lewis became homeless after a falling out with his family. He initially dropped out of school due to bullying. But even after losing his job at a nightclub, Lewis went on to achieve 100% in his history and law A-levels.

Of his plan to become PM, Lewis said:

Can you imagine that? ‘Homeless kid gets into Downing Street’. I’m being serious.

Lewis now works hard to encourage other Welsh students to apply to Oxford and Cambridge. He is also involved with the Welsh government’s Seren Network, which supports high achievers.

Watch Lewis’ reaction when he received his results:

The story will be an inspiration to many people. It shows what can be achieved with determination and hard work. But it also demonstrates just how lucky Lewis was.

After running into difficulties, Lewis was able to rely on friends for support. Many homeless people do not have the same opportunity. Homelessness is a major issue in Britain. According to the government, 3,569 people are sleeping rough on the streets of England on any one night. That figure has risen by a third in a year.

But these figures don’t take into account the amount of people who rely on housing support. According to housing experts at Cambridge University, the true number of people who are homeless far exceeds government figures. This especially relates to young people.

35,000 young people are in homeless accommodation at any one time across Britain. In 2015, 83,000 homeless young people relied on councils and charities for housing at one point or another. That figure is three times that recorded by the Department for Communities and Local Government.

Lewis’ story, while inspirational, brings to light the situation of the UK’s homeless people, highlighting how the government is failing the majority of them.

Is the government doing enough?

A new report, released by the Communities and Local Government Committee, has found that local councils and authorities are failing to provide enough support to homeless people.

The committee found that the level of support offered to vulnerable people varied significantly across the country. It “recognised that they [the council] face a significant task with funding pressures and legal obligations.” But it stated that “vulnerable people are often badly treated, being made to feel like they are at fault, and offered ineffectual and meaningless advice.” Those who are judged not to be in priority need are often poorly served and sent away.

No-one should be homeless in Britain today, but the reality is that more and more people find themselves on the streets, in night shelters or going from sofa to sofa to keep a roof over their heads.

With welfare cuts, the lack of affordable housing and rising rental costs, homelessness is undoubtedly increasing. Of the rising numbers, Betts said:

The scale of homelessness is now such that a renewed government strategy is a must.

It needs to not only help those who are homeless but also prevent those vulnerable families and individuals who are at risk of becoming homeless from joining them.

The report is now calling on the government to enact a strategy to effectively combat homelessness, and for councils to provide “meaningful support”.

Lewis proves that, with the right support, it is possible to achieve unlikely goals. Yet as the report highlights, more needs to be done to help homeless people and give them the kind of life everyone deserves. But with the current government plans and cuts, it appears another blind eye will be turned.

– Support Bernardo’s as they try and tackle homelessness.

– Get involved and support Julian House.

– See other Canary articles on homelessness.