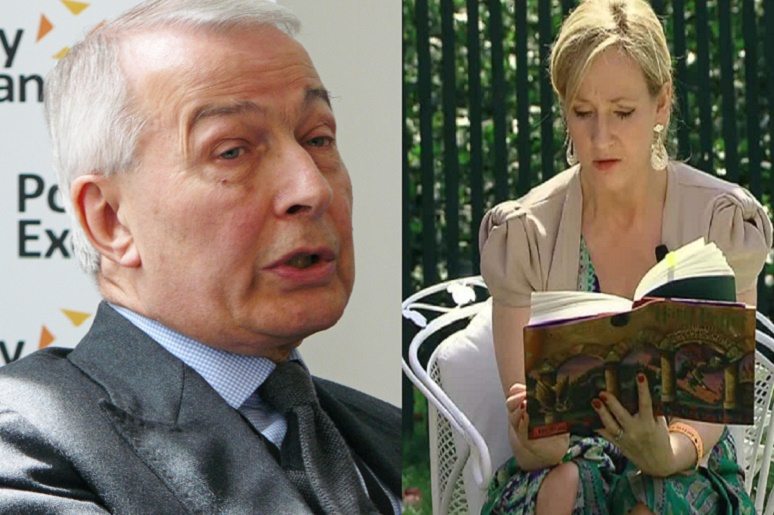 Senior Labour MP Frank Field is the latest MP to wade into the Labour leadership battle, with an extraordinary letter to author J.K. Rowling. And he doesn’t only offer his approval of her public disdain for Jeremy Corbyn. He also proclaims his own opinions on Corbyn’s leadership. Loud and clear.

Rowling is well known for criticising the current Labour leader. On 31 August, she had a public meltdown after a YouGov poll showed Corbyn’s popularity soaring among those who are eligible to vote in the Labour Party leadership election:

One day in the far distant future we'll look back and we WONT LAUGH, LABOUR, BECAUSE THIS ISN'T BLOODY FUNNY.

Now, in a private letter to Rowling, veteran Labour MP Frank Field praises the author for providing a “blast of reality” on the situation:

You hit the nail on the head, and not for the first time, about Corbyn…

So well done for your blast of reality.

Alongside his praise, Field was quick to share his own stance on the issue. Expressing shock at Corbyn’s recent success, he said:

It is remarkable he has got half a million new members.

He goes on to call Corbyn’s Labour an “execution squad of Labour MPs”, saying:

If he [Corbyn] could spell out how this becomes a social movement, rather than an execution squad of Labour MPs… then we will have a step forward.

The accusation fails to address one important fact. The fact that the majority of these MPs resigned. Of their own accord.

Field’s call for a social movement is ironic, given his history. Under Tony Blair, Field was responsible for planning the reform of the welfare state. Believing that you should get out what you put in, Field proposed replacing the welfare state with giant mutual insurance schemes.

And as a member of Parliament for Birkenhead, Field has, at times, shown little regard for those he represents. Even suggesting that their views count for nothing:

Field’s letter is revealing. But Rowling’s response could prove even more telling for her fans. During the EU referendum, Rowling expressed a strong pro-EU stance. And given that Fields was an active Leave campaigner, will Rowling stay true to her word? Will she reject this letter in protest against a Brexiteer, or fall for Field’s gushing praise?