These men were pepper sprayed and arrested, for trying to give away books [VIDEO] - Canary 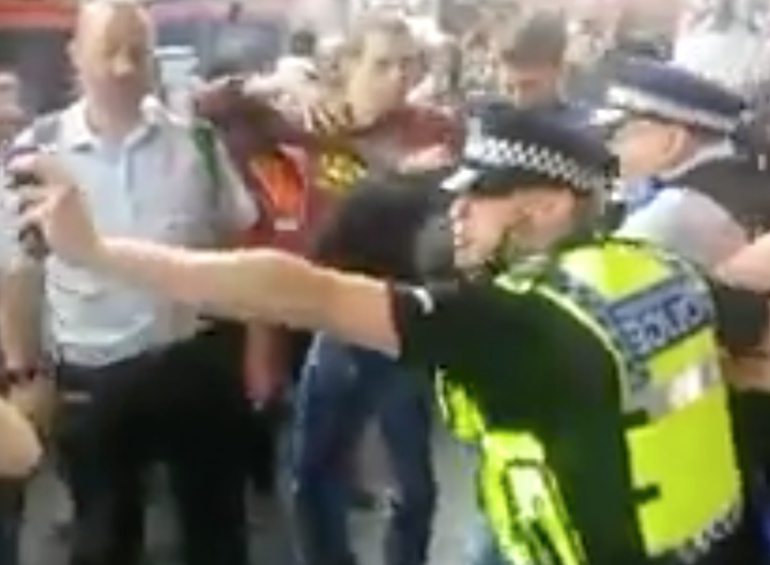 Three men have been violently arrested in Brixton for trying to give away books about black history and culture. Following attempts to shut down their stall, the police used pepper spray, and at least ten officers were involved in the arrests.

Black Child Promotions describe themselves as:

A black owned business with the sincere mission to educate the minds, uplift the spirit and liberate the nation of black people. We can’t afford not to know our history & our current social, economic, physical, mental and spiritual condition on this earth.

The not-for-profit organisation holds regular stalls in Seven Sisters, Brixton, and Stratford, where it gives away books for donations. One of the founders, Sulaiman Lee, said that they “have something for everyone”.

We are targeting Black people to raise awareness in our community. We want people to learn about the history of Black people past and present and be inspired by their stories.

And he believes that books are the best way to do this:

We recognize now that books are a better and more effective way of spreading the information and knowledge to the community.

Arrested for giving away books

But, as the video below shows, this was not an acceptable thing to do on the streets of London:

The council official, who is trying to shut down the stall on the basis that they are selling books, refuses to acknowledge any of the points being made. Lee is seen on the video trying to reason with him:

You can ask any of the community, we haven’t sold one book. If they want to leave a donation that’s up to them. The law states that we can receive and impart information without any interference from any public body.

But the official doesn’t listen, and wants to pack up the stall for them:

In which case I’m going to pack up for you.

Then, when questioned about why he is not shutting down the socialist newspaper sellers, he makes a distinction between being allowed to sell newspapers and books:

There’s a specific exemption for newspapers. This is books. You’re not allowed to do this.

And he again insists that, despite overwhelming evidence from those present, this is profit-making enterprise:

You’re making profit from the books.

We’re receiving and imparting information according to Article 10 of human rights legislation.

Instead of trying to calm down and diffuse the situation, a number of police officers become involved, including plain-clothes officers who push people out the way, deploy pepper spray, and strike the bookstall owner several times while attempting to arrest him.

Below is a video about the project and what it is trying to achieve:

There were angry reactions on Twitter from people who had seen the incident, or knew the book stall:

What the police did to that charity book seller in Brixton yesterday was so unnecessary!Treated like that for doing something so positive! 😔

You know what the mad thing is, those guys are ALWAYS by Brixton station so why is it now they've committed an offence? Lol

There were also calls for a protest outside Brixton police station, and for witnesses and video evidence:

CALL OUT: If you were in #Brixton today and saw the arrest of the book seller outside Iceland. Please email us at [email protected]

A spokesperson for the Met Police said that one person was arrested on suspicion of assaulting a police officer and two more arrested for obstructing the police in the execution of their duty.

Unfortunately for the police, given both offences have to occur while lawfully executing their duty, it is unclear what legal basis they had for shutting down a book stall which has been there on countless occasions and does not make a profit.

Even more disturbingly, some press reports have linked the arrests to a large police operation which was taking place in Brixton against knife crime. And while there is nothing in the reports to suggest the men arrested were in possession of a knife, the subtext is clear. Instead of showing police brutality against people giving away books, there are the allegations of assault against police officers followed by a police-supplied image of a knife recovered at the station.

Police violence is nothing new, especially against people of colour, and this appalling attack on people running an amazing project is, sadly, more the rule than the exception.

People from all communities need to come together to oppose violent racist policing. We are all responsible for what happens on our streets. It needs to be exposed and it needs to be stopped.