Theresa May just declared war on the NHS, with a rant worthy of Margaret Thatcher - The Canary 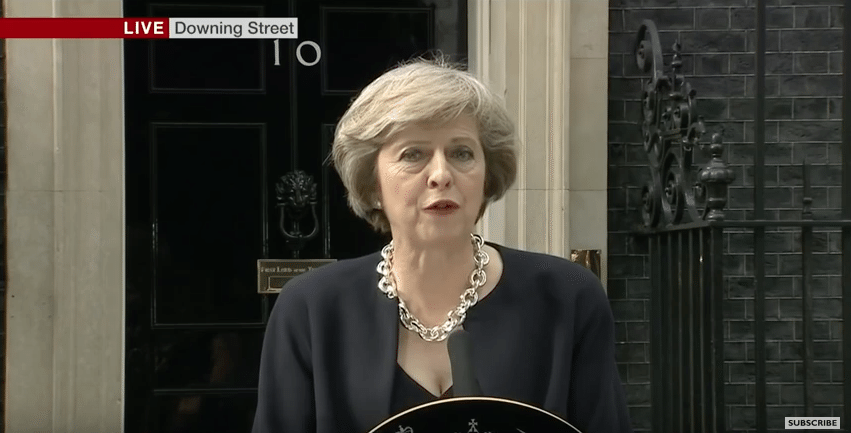 As Margaret Thatcher was to miners, so Theresa May is to junior doctors and the NHS. The Prime Minister has delivered a message to NHS staff that she will crush their attempts to secure safe staffing levels and contracts by all means at her disposal.

Health Secretary Jeremy Hunt has attempted to force new contracts on junior doctors which would extend hours and put patients’ lives at risk, in spite of concerns raised by health care unions, watchdogs and experts. Junior doctors recently announced that a new series of five-day strikes will be taking place over winter, in order to oppose the new contracts.

The reason the strikes have been announced is the continued reluctance of the secretary of state for health to do anything other than impose a new contract on junior doctors, a contract in which junior doctors have demonstrated repeatedly that they do not have confidence

Theresa May’s reaction was unambiguous. Speaking in Solihull on Thursday, May said:

If you look at what we’re doing as a Government with the NHS – we’ve got record levels of funding into the NHS, we’ve got more doctors now in the NHS than we’ve seen in its history and this is a deal that is safe for patients.

The reality for the NHS

So who to believe? A look at the recent history of the NHS reveals just how far May’s description veers from reality.

A 2015 report from the OECD showed that the NHS was chronically understaffed, requiring 26,500 more doctors and 47,700 nurses. This staffing crisis has been the result of decades of underinvestment and piecemeal privatisation, which has had real-world impacts on patient care and staff morale.

Under New Labour, £780m of NHS spending was blown on 70 reorganisations in just four years between 2005 and 2009. The latest major reorganisation of the NHS, under the Health and Social Care Act, sucked another £4bn out of the health service. Anyone experienced in change management can tell you that this level of change, which does not allow for new systems and processes to bed in, or for their benefits to be measured, is simply madness.

The S75 Regulations of the Conservative government’s Health and Social Care Act aim to parcel up NHS services for the purpose of selling them to private providers. These so-called ‘Competition Regulations’ force the NHS to put all but a tiny minority of services out for competitive tender. The majority of services currently run by the NHS will shortly and swiftly be turned over to profit-making private healthcare providers. This is privatisation by the back door. To give just two examples among many:

Southampton Primary Care Trust has outsourced a third of its elective procedures to private providers.

Serco was recently awarded a £140m contract to deliver all of Suffolk’s community health services.

Both areas have seen serious performance issues and large reductions of staff.

A report by corporate finance consultancy firm Catalyst estimated that newly privatised healthcare services will be worth up to £20bn over the next few years. Private companies Circle, Virgin Care and Serco won contracts worth £700m to provide NHS services that same year, and NHS outsourcing to private providers rose by 10%. By 2020, 40% of the NHS will have been privatised.

When companies aren’t being welcomed into the NHS through outsourcing deals or as exorbitantly paid change consultants, they come in through the Private Finance Initiative (PFI). This is where, instead of using government borrowing (at knock down rates) to build hospitals, the government uses private lenders at far higher interest rates.

By 2013, 22 of the 103 NHS trusts to enter PFI were facing financial difficulty due to the sky-high PFI repayments. Some hospitals are having to hand over a fifth of their annual budget on paying for the PFI deal.

Big banks are now setting up shell companies in offshore tax havens, which they use to buy up these struggling hospitals for a pittance. HSBC, recently found guilty of building an entire subsidiary bank to launder money for Mexican drug cartels, now owns three NHS hospitals outright in Barnet, West Middlesex and Middlesex. The shell company set up to buy the banks is registered in Guernsey, so no tax will ever reach the UK treasury.

Why May has so much confidence in Hunt

The contracts put forward by Jeremy Hunt are part of the process of further diluting the terms and conditions of NHS staff, to make the services more attractive to private buyers. Despite the fact that patient care and staff morale have plummeted during this process, their plan is to push ahead regardless.

But why is May continuing with her war on the NHS, and backing a Health Secretary who has the confidence of nobody?

Because the MPs and Lords drafting and voting this privatisation legislation through have a personal financial interest in the outcome. Social Investigations produced an excellent piece of investigative journalism revealing:

In ordinary circumstances, we might well express our dissent to our parliamentary representative – but these are not ordinary circumstances. This government has laid an all-out assault on the NHS, and there will be little left of it by the time they are through. And the anti-Corbyn section of the Labour Party has been entirely complicit in bringing us to this point.

Those who want to save the NHS must recapture the spirit of ’45, and make a stand for it together – refusing to be ignored and to have their collective interests subjugated in favour of an elite minority.

In the words of Aneurin Bevan, the founder of the NHS, the service “will last as long as there are folk left with the faith to fight for it.”