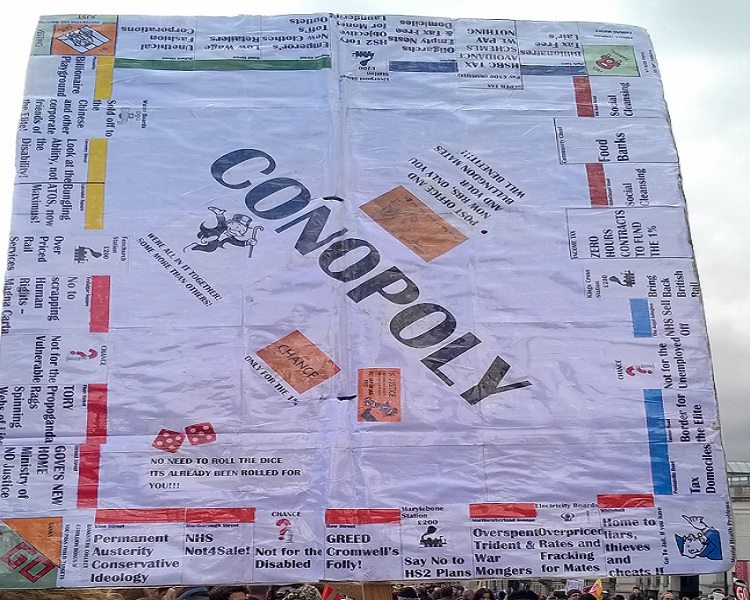 Britain’s biggest ‘fat cat’ boss earned in 45 minutes what the average worker earns in a year, a new study has revealed. Analysis by the Trades Union Congress (TUC) showed that, while an average worker’s wage was just £27,645, it was £3.4m for FTSE 100 directors. And the highest paid boss earned a staggering £70m in 2015. That’s the equivalent to £38,437 an hour. Meanwhile, poverty in the UK continues to rocket.

The report shows that Sir Martin Sorrell, CEO of marketing company WPP, was at the top of the list of fat cat bosses. His £70m pay packet was 2,500 times that of the national average. And put into context, it could have paid for 2,218 nurses, 1,920 paramedics or 4,479 teaching assistants, the TUC said. Furthermore, Sorrell’s pay has continued to rise, while that of his workers has actually fallen.

The analysis found that, while average workers have seen just a 7% increase in pay this decade, the salaries of top FTSE 100 directors have rocketed by 47%. In 2010, theses bosses earned 89 times the average full-time wage. But by 2015, this had risen to 123 times. The gap between low-paid workers and top directors is even worse. The average FTSE 100 top director earned a year’s worth of the minimum wage in just a day.

The highest earning bosses were:

This all comes at a time when 3.9 million people are in “persistent poverty”. That is when someone is earning 60% less than the national median for at least two years. Or, in other words, less than £11,000 a year. Between 2013 and 2014, the overall poverty rate increased to 16.8%. And most worryingly, the persistent poverty rate for children also rose, to 11%.

While millions of UK families have seen their living standards squeezed, directors’ pay has reached stratospheric levels. These shocking new figures show why Theresa May must deliver on her promise to put workers on company boards. This would inject a much-needed dose of reality into boardrooms and help put the brakes on the multi-million pay packages that have damaged the reputation of corporate Britain. Other European countries already require workers on boards, so UK firms have nothing to fear. It improves performance and contributes to company’s long-term success.

While the TUC analysis and stance should be welcomed, some commentators were less enthusiastic. Writing for Evolve Politics, Matt Black said:

I agree with O’Grady in her assertion that UK firms have nothing to fear. Putting a small number of workers on company boards is purely a token gesture and will achieve little in the way of putting the brakes on corporate pay, or more importantly, increasing the average pay of workers at the shop-floor level. It remains to be seen what measures, if any, a free-market Conservative government would be prepared to recommend or impose that could limit the ability of private organisations to set the own rates of remuneration.

The future’s not bright

The future for the average UK worker is not looking bright, either. As The Canary previously reported, analysis shows that the Brexit vote means little good news for most. Forecasts by the Resolution Foundation indicate that, by 2018, each worker will be £615 a year worse off in real terms – that is, when factors like price increases are taken into account. For each household, this equates to, on average, £680 a year.

The Resolution Foundation has also estimated that the reduction in growth means that there will be approximately 320,000 fewer people in work by 2018. While some of this is down to a reduction in the number of migrants coming to the UK, around 220,000 jobs may well be actually lost. Also factor in that the cost of everything is set to go up by around 1.1%, and it paints a bleak picture.

Furthermore, rates of poverty in the UK are also set to rocket. The Institute for Fiscal Studies (IFS) forecast in July that child poverty rates are expected to rise between 2015-16 and 2020-21: by 3% for absolute poverty and 8% for relative poverty. This means that 18.3% of children will be living in the most deprived of conditions measurable by 2020. It also stated that families on low incomes with three or more children are going to feel the brunt of the Conservatives’ proposed cuts to benefits.

Translated into people, rather than just a statistic on a page, this means that 2.6 million children will be in absolute poverty (the poorest of the poor) in four years’ time. The IFS commented that:

The “new poor” tend to live in households where there is someone in work. Only a third of children below the government’s absolute poverty line now live in a workless household – two thirds of those classified as poor are poor despite the fact that at least one of their parents is in work. So if the new Prime Minister takes forward the ‘life chances’ strategy started by her predecessor, that strategy needs to focus on lifting the incomes of working households.

Whether or not the Tories will do anything to help low-paid workers in the UK remains to be seen. But what is clear is that the inequality gap between the top and bottom of society just continues to grow. With nearly a million people now on zero-hours contracts, wages set to fall while poverty is set to rise, rough sleeping up by 102% this decade, and the financial attacks on disabled people continuing unabated, the UK is quickly turning into a two-tier country of ‘haves’ and ‘have-nots’.