John McDonnell gives his most radical speech yet, with this kick-ass response to Tory cuts [VIDEO] - Canary 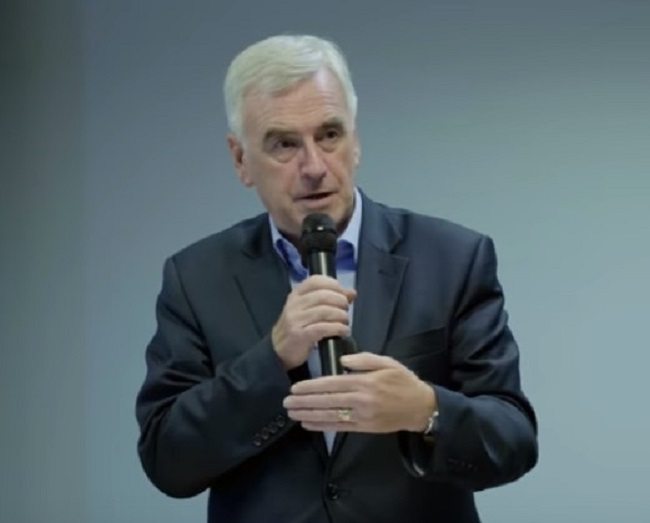 Shadow Chancellor John McDonnell has labelled the shocking rise in hate crime against disabled people a “disgrace” and promised to enact sweeping, radical reforms for them under a Labour government. One which he and Jeremy Corbyn “will have demonstrated [they] are ready for”.

At a global conference on 10 September organised by Disabled People Against Cuts (DPAC), McDonnell spoke of the desperate need to improve the lives of disabled people. This would mean reversing many of the Conservative government’s cuts, and bringing in new laws and policies. McDonnell also talked of the possibility of a Universal Basic Income. And his words struck right to the heart of what the DPAC conference was about: the right to an equal, independent life for disabled people.

“Global Resistance” and “Rights not Games”

Entitled “Global Resistance”, the event in Holloway, London, featured speakers from Canada, Germany, Greece and Ireland. The overriding thrust was that cooperation, both nationally and internationally, was needed. Furthermore, organisation between disabled and non-disabled groups who are fighting austerity and its impact must improve. But the conference was mainly about how to fight attacks on disabled people and their rights.

Disabled people’s rights was an area McDonnell focused on during his speech. He said that DPAC would have a “fundamental role” in advising a Labour government. Under Corbyn, the party would:

make sure we … have in law very specific rights so that disabled people have a right to an income … a right to the appropriate accommodation, a right to access to work when they feel it’s appropriate but in addition to that a right not to be discriminated against. We’ve seen in this recent period that we’ve gone backwards, not forwards. The levels of hate crime against disabled people has been a disgrace to be frank over recent years.

The conference was part of DPAC “Rights Not Games” week of action against the Conservative government. Events included an occupation of a space at the Tate Gallery to display work by disabled artists; the launch of a major report into the effects of the scrapping of the Independent Living Fund (ILF) and a large protest on Wednesday. The demonstration, which blocked Westminster Bridge in all directions for over two hours, attracted national attention. As The Canary previously reported, the police were branded ‘heavy-handed’ by disabled people. Two personal assistants were arrested and one member of DPAC was pushed by a police officer, resulting in her crashing her electric wheelchair into the bridge.

The Shadow Chancellor praised Wednesday’s protest by DPAC. But he went further, supporting the organisation’s use of direct action:

In the past, representations of disabled people have largely been through organisations that went along to government with a ‘begging bowl’ approach. I don’t blame them. But what we needed was an organisation that said, ‘We’re not coming here to beg. We’re coming here as citizens to demand our rights’. And that’s what DPAC was all about.

I made a statement at that [DPAC] founding conference, which got me into a bit of trouble, as usual. I said then … that if you make the representations, through the formal systems of going to see your MP and local council, and you’re not being represented, there’s no other route but direct action. And that’s exactly the policy that was undertaken by DPAC. I think, despite some of the criticisms in … parts of the media, that’s been incredibly successful.

And it’s stories like those included in Monday’s report on the loss of the ILF that show why some feel direct action is needed. Those present heard harrowing accounts of the effects of funding cuts on people’s lives. The former scheme, which helped nearly 18,000 disabled people with high support needs to live independently, closed last year. The government cited that it was “financially unsustainable”. But since it ended, funds have been transferred to local authorities to allocate. And some people have had their money cut by up to 68%.

The direct impact of this was movingly explained by one former ILF recipient:

The Independent Living Fund enabled me to get out of my house, to campaign, to do all sorts of different things. I’ve been Chair of three different disability groups; I went to Glastonbury. But since the closure of the ILF, my council initially wanted to cut my [support] from 12 hours a day to three hours a day. Literally just enough to get me out of bed in the morning, back into bed at night and have one meal during the day. When I said I needed someone to support me going to the toilet during these hours the council said they’d supply me with incontinence pants. If you put a child into nappies who doesn’t need them … and refuse to allow them to use the toilet for up to 12 hours at a time that would be considered criminal abuse.

McDonnell said on Saturday that he was “urging Labour local authorities to ringfence and protect” this funding. He also spoke of Disability Labour, saying that there hadn’t been “satisfactory support” given to it. But he said under Corbyn, more resources would go into the group. This would ensure it became the vehicle within the party to “go out and talk to others” about disability policy. Of a Universal Basic Income, McDonnell said that it isn’t worth examining if people have to “then go out there and buy services” on top. He made clear that:

the [Universal] Basic Income is meant to be for everybody. A basic income that gives them … a decent quality of life. On top of that where there are special [support] needs that people have they should be properly funded and properly serviced.

But this is all in the future. For now, McDonnell guaranteed a Corbyn-led Labour Party would continue to fight against Conservative attacks on disabled people. They would also work closely with DPAC to ensure this fight was as visible as possible.

But it’s a battle that is more complex than it would seem.

As Debbie Jolly, one of the founders of DPAC, said:

The brutality of the benefit cuts is evident. But what’s not so obvious is the effect these cuts have when combined with other factors. For example, the cutting of outlying services has a major impact. The Citizens Advice Bureau (CAB), support groups, charities, mobility, and the NHS. All losing funding. And it’s when these too are “disabled”, that people themselves further are, as well.

The effects go deeper still. When people have their benefits sanctioned or when they are stopped altogether; when they have to be reassessed and when their benefits are altered. All these instances are mentally, and then physically debilitating in themselves. And then there’s the constant drip, drip, drip of negative press; from programmes like “Benefits Britain”, to front page headlines about “scroungers” to politicians labelling disabled people as being worth less than the non-disabled and sneering at them as “charmers”.

It all adds up. As Ellen Clifford from DPAC said on Saturday:

after the protest on Wednesday the media were asking for quotes. They kept saying “so is it about Personal Independence Payments (PIP), or is it about the ILF?” They couldn’t get their heads around the fact it was cumulative.

And it is this cumulative barrage of attacks that is making disabled people angry and heartbroken in equal measure. Because when society targets a particular group of people in this way, they eventually begin to move to the fringes of it. They stop being actively involved in the world around them. And, as is actually happening with disabled people, they become prisoners in their own homes.

This “othering” of a certain group is then complete. They are excluded from society, and as we have seen less than 80-years-ago, it never ends well. It’s a tragic indictment that in 21st century Britain disabled people still have to fight for basic rights. But as one person said parliament on Monday:

We’re all human beings, the same as anyone else. Hopefully one day that will be realised.

And that day needs to come quickly because there is only so much more that disabled people can take. But with groups like DPAC campaigning so doggedly and with the support of McDonnell and Corbyn’s Labour Party, disabled people will no longer tolerate the attacks against them. The fight for their rights is well and truly on.

Images via Let Me Look TV