The media just whitewashed a crucial victory for Jeremy Corbyn, right before the end of the leadership race [OPINION] - Canary Workers’ Co-op

As voting in the Labour leadership contest enters its final leg, the mainstream media appears to have whitewashed an important foreign policy victory for Jeremy Corbyn. A parliamentary report on the 2011 military intervention in Libya, released on 14 September, shows the incumbent was right to oppose it. The inquiry “severely criticised” the intervention by Britain and France.

Corbyn was on the right side of history, again

Given the upcoming Labour leadership election, the foreign policy stance of the two potential Labour prime ministers could be crucial.

When asked at the time why he was one of the 13 MPs to vote against military action, Corbyn said:

I think we should be slightly cautious about going to war on behalf of a group of people who we do not know, understand or are aware of what their aims actually are. Many of them were ministers in the Gaddafi government only three weeks ago.

Leadership challenger Owen Smith, meanwhile, voted in favour of the war in Libya.

Within its damning report, the foreign affairs committee concluded that the risk of extremist groups like Daesh (Isis/Isil) benefiting from the rebellion should not have been “the preserve of hindsight”. Especially given the rise of terrorism following the 2003 invasion of Iraq.

As Corbyn warned, the report also found no evidence that the government carried out sufficient analysis of the nature of the rebellion in Libya, stating that the intervention was based on “erroneous assumptions”.

The limited intervention to protect civilians had drifted into an opportunist policy of regime change. That policy was not underpinned by a strategy to support and shape post-Gaddafi Libya.

Moving the focus away from Cameron

Rather than focusing on what this report means for the credibility of Theresa May, Jeremy Corbyn, and Owen Smith, the media has centred on the negative impact on David Cameron’s legacy: 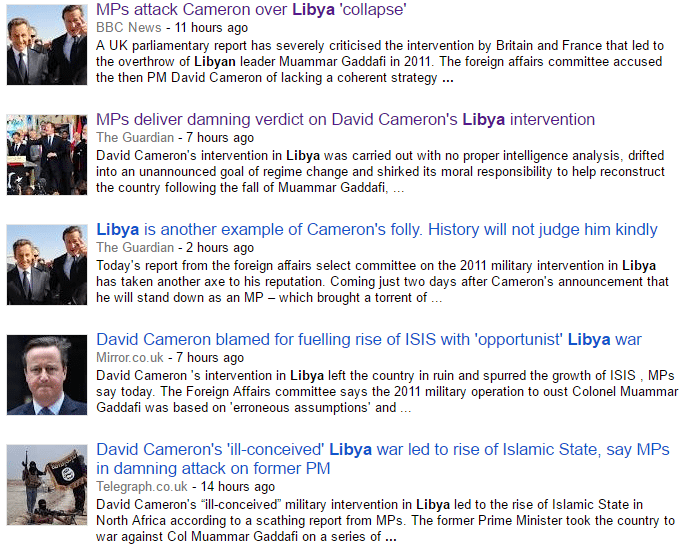 Considering that Cameron is no longer an MP, let alone Prime Minister, the impact this report will have on his legacy is secondary at best. Who knows? Maybe his resignation was planned precisely for that reason.

What is very relevant in light of this damning report, however, is how the present party leaders viewed military intervention in Libya.

While Corbyn staunchly opposed military intervention, May voted in favour of it. She also backed Cameron on military action in Iraq, Syria and Afghanistan, and voted for the 2003 invasion of Iraq.

Corbyn’s closest ally, Shadow Chancellor John McDonnell, joined him in opposing the war. McDonnell did not let the risk of terrorist blowback be the “preserve of hindsight”:

I believe we now face the prospect of a long-haul engagement in military action in Libya. We risk being dragged into an on-the-ground bloody combat, then a counter-insurgency struggle and then vulnerability to a lengthy terrorist campaign. It all threatens the peace and stability of the region then the consequences it will have for our own people and the global economy. That’s why I think the message today from this chamber should be that we seek peace, we want to ensure the safety of civilians and our concern is for peace in the region and democracy for all.

It’s easy to get into a war, it’s much harder to end it. When will all those nations that are taking part know what the circumstances are for pulling out and ending the war?

And Green Party MP Caroline Lucas joined these Labour MPs in voting against the intervention, saying:

Given the West’s colonial past, its history of adventurism and support for dictatorship in the region, its failure to enforce UN resolutions in Palestine and the legacy of the invasion of Iraq in 2003, I think its motives in Libya will always be in doubt.

I don’t think Libya was actually the same as Iraq. You have to be a part of international coalitions to make certain you have the rule of law in the world.

There are no easy answers to these issues but we are part of an international community via the UN, we’re part of the NATO alliance – we have to do what we can to make certain the world lives by international rules and human decency and we ought to keep doing that.

The motive for the war

Eagle’s comments also imply that the reason the UK went to war in Libya was because of a UN security resolution. But Hillary Clinton’s leaked emails tell another story. As Secretary of State, the presidential hopeful was the “prime intellectual author” of the intervention.

Ostensibly, the action was undertaken on humanitarian grounds. But the outcome was far from humanitarian. At present, the human rights situation in Libya is a catastrophe. Children languish in prisons without judicial procedure, and targeted killings are common.

The confidential emails show there were no humanitarian grounds for the conflict. Seven months before the war ended, Clinton’s closest adviser, Sidney Blumenthal, stated that there were no real moral reasons to continue the war:

any humanitarian motive offered is limited, conditional and refers to a specific past situation.

Blumenthal plainly comments that the reasons for the intervention include boosting Obama’s then-dismal approval ratings. The other reasons he gives noticeably leave out humanitarian concerns:

Blumenthal’s memo argues that, for France’s then-President Nicolas Sarkozy, the war was driven by a desire for Libyan oil and a worry that Gaddafi planned to undermine France’s power in the region by establishing a gold standard, among other less flattering motives.

Considering the imperial motives for the war and the disastrous outcome illustrated by the report, Corbyn placed himself on the right side of history by opposing it. Meanwhile, Prime Minister May and Labour leadership hopeful Smith both backed the war. This was in spite of the lack of intelligence regarding the rebellion and the expansionist motives behind the intervention.

National security is an important issue for a future Labour prime minister. While Smith and Eagle backed a policy that ultimately led to a rise in the risk of terrorist atrocities, Corbyn and McDonnell had the foresight to vote against it. The leadership challenger has previously been wined and dined by arms companies, although he now denies this.

Cameron offered no end game, no strategy, and hollow words on humanitarianism. Yet the MP for Pontypridd, who hopes to be the next Labour prime minister, voted the war through anyway. Smith’s support for the welfare bill and military misadventures, along with his long list of U-turns, gaffes and controversies make plain that he is unfit to be Labour leader.

– See other Canary articles on Libya.