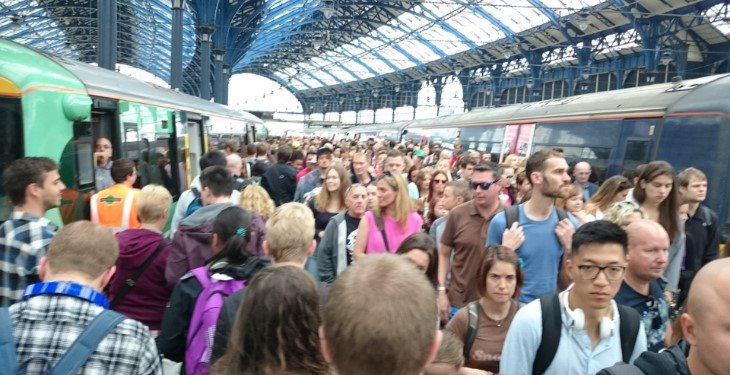 A group of commuters is planning to take the Tory government to court over its terrible handling of the Southern Rail crisis. They have launched a crowdfunder, with an initial target of £25,000. And in just over a week, they’ve already raised £15,000, meaning the Tories could well end up facing legal action.

The Association of British Commuters (ABC) is seeking to bring a judicial review against the Department for Transport (DfT). This is a legal process in which the High Court can review the decision-making process of the DfT. If the government is found to have not fulfilled its duties, the court can make an order declaring the DfT’s actions unlawful. This will stop it continuing in its course of action and require it to take steps to sort the crisis out.

Southern Rail has been in chaos for nearly two years. The network has suffered constant delays, overcrowding on trains and platforms, and a long industrial dispute with the Rail, Maritime and Transport Workers Union (RMT). Commuters and staff alike have expressed outrage at the lack of government help.

As The Canary previously reported, the Tories announced in early September that they would subsidise the private company to the tune of £20m in an attempt to sort out the rail operator’s mess. But there was an almighty slap in the face for passengers and workers alike. Southern Rail had actually just increased its profits to nearly £100m.

The rail operator has hit the headlines repeatedly this year. The parent operator of Southern Rail, Govia Thameslink, is rated as the worst rail company for punctuality, with just 81.5% of trains arriving on time. It was also named the worst rail company in the National Rail Passenger Survey. The Rail, Maritime and Transport (RMT) union is in a protracted industrial dispute with Southern Rail over jobs, working conditions and passenger safety. And as The Canary previously reported, ticket prices are set to go up by 1.9% in England, Scotland and Wales from January 2017.

The ABC firing on all cylinders

The ABC grew out of grassroots efforts among southern commuters – who protested first at Brighton Station, later at Victoria Station, and then at the DfT itself. But after silence from the DfT, and no move towards taking ownership of the chaos, the group decided to take legal action. ABC is seeking legal advice from Devonshires Solicitors LLP and specialist counsel on the options for issuing a judicial review. The solicitors are looking into the circumstances around the rail crisis, with a view to applying to the High Court for legal action.

ABC says of its campaign:

The crowdfunder aims to reach a target of £25,000 within the next 30 days. With extremely generous rates from our legal firm and barrister, we at the ABC will be doing much of the legwork ourselves, in order to make sure the money donated goes as far as possible.

The ABC will be working closely with lawyers to compile evidence of job losses, disruption to home and family and, most importantly, dangers to health and safety. All during the ‘summer of chaos’ in the south of England.

Southern Rail: running out of track?

The legal crowdfunder has the support of Bring Back British Rail and the Campaign for Better Transport. As Emily Yates, campaign co­ordinator for ABC, told The Canary:

With tens of thousands of commuters affected, we have had an incredible response from people offering their skills and resources to fight this ongoing injustice. The generosity and camaraderie of such people has been the only consolation of this chaotic summer and the ABC will not let them down. It’s time to take the campaign to the next level.

With the news this week that Southern Rail may be discriminating against disabled passengers, the chaos at the rail operator looks set to continue. The potential legal action by ABC demonstrates that commuters have had enough of Southern Rail. But more broadly, the appetite for privatisation may well be at an all-time low. If the case goes to court and ABC wins, it could set a precedent across other services. And it could put the UK on track for the renationalisation of its railways.

This article was updated at 9pm on 14 September, to reflect an error regarding the crowdfunding arrangements.