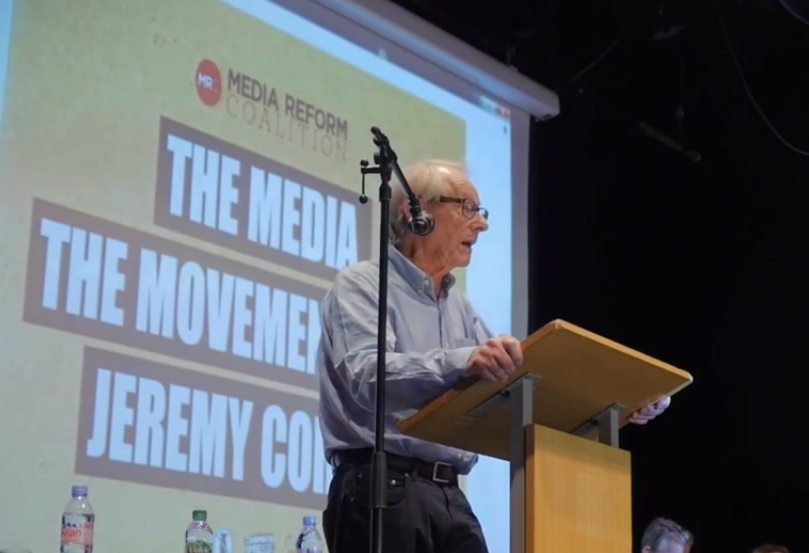 Award-winning film director Ken Loach just proved beyond doubt that the BBC is brainwashing the British public. In an extraordinary speech at the Media Reform Coalition’s recent The Media, The Movements, and Jeremy Corbyn event, Loach laid out the BBC’s indoctrination, and that of other mainstream media outlets, with startling clarity.

And he explained exactly why, in his opinion, Labour leader Jeremy Corbyn has become the establishment’s enemy number one.

The event took place on 15 September and involved a number of speakers, including Stop the War Coalition’s Chris Nineham and Momentum‘s National Organiser James Schneider. As the title suggests, the ‘rally’ was arranged to discuss the media’s reporting on Jeremy Corbyn, his supporters, and “progressive movements more generally”.

Loach began by acknowledging the Media Reform Coalition’s recent research, which found “clear and consistent bias” against Corbyn in online and television news. But, he explained, it’s important to understand what this bias is “in practice”. Loach continued:

How are they [the media] manipulating the ideas that they’re transmitting? How are they attempting to manipulate people’s consciousness? Because I think it’s quite specific.

The award-winning TV and film director first noted the regularity of television news channels having guests on who “will attack Jeremy Corbyn”. But, he claimed, the manipulation is also evident in the way “they put stories together” so that:

there is almost a collage of words, and ideas, and questions, that together transmit the point of view they want you to have.

The evidence to back up Loach’s assertions

That ‘point of view’ is illustrated perfectly by the lack of reporting on the press conferences Corbyn gave over the last couple of weeks. In any “normal election”, Loach said, the policies announced at such events would provide “the basis of the discussion” on election candidates. But they weren’t reported.

He drew attention to Corbyn’s NHS press conference on 24 August. The Labour leader pledged numerous important changes to the health service, such as a promise to renationalise the NHS. But coverage of these promises was scant, with most media attention given to the fact that a reporter asked a question about Traingate during the conference.

Clearly, not reporting the policies Corbyn had laid out could affect the public’s perception of him. Without evidence of such policies, the public may very well conclude that he has none.

It’s not what you say, it’s the way that you say it

Loach also provided a number of examples of reporting on particular issues, where the media’s ‘point of view’ twists the reality of the situation:

Being an MP is not a job for life. But that is not the inference of the way they present it.

He then spoke on the purge of Labour members and supporters since the Labour leadership contest began:

He was purged, and that’s the story they ran… the inference of the story was that it was Corbyn supporters who were doing the purging. That was the inference when we know the opposite is true… that’s an absolute way in which one story, which is absolutely in favour of Jeremy Corbyn, is twisted so that it’s, in a perverse way, worked against him.

Finally, Loach drew attention to a recent story on the critical underfunding of the NHS. He acknowledged that the story was covered widely, but pointed out one telling omission from the coverage:

Isn’t it strange that the junior doctors have been saying this week after week, for months and months and months, and the only question they’re asked is ‘how can you put patients’ lives at risk?’

How come, when there is independent evidence that what they are saying is true, you don’t get a junior doctor within a hundred miles of the BBC? They make certain that the information that you receive is nothing to do with the junior doctors’ strike.

All of these examples show the media, and the BBC in particular, framing stories in a way that encourages understanding, and even sympathy, for the establishment, while making sure that the ‘little guys’ are either disregarded or condemned.

Loach asserted that, in the case of the BBC, that line is taken because it is “an arm of the state”. He claimed that Corbyn in particular is under attack because he “is a real threat to capital”. The profits and money-making ability of private interests, Loach claims, would be impeded under a Corbyn-led government. As would the military-industrial complex that fills the pockets of defence company bosses and shareholders.

The scant reporting on Loach’s speech itself is revealing. A couple of articles were written on his claims, but they only focused on one single point; that Loach had encouraged people to phone the BBC to complain about any bias they witnessed from the broadcaster.

Anyone reading that coverage would be forgiven for thinking Loach is a mere agitator, who advocates harassing the BBC.

But while the public service broadcaster insists that its news “adheres to clear impartiality guidelines”, Loach has laid out a compelling case to prove that this could not be further from the truth.

And it’s a case that people should be aware of when watching the UK’s ‘impartial’ news.

Watch the full speech below:

– Learn more about the work of the Media Reform Coalition.

– Watch the full The Media, the Movements, and Jeremy Corbyn event here.