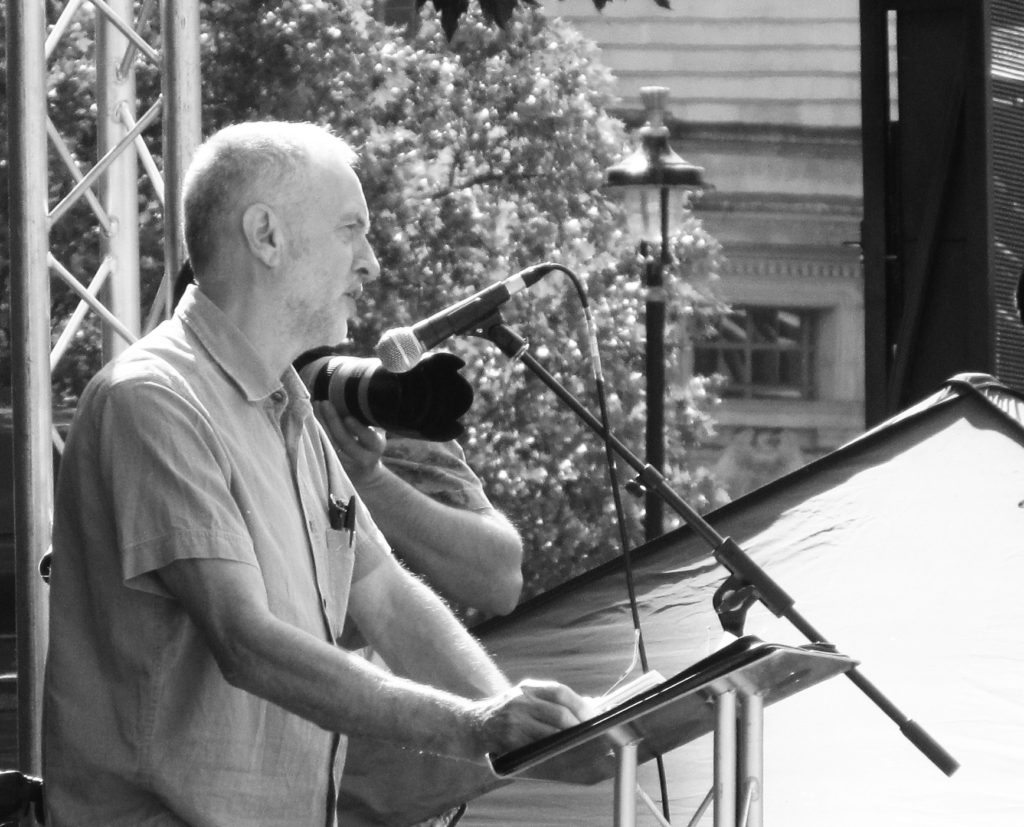 As the Labour leadership battle comes to its inevitable conclusion this week, Owen Smith supporters in the media have been less than dignified in their response to almost certain defeat. One Guardian columnist has launched a foul-mouthed Facebook rant in which he ‘jokes’ about having Labour leader Jeremy Corbyn assassinated in order to replace him with someone more amenable.

Nicholas Lezard is an everyman of the middle-class, liberal media. A literary critic with a weekly column in The Guardian, and known to frequent the pages of The Independent and New Statesman routinely.

So how does a literary critic end up calling for a political assassination?

It all started with a Facebook post by novelist Anthony McGowan, wrestling with how to place his vote in the leadership election, but committed to supporting either candidate in victory. 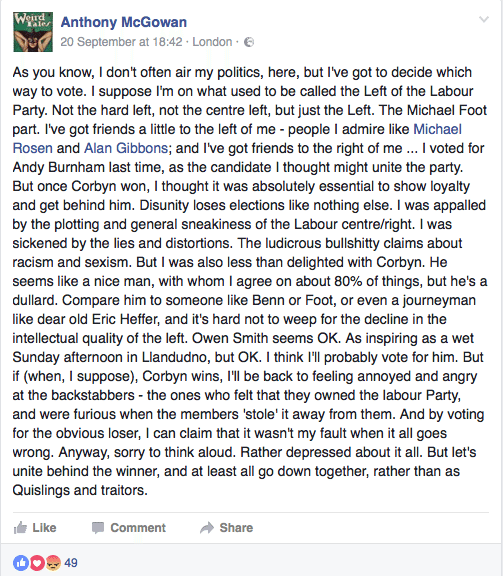 While many replies are equally agonised, or simply a friendly acknowledgement of McGowan’s openness, Lezard had other ideas. 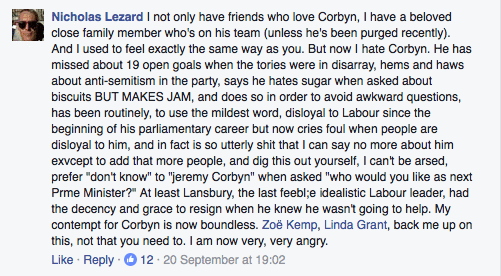 Is it all about Israel?

The Zoe Kemp that Lezard calls in for backup, is a member of the Jewish Labour Movement (JLM) – a pro-Israel organisation which has spent months attempting to smear Corbyn and his supporters as the greatest source of antisemitism in Britain. Kemp even makes the leaderboard for JLM’s ‘most earned social capital’, so evangelical is she for the cause on social media.

Kemp and the JLM’s disdain for Corbyn has far more to do with the Labour leader’s refusal to acknowledge the right of Israel to occupy Palestinian lands and brutalise its people. The JLM has faced strong criticism from the Jewish community for deliberately conflating Judaism and Israel, Jewishness and Zionism, and anti-Zionism and antisemitism. As one Jewish Socialist Group statement reads:

Accusations of antisemitism are currently being weaponised to attack the Jeremy Corbyn-led Labour party with claims that Labour has a “problem” of antisemitism. This is despite Corbyn’s longstanding record of actively opposing fascism and all forms of racism, and being a firm a supporter of the rights of refugees and of human rights globally.

Lezard and Kemp then roll into their own anti-Corbyn rant, which leads to this ‘joke’, only months after the very real assassination of Labour MP Jo Cox:

Then things get really weird. 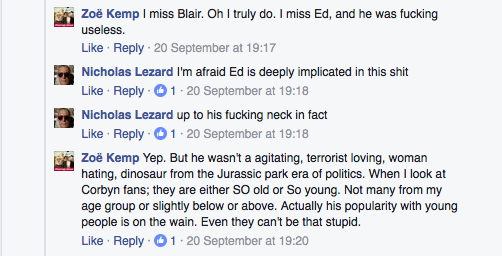 At this point, McGowan interjects. It’s important to note McGowan doesn’t have much time for Corbyn himself, but he does have a basic respect for truth.

But without any pause for reflection, the group moves on dismissing Shadow Secretary of Health Diane Abbott as nothing more than an “ex shag” of Jeremy Corbyn, and launching a baseless attack on pro-Corbyn veteran journalist and economics correspondent Paul Mason: 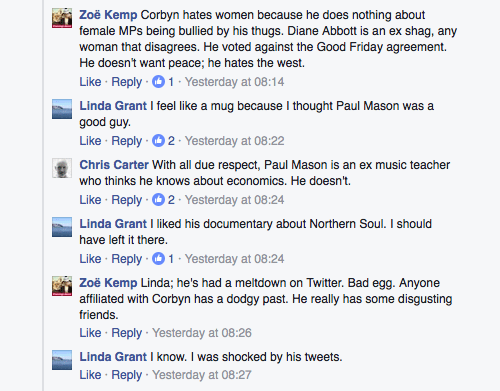 The posts serve to point to the kinds of conversations that some wealthy or middle-class intellectuals are having about Jeremy Corbyn and his supporters. They are crude, they threaten violence, and they are abusive. They are also simultaneously claiming victimhood.

In light of their demands for Jeremy Corbyn to be responsible for every tweet and Facebook post issued by anyone on the left, will The Guardian now take full responsibility for the ramblings of Nicholas Lezard? Should Lezard lose his column for posting a death threat on social media about a UK politician?

You might feel that would be an over-reaction, and it probably would be. But that is the exact standard being applied by the anti-Corbyn brigade. As an example, a University of Bristol student was investigated by the police for telling her Labour MP, Thangam Debbonaire, to ‘get in the sea’ for her role in the Labour coup. Debbonaire claimed that the colloquial phrase (the equivalent of ‘to hell with you’, which has an entire social media movement attached to it) was a literal ‘threat to kill’. She demanded local police and Bristol University take action against the student.

This is the equivalent of being told to ‘go to hell’ and then alleging incitement of religious hatred.

Either Debbonaire, the MPs, and the media outlets who called this as a bona fide death threat are so out of touch that they don’t even know the phrase ‘get in the sea’, or they are willfully misrepresenting this, and vilifying a student, in an entirely cynical smear campaign. Either way, it doesn’t reflect well on them.

All of them would do well to read the most sensible contribution produced in the whole thread, despite McGowan’s notable efforts to get the conversation back on track. It came from his peer in literature, Michael Rosen. Tagged in the original post, Rosen set out his views without the hyperbole quotient employed by Lezard, Kemp and friends. 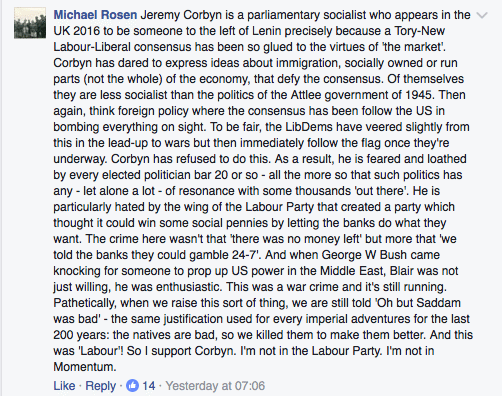 All the smears, false accusations and increasing hysteria from the Smith camp and its media colleagues were about one very simple thing: distracting people from the compelling common sense at the core of Corbyn’s movement – laid out by Rosen above. Britain, and the world, deserves better than this.