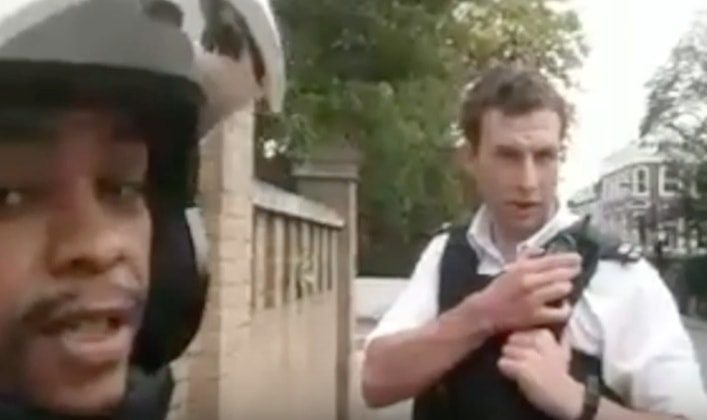 Video footage has emerged of the police officer who smashed up a man’s car over mistaken identity being involved in another aggressive stop just weeks earlier.

Two weeks prior to the car-smashing incident, which has received national coverage, PC Savage – yes, this appears to be his name, and no, you couldn’t make this up – was involved in stopping 24-year-old Kyle Adair-Whyte while he was pushing his moped along the road.

Adair-Whyte has been interviewed by The 4Front Media about his experiences:

He grabbed my wrist straight away, told me to stop. I didn’t actually hear him straight away. He told me to stop and then proceeded to take the keys out of my bike without saying ‘I’m taking the keys’. He had them in his hand and I took them back off him, saying ‘Why are you trying to take my keys?’ And he just said ‘Stop there. Stop there.’

And then he was just grabbing me and holding on to me and I stopped. I was simply saying to him: ‘you know, it’s my bike. How can it not be my bike if I’ve got the keys?’ And I’ve given him the registration number and told him my first name.

He proceeded to handcuff me, detain me, call back up, and humiliate me and embarrass me on the road. And I hadn’t actually done anything wrong. I hadn’t done anything suspicious. All I was doing was pushing my bike because it didn’t start.

One of the things Adair-Whyte is clear on is the impact this type of policing has on his mental health. He states:

I just get ill. It just stresses me out. I can’t think straight. I lose all appetite and stuff.

It makes me feel really bad about myself because I am trying, I am working. I’m doing progressive things and I’m helping young people. I’m helping myself, helping other people. And to have to stand on the side of the road while five officers take the piss out of me just makes me feel ‘what’s the point, because I’m always going to get pulled over and embarrassed on the side of the road anytime they hear my name?’

The effect of this type of policing on mental health is often ignored. Videos go viral on social media showing the violence, brutality and harassment meted out to people. But by their nature, these videos can’t examine the impact. They don’t show how you feel when you’re alone afterwards, when you’re dealing with yet another piece of harassment after being targeted again because the police know who you are or they don’t like the colour of your skin.

I know all of this first hand from what has happened to me as an activist – being constantly harassed by the same police officers time and time again, arbitrary stop and searches, assaults, wrongful arrests, unjustified strip searches. The list is endless, and it wears you down both physically and mentally. The police followed me into my dreams – hot sweaty nightmares of being followed and chased.

I’ve had two breakdowns as a result of my experiences with the police. But I am lucky. Incredibly lucky. These things happened to me because of what I engaged in. They didn’t happen to me randomly where I live just because the colour of my skin made the police believe I was a criminal.

But it does give me empathy. I know only too well what the police are capable of. And while there are many who have been seriously injured or even killed in police custody, there are huge numbers who have to deal with the emotional impact of being continuously and consistently harassed. And it’s time we started measuring and documenting the mental health impact of this type of policing both on individuals and on communities.

Adair-Whyte clearly believes that racism fuelled the way he was treated. He says:

He has the following advice for PC Savage:

He said to me he’s not racist. He hasn’t got an ego. He hasn’t got prejudices. And I said to him: ‘well you didn’t learn anything in the academy, because everyone has some form of natural prejudice because of how they grow up and the experience that they have.’ And he just refused to even accept that and said ‘no, racism ended ages ago’.

If I saw PC Savage again and he was being sensible and not aggressive, I would say to him: ‘remember you swore an oath as a constable to uphold the law, not to just go round accusing people of being criminals and not… harassing and assaulting people – because that’s criminal in itself.’

He didn’t tell me under what law he was stopping and searching me. He didn’t tell me anything. All he did was embarrass me on the side of the road. Think twice because you never know what kind of effects your actions are going to have on people. And the community as well.

This type of policing has to stop. It is shameful that people are being harassed by the police to the point where they feel mentally unwell. But this isn’t just about a few rotten apples. The police force has been repeatedly shown to be institutionally racist, and there needs to be radical change so that all communities feel safe on the streets from the people who are supposedly paid to protect them.