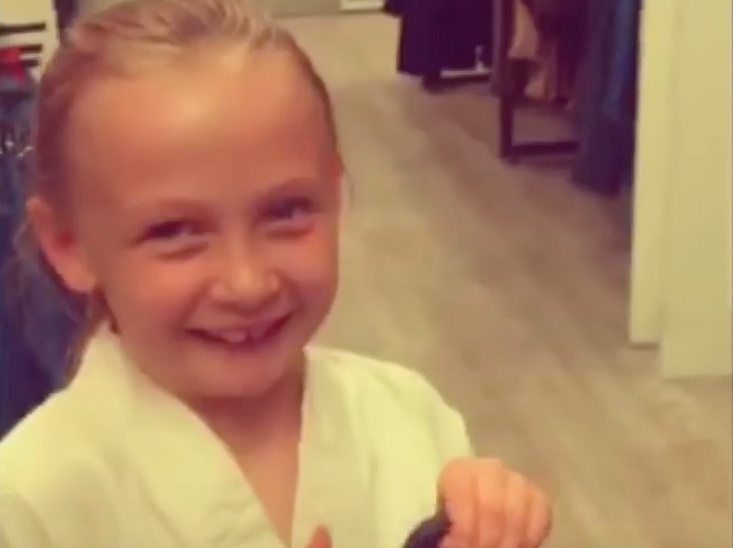 An eight-year-old girl has taken Tesco to task over the gender messages it’s sending out to children with its clothing ranges. And, in a week where a recruitment company has been slated by the Equality and Human Rights Commission (EHRC) for specifying what bra size a potential employee should have, it is a much-needed message.

The girl, Daisy, is filmed being asked what she thinks of the clothes on sale.

She is asked what she thinks about this:

She continued her commentary:

I think that’s wrong because why should boys and girls’ clothes even be separated? Because we’re just as good as each other.

Daisy then examines the meanings being promoted by the different t-shirts:

‘Think outside the box’. What does this mean? It means go on your adventures, let nothing stop you, go for your own dreams. And ‘Hey’, what is that even supposed to mean? …I don’t find that inspiring. What part of ‘Hey’ is great? I don’t get it.

With an infectious, cheeky smile, Daisy then takes part in a brilliant bit of direct action, moving some of the ‘boys’ shirts to the ‘girl’s’ section:

The sexism unmasked by an eight-year-old is echoed in a job advert put out by Matching Models, which claims to be “an international temp agency for beautiful and talented people”.

The company’s advert, for a personal assistant, states it is looking for someone with:

The EHRC condemned the advert as “appalling, unlawful and demeaning to women”.

The agency’s founder, Nathalie Jansen, attempted to defend the advert:

The client who wants the specific cup size is an older gentleman – he has a specific outfit he designed with Christian Dior. He wants a “Jackie O” look. And he wants a lady with a smaller cup size to fit into the outfit.

Yes, in 2016, a recruitment agency thinks it’s acceptable to pander to the fantasies of “an older gentleman”. The response makes the company look like an escort agency rather than a modelling one.

But disturbingly, Matching Models has a long list of famous clients, including Coca-Cola, Heineken, and Cartier. The fact that these companies all use an agency which displays such an overtly discriminatory and demeaning attitude towards women is appalling. But equally, it speaks volumes about the messages these influential companies are prepared to present to the world.

Sexism is alive and kicking, and it’s evident everywhere we look – from cases such as the receptionist who was sent home for not wearing heels, to the news that the gender pay gap is rising in the civil service. It is reflected in our everyday interactions on social media, where misogyny is rife.

Women cannot comment about sexism in public without being fearful of being hounded by thousands of hurtful comments. Writing about the abuse she received after appearing on BBC Question Time, Professor Mary Beard said:

It would be quite enough to put many women off appearing in public, contributing to political debate.

But Daisy is right to be pointing at the messages Tesco (and pretty much every major retailer) is pushing on children and parents. These attitudes start and are learned in childhood, as is shown in this Facebook post comparing boys and girls’ magazines: 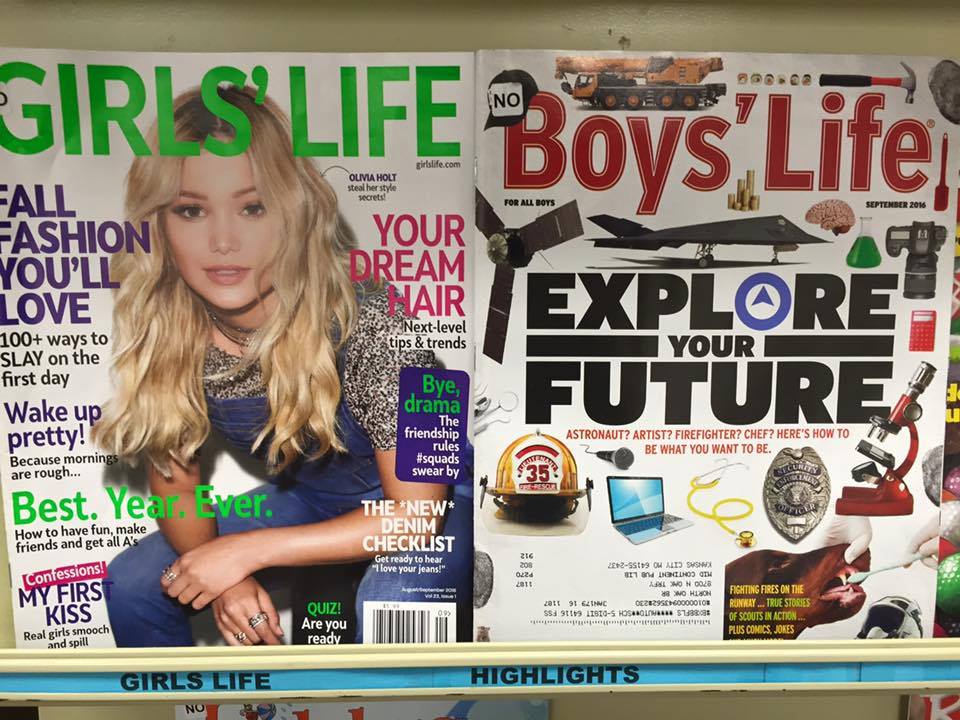 Girls are being told about “fashion you’ll love”, “dream hair” and “wake up pretty”, while boys can “explore your future” and “be what you want to be”.

If we are serious about tackling sexism, we have to start looking at the messages we are giving our children, and we need to be teaching them ways to boycott and deconstruct what they are bombarded with on a daily basis.

Should we fail to do this, it’s likely that we’ll still be having this same conversation in 2066.

– Take a leaf out of Daisy’s book, and the next time you see gender-based clothes or toys, mix them up.