Free speech could be outlawed, but the media turns the story into an anti-Corbyn smear campaign - Canary

Free speech could be censored in Britain, with a report by an influential parliamentary committee calling for the word ‘Zionist’ to be outlawed when used in an “accusatory context”. But instead of focusing coverage on the human right to free speech, the mainstream media has made it all about Labour leader Jeremy Corbyn.

to suppress freedom of expression.

Hassan worries that the report could suppress criticism of the State of Israel. Coined in the late 19th century, Zionism is generally the belief that Jewish people have the religious right to establish a Jewish state in the ‘Holy Land’ or ‘Israel’, roughly corresponding to Palestine.

This map shines a light on what that has meant in practice: 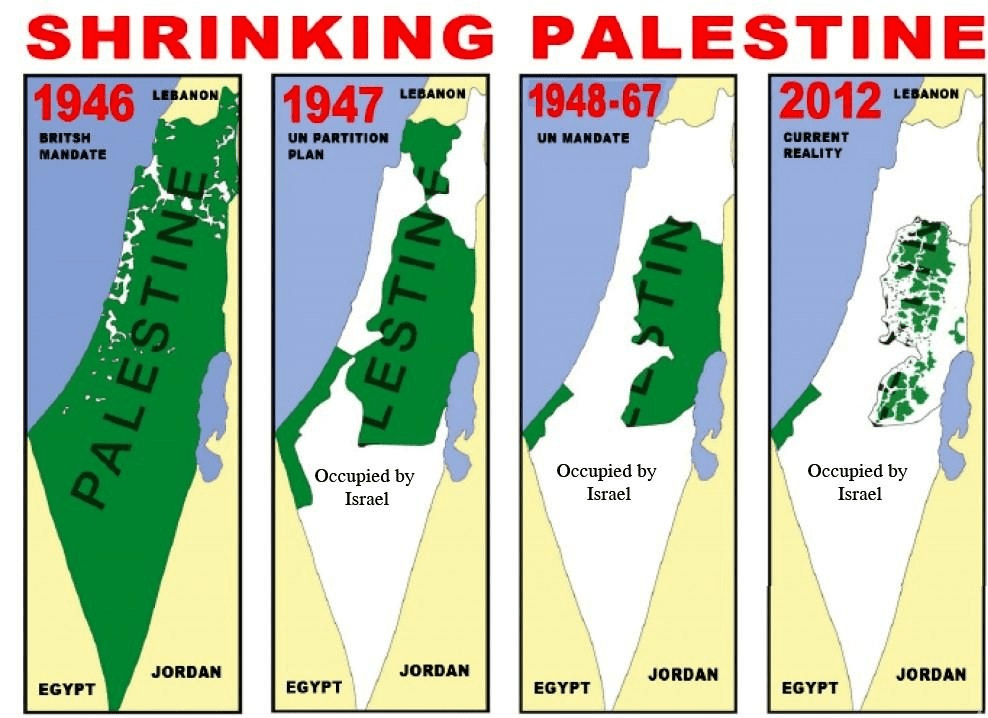 Palestine has been taken mostly by force and without the consent of the long-term inhabitants. Today, these people live under Israeli state-sanctioned occupation. To understand why people may want to criticise the actions of people committed to Zionism, here are some facts about the occupation:

– Israeli authorities have maintained their air, land and sea blockade of Gaza, effectively imposing collective punishment on all its 1.8 million inhabitants.

– They control Palestinian imports and exports.

– They have allowed the building of illegal Jewish-only settlements in Palestinian territories.

– They routinely torture and kill Palestinian children in prison.

For Jewish people, supporting the ideology of Zionism may not mean backing Israeli government policies. A City University report in 2015 found that, among British Jews:

opinions that are highly critical of Israel’s conduct and policies may often co-exist with clear support for its legitimacy and survival.

But Zionism itself, in the sense of establishing a Jewish state in the long-term home of Arab people, could be open to criticism irrespective of the actions of the State of Israel itself.

The line between Zionism and Israeli expansionism is also blurred. The father of political Zionism, Theodor Herzl, established the World Zionist Organisation (WZO). Today, the WZO has received millions of dollars in order to build Jewish-only settlements in the occupied West Bank.

Whether saying ‘Zionist’ is racist or not is irrelevant

Philosopher Slavoj Žižek criticises political correctness because it polishes society through authoritarian social pressures but does nothing to tackle the root cause of bigotry. He doesn’t defend bigots. He just questions the effectiveness of curtailing freedom of speech. For Žižek, banning words just pushes racist ideology under the surface where it can bubble away.

The parliamentary report calls for ‘Zionist’ to be outlawed if used in an “accusatory context”. Jonathan Rosenhead, a London School of Economics professor and activist with the group Free Speech on Israel, said that:

Zionism has been the cause of gross injustice to the Palestinians, so in that sense, every usage of the word Zionist is accusatory.

But even if the word ‘Zionist’ is used in a racist way by some people, banning the word won’t solve racist division, argues Žižek.

The parliamentary report focuses disproportionately on the Labour Party, despite acknowledging the following:

But the report went ahead and focused largely on Labour anyway. The lack of evidence supporting this decision was then disregarded by the mainstream media, which focused on attacking Corbyn as well.

Meanwhile, the report calls for diminishing free speech by outlawing the term ‘Zionist’.

Ultimately, free speech should be defended. Studies continually show a strong pro-Israel bias among Western media contributing to a general lack of knowledge about the conflict. Striving for mainstream debate to be properly informed is the route to improving discourse, not airbrushing out words.