Winter is hotting up for the Tories, as strike action by these courageous workers is announced - Canary 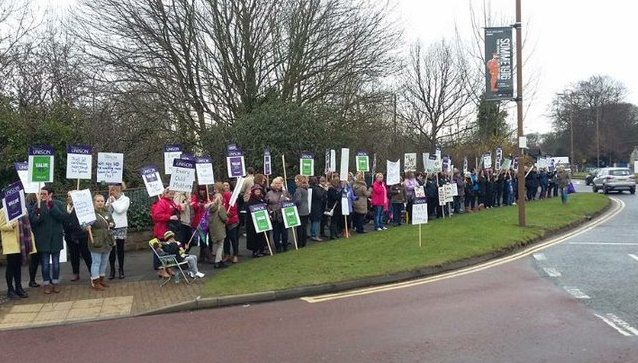 The Conservative government could well be facing its own ‘winter of discontent’, as yet another group of workers votes to take strike action. Durham teaching assistants, represented by Unison, voted by 93% to take industrial action over a proposed pay cut, Durham Unison announced on Wednesday 19 October. And it could see up to 2,700 workers walk out.

As The Canary previously reported, around 2,700 teaching assistants from Durham are facing the sack. The money-saving plan put forward by the local authority will see the staff re-employed on new contracts, meaning a 21% pay cut for many of them.

In May, Durham County Council voted to change teaching assistants’ contracts, so that pay calculations only include term-time work. Currently, teaching assistants earn between £14-18,500. But the new contract would see many lose up to £5,000, with some actually having to work more hours. The council claims that it brings teaching assistants’ pay in line with other council workers, and estimates that it will save schools around £3m from their budgets.

We greatly value the work undertaken by teaching assistants which is why we have tried incredibly hard to resolve this situation and reach an agreement with them. We have carried out two consultations and revised and doubled our compensation offer regarding the move to term-time working and delayed the implementation of these changes to April 2017. We have talked in detail with the conciliation service, ACAS, and removed the dismiss and re-engage clause if the teaching assistants will accept this last and final offer.

But the teaching assistants disagree. They say that their current salaries are for term-time work, but are merely paid over 12 months. Furthermore, they reject the idea of working more hours to earn more money, as many can’t commit to this. And they argue that this amounts to a cost-saving exercise, but one that will hit already low-paid families the hardest.

Fighting for schools and children

A spokesperson for the Durham teaching assistants told The Canary:

Director Ken Loach, whose film I, Daniel Blake comes out on 21 October, has also weighed into the argument. Criticising The Guardian for not reporting sooner on the Durham teaching assistants’ battle, he added:

They are saying, we are not putting up with having our wages cut and being put out of work.

All talks in the dispute between the teaching assistants and Durham County Council have failed. The Labour-controlled authority has issued formal notice to the staff that they will be sacked and re-employed on new contracts. And Wednesday’s ballot result was not the only one taking place; the result from the Association of Teachers and Lecturers ballot is due on Friday 21 October.

Essentially, the council is forcing the teaching assistants’ hand. Either they accept the new terms and conditions of their employment, or they face the sack. What maybe sticks in the throat, however, is that a Labour-run local authority is imposing these measures. But, it will be the Tory government at the sharp end of any industrial action. And with strikes on the railways, in newsrooms, in local councils and now in education, a winter of Tory discontent may well be upon us.

– Sign the petitions in support of the teaching assistants.

– Donate to support their action.