While media outlets focus on the Mosul Offensive, Turkey and Syria set their sights on Kurds - The Canary 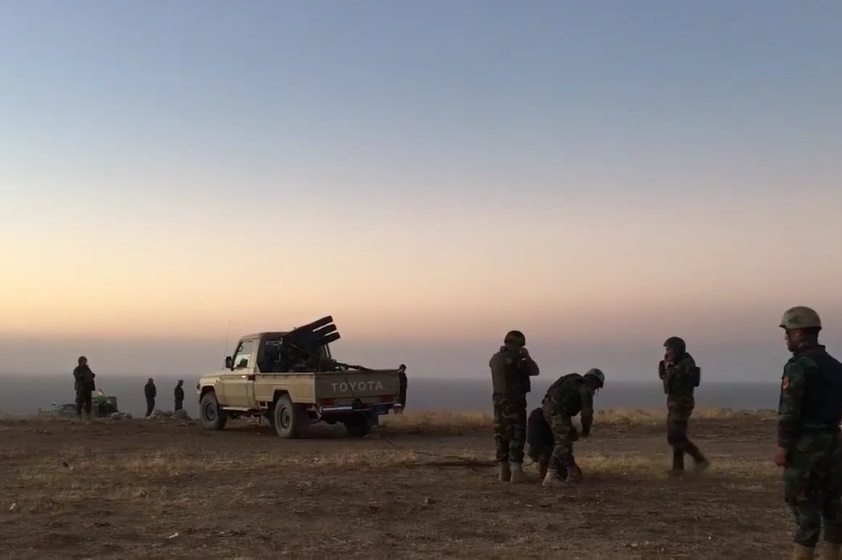 International media attention is currently focused on the offensive launched against the Daesh (Isis/Isil) stronghold of Mosul in Iraq; and on the looming humanitarian disaster there. Turkey and Syria, meanwhile, appear to have their sights set on Kurdish communities, which have been some of the most effective opponents of Daesh in recent years.

As the humanitarian disaster in Syria continues, the media will also be issuing daily reports on the Mosul Offensive in coming days and weeks. The Iraqi city’s liberation would be a major blow to Daesh, but would also offer spoils – like access to vast oil fields – to the victors. This explains in part why so many different groups want to participate in the coalition-led attack.

The Iraqi army and the Peshmerga – the official army of the Western-backed Kurdistan Regional Government (KRG) – make up the bulk of the ground forces. There is also air and special forces support from Britain (which is providing ammunition to the Peshmerga), and from the US. But there are other forces, including Turkey and Iraq’s Yazidi communities, which also want a piece of the pie – albeit for different reasons.

One legitimate claim to involvement in the offensive on Mosul is that of Yazidi forces – such as the YBŞ and YJŞ (male and female militias, respectively) – which are around 1,500 members strong. Daesh launched a massive offensive against Yazidi communities in August 2014, massacring thousands around the town of Shengal (or Sinjar). It also captured 7,000 Yazidi women, taking them as sex slaves. Tens of thousands of Yazidis have since fled Iraq.

In a joint statement, the YBŞ/YJŞ declared:

…we have been fighting against ISIS effectively for more than two years. Shengal is an important residential area in Mosul province, and our forces are the main units that defend it. Therefore, the Mosul operation and the governance of the city after its liberation are of utmost importance to us.

Turkey, meanwhile, also insists on its participation in the Mosul Offensive, presumably to ensure its role in any division of the spoils. Ankara allegedly sent 1,200 reinforcements to Bashiqa, in northern Iraq, without the approval of the Iraqi government. It also wants to deploy around 500 of the remaining troops there in the attack on Mosul.

Turkey has now agreed with coalition forces that its air force will form part of the offensive on Mosul.

The current Turkish regime has come under increased scrutiny in recent months and years over its alleged support for Daesh in Syria. With the group’s losses in northern Syria in the last year, Ankara has most recently focused on making cross-border territorial gains itself. And there are suggestions that the same might happen in Iraq if the NATO ally doesn’t get its way. Turkish President Recep Tayyip Erdoğan stated:

Erdoğan is also concerned that the Kurdish-led Peshmerga will consolidate its power in the region after taking Mosul.

But the Turkish leader may have his own expansionist agenda. We can see this most vividly in a map apparently published by pro-government newspaper Dirilis Postasi, showing what an expanded Turkey may look like if the country’s ruling AKP party has its way. This shows Turkey in charge of largely Kurdish areas in the north of both Syria and Iraq.

A federal solution in Syria?

Syria’s President Bashar al-Assad, meanwhile, has reiterated his position on Kurdish-led propositions of federalism – which would give local areas in Syria more autonomy. He has made it clear that he will not tolerate a the continued existence of Rojava – an autonomous and largely Kurdish region in northern Syria which is currently developing a multicultural, feminist, and co-operative system of government.

In this respect, Syria and Turkey are in agreement; an agreement they perhaps outlined during secret talks previously reported on at The Canary.

But a spokesperson for the Rojava-led Syrian Democratic Forces (SDF) has made it clear that there will be resistance against attacks from both Daesh and state forces. Stressing that the SDF will deal appropriately with any Daesh fighters fleeing west from Mosul into Syria, the spokesperson said:

We fight for a democratic and federal Syria. There exist neither conditions nor possibilities for a return to the system before the revolution process. Besides, nobody would accept that. More than two million people have been killed or injured, millions of others have been displaced and the infrastructure of the country has suffered a huge destruction. There can be no return after all these. Nobody will forget their pains and wounds. In short, [a] federal system is the most appropriate model for a resolution after all these [problems] have been experienced. [This] system means not division but on the contrary [the] unity of Syria.

As the battle for Mosul takes place in the coming weeks, it’s important not to take our eyes off the actions of both the Turkish and Syrian governments.