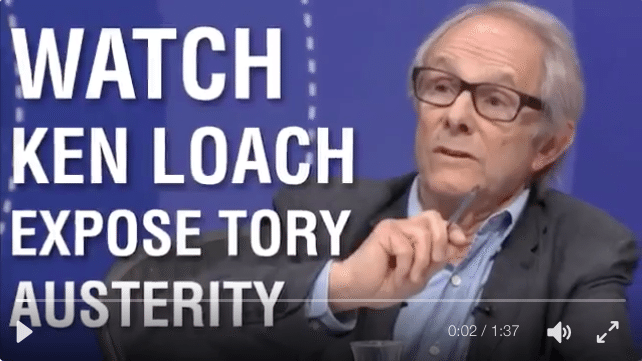 Film director Ken Loach appeared on BBC Question Time this week. And in just 96 seconds, he tore apart the failed political and economic decisions which have created the appalling living conditions captured in his latest film: I, Daniel Blake.

Loach was asked for his view on Prime Minister Theresa May’s sweetheart deal with Japanese car manufacturer Nissan, likely the first in a long line of companies queuing up to profit from Brexit. Loach said:

…there’s clearly a subsidy promised; assurances are nothing without money on the table. If there’s an assurance, they’ll have some money attached.

I’ll tell you someone who it is good for. There’s one CEO working for a big multinational company. He earns in 45 minutes what the average worker will earn in a year.

The economy is good for him. It’s not so good for everybody else.

In a Britain where the Trussell Trust network of food banks is delivering over a million food parcels a year to people who otherwise couldn’t afford to eat, where a million people are working on insecure zero hours contracts, and an end to the economic and social policies which drove people to these conditions is nowhere in sight, we need more people like Ken Loach – who are willing and able to defend those who cannot defend themselves.

– See more from Ken Loach at The Canary.