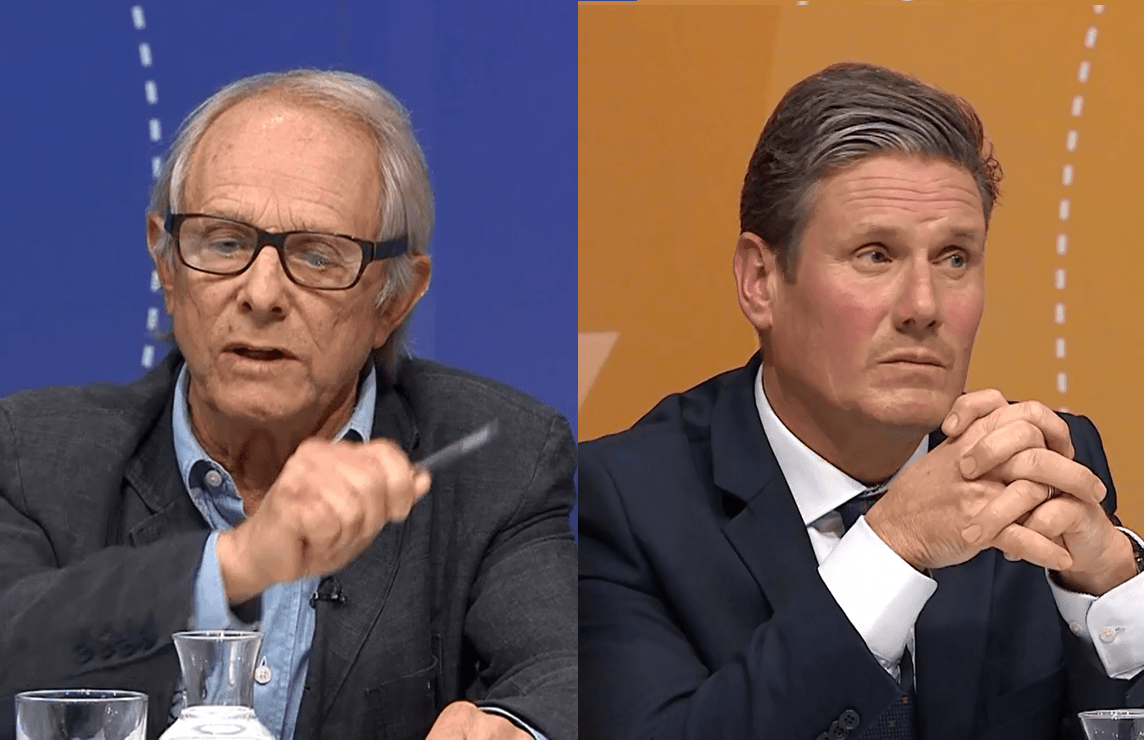 BBC Question Time erupted in cheers and applause as Ken Loach called on his fellow panellist – the Shadow Brexit Secretary – and other Labour MPs to unite behind Jeremy Corbyn.

Shadow Brexit Secretary Keir Starmer was one of the MPs who resigned in an attempt to topple Corbyn in June.

For Loach, Labour’s perceived lack of support in the country stems from a lack of unity. The award-winning director proclaimed:

And I do wish that for once the Labour MPs would follow the wisdom of their leaders Jeremy Corbyn and John McDonnell and stick with what they say. They are good leaders. Follow what they say.

In this case, Loach was speaking of Corbyn and McDonnell’s staunch opposition to Heathrow expansion. By contrast, it is thought a majority of Labour MPs would support a third runway if given a free vote.

An audience member’s passionate question about the dangerous environmental impact of expanding aviation had spurred Loach on:

Also, the small elephant in the room: climate change. We’ve got to stop emissions now. We cannot just carry on living like the planet will last forever, right?

Loach echoed the audience member’s concerns, with a straightforward response:

I think you’re absolutely right. It is inconceivable that we shall meet our climate change targets if we build another runway.

There’s no need to take Loach’s word for that. Alice Larkin, professor of climate science and energy policy at the University of Manchester, has been unequivocal:

Policy measures aimed at increasing capacity and supporting further growth in air travel such as new runways, particularly within richer nations, are at odds with the Paris Agreement.

Loach in line with the experts

Expanding Heathrow, along with other policies that significantly increase fossil fuel use, is at odds with the grave concerns of scientists. Professor Kevin Anderson, deputy director of the Tyndall Centre for Climate Change Research, warned it is:

It’s warnings like these that led Loach to ask on Question Time:

Do people not realise that there will be no planet to leave to their great grandchildren and the people that follow afterwards?

Loach, like Corbyn and McDonnell, sides with expert opinion on the Heathrow debate.

Labour MPs back the Conservatives

Many supporters hoped that after Corbyn received a record-breaking 62% mandate in the second Labour leadership election, the Parliamentary Labour Party (PLP) would get fully behind him. But ignoring the scientific consensus and backing aviation expansion is not the only crucial issue the Labour right is siding with the Conservatives on.

On Wednesday 27 October, 102 Labour MPs abstained on Corbyn’s motion to withdraw support for Saudi Arabia, letting the Conservatives win. This is despite the well-documented war crimes carried out by the Saudi-led coalition against Yemeni civilians using UK-made bombs. The most comprehensive report on the conflict shows that one third of Saudi-led airstrikes have hit civilians.

Seeing the right-wing of the PLP back dangerous Heathrow expansion and the devastating bombing campaign in Yemen, Loach called on MPs to get behind Corbyn. Instead of siding with the fossil fuel and arms industries, these MPs must listen to the film director and unite behind their leader. Removing the Conservatives, saving the planet, and protecting human lives in Yemen all depend on it.

Let’s stand up to the arms industry and its parliamentary PR people. Help put an end to the bombing in Yemen.

– Write to Theresa May to ask why there is so much British support for Saudi war crimes in Yemen. And demand that your MPs take a stand on the issue.

– Act now with the Campaign Against Arms Trade (CAAT).

Let’s side with the planet, not fossil fuel profits:

– Find a local group, and get involved in protesting the aviation industry.