Labour MP Andy Burnham has accused the Conservative government of an “establishment stitch-up” to prevent action being taken against perhaps the worst abuse of the Thatcher government – and the evidence is on his side.

What’s this all about?

On June 18 1984, striking miners picketed the British Steel Corporation coking plant in Orgeave, South Yorkshire, in order to prevent deliveries. More than 5,000 riot police turned up to stop them, by all means necessary. What happened next has been described by Labour MP Tristram Hunt as:

almost medieval in its choreography… at various stages a siege, a battle, a chase, a rout and, finally, a brutal example of legalised state violence.

The Battle of Orgeave took place five years before the Hillsborough disaster. Just as at Hillsborough, the police stand accused of violence and misrepresentation, of turning victims into perpetrators. It is the most infamous showdown between striking miners and the government (in the form of the police). A community fighting to maintain its jobs and traditions was recast as a violent mob.

As Mike Kelly writes for The Chronicle Live:

It saw 95 striking miners, including four from the North East, facing trumped up charges including riot and unlawful assembly.

To get them in the dock, evidence was reportedly fabricated and perjury committed by officers of the law.

Yet because the case was thrown out of court and miners acquitted and not found guilty, some said that technically no miscarriage of justice took place.

So from that day to this no officer involved has been asked to explain their actions – but we think the time has come.

The links to the Hillsborough tragedy are obvious. Both operations were run by South Yorkshire Police. Both saw unethical and corrupt practices carried out to persecute the dead of Hillsborough and the striking miners at Orgreave.

For more, see this documentary:

Today, the majority of the media has come out on the side of the miners. But there was no such solidarity at the time. The “mass manufactured” police statements were accepted as truth, and an entire community (and the miners’ strike itself) was vilified. The Thatcher government, meanwhile, received praise for its willingness to deploy state violence against miners in order to defeat their strike.

This was the front page of The Sun the day after the battle: 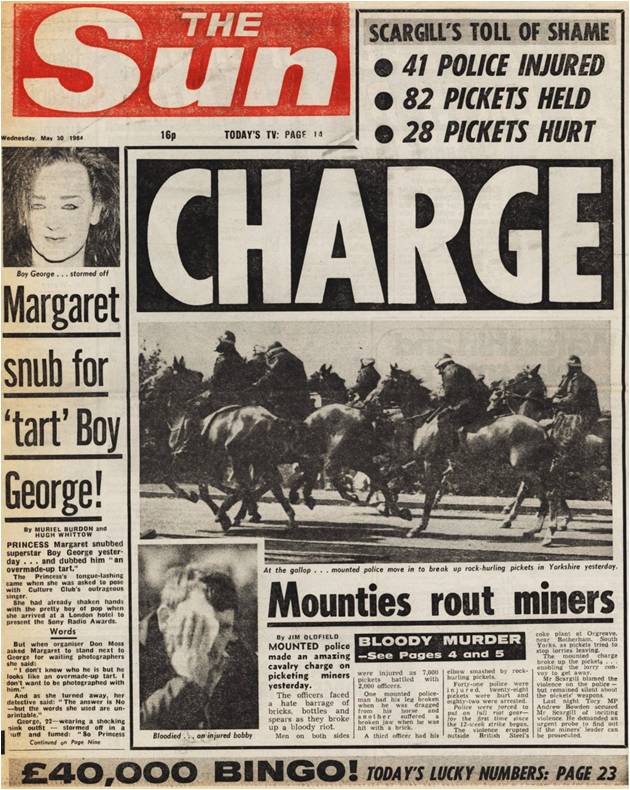 That manipulation and misinformation is still perpetuated today, with modern Conservatives continuing to portray the actions of police as heroic, and those of the workers as thuggish and illegal.

Despite hopes over the recent two-year review that this 32-year denial of justice was coming to an end, the Conservative government announced this week that there will be no inquiry into the tragic events of Orgreave. Labour Shadow Health Secretary and candidate for Mayor of Manchester Andy Burnham responded angrily to Rudd’s statement, saying:

Given that the IPCC found evidence of perjury and perversion of the course of justice, and given that in the last month new evidence has emerged from former police officers who were at Orgreave of orchestrated violence and the mass manufacture of police statements, are we right in concluding the establishment stitch-up that she has just announced today is nothing more than a nakedly political act?

The evidence is certainly on Burnham’s side. Norman Tebbit, Secretary of State for Trade and Industry at the time of the Battle of Orgeave, gave an ecstatic reaction to the news. He dismissed the inquiry as nothing more than “a stick with which to beat the Thatcher government”.

A sublimely poor choice of words, considering it is the Thatcher government and South Yorkshire police that stand accused of literally beating down workers during the course of entirely legal strike action.

But it isn’t just Tebbit who is keen to protect the Conservative Party from the repercussions of a full Orgeave inquiry. The reactions of present-day Conservative MPs to Amber Rudd’s decision played into the same falsehoods created at the time.

If we were to have an inquiry, it might be into the activities of the National Union of Mineworkers!

These people were trying to take down the democratic government of the time and they lost and they need to get over it!

Without an inquiry, the families and victims of the Battle of Orgeave do not know what surveillance was used to set them up, who ordered the police actions of that day, if there were undercover officers playing a role within the community, and what role the Thatcher government played in any of it.

No one will be held to account for a day of horrendous violence and brutality, or the aftermath. No lessons will be learned, no heads will roll, no apologies will be made.

Instead, Conservative MPs like Soubry, Davies and Hollobone will get free rein to perpetuate the myth that this was a battle instigated by thugs, bravely put down by police. If that isn’t an establishment stitch-up, what is?

To keep up the pressure for justice:

– Use this template and write to Amber Rudd about getting justice for the miners present at Orgreave.