While Boris Johnson continues to suck up to Trump, Leanne Wood's response is brilliant - Canary 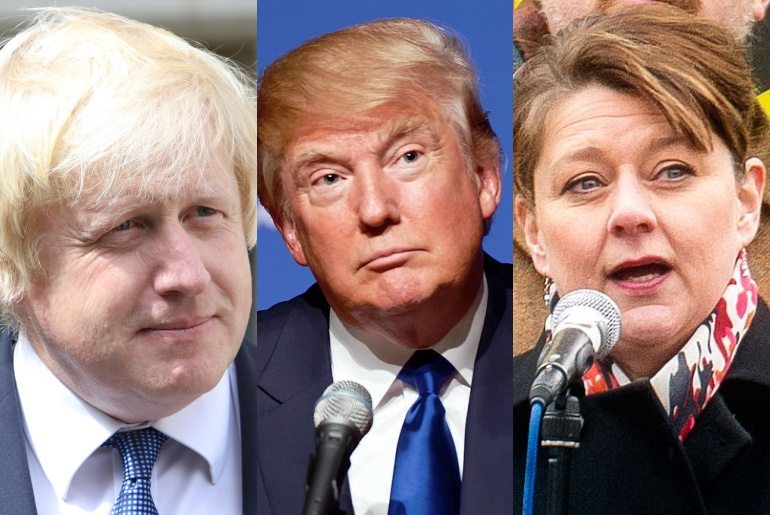 Boris Johnson continues to woo Trump in his efforts to backtrack over earlier, less favourable comments he made about the President-elect. Leanne Wood, meanwhile, has issued a brilliant response to Trump’s election.

Wood, the leader of Plaid Cymru, called for “calm heads and winding down the rhetoric”. But she also nailed the essence of Trump’s victory:

There is now a clear trend in Western democracies of anti-establishment rhetoric being falsely utilised by the wealthy and powerful as a route to power.

Wood acknowledges that Trump’s rhetoric is vile. She’s also clear that the inequality needs to be addressed:

While our values of anti-racism and anti-sexism are not up for negotiation, we must still reach out to those people who are now attracted to right-wing populist parties or causes, because on issues like inequality of wealth, there is a clear case to answer.

And she believes it is parties like Plaid Cymru that can deliver this message:

The reason why Plaid Cymru has gone forward in recent elections is because we have become trusted at a local and community level. There is far more to be done, but in Wales it is Plaid Cymru which holds open and inclusive values whilst still offering an alternative to the Westminster establishment.

Meanwhile, Johnson continues to backtrack from his earlier comments about Trump. During the campaign, he accused Trump of being “out of his mind” and of portraying a “stupefying ignorance that makes him frankly unfit to hold the office of president”.

Now, in addition to “looking forward to working with his administration on global stability and prosperity”, the Foreign Secretary has gone further. He has told European leaders they need to snap out of their “whinge-o-rama” over the result:

I would respectfully say to my beloved European friends and colleagues that it’s time that we snapped out of the general doom and gloom about the result of this election and collective ‘whinge-o-rama’ that seems to be going on in some places.

Johnson is a seasoned backtracker. After all, he wrote an unpublished column in favour of the EU two days before he backed Brexit. There was, he apparently felt, political mileage in leading the Leave campaign.

But Wood is right to pinpoint the way a part of the elite has managed to hijack the anti-establishment agenda. Whether this is Trump, UKIP’s Nigel Farage, or Johnson himself, who couldn’t be more deeply embedded in the rich elite if he tried.

People are rightly sick of a world of elites. They’re fed up with seeing the wealth of a few increasing while everyone else’s dwindles. Wealth inequality is on the rise in the US and the UK. And now, the rest of us are being made to suffer while yet another wealthy elite uses inequality to further their own careers. The real arguments over austerity and tax avoidance need to be made, instead of the false narratives that scapegoat immigrants and other minorities.

As The Canary’s Editor-in-Chief, Kerry-Anne Mendoza wrote earlier this week:

So, no. I’m not going to ‘cheer up’ today. I’m going to express my sadness and solidarity with the people who will suffer under President Trump. Then, I’m going to do EVERYTHING in my power to stop the growth of this man’s ideology, and to move humanity forward to a better world – where we base our votes and our daily actions on love, peace, sustainability and community.

And if we fail to do this, the world will only get uglier.