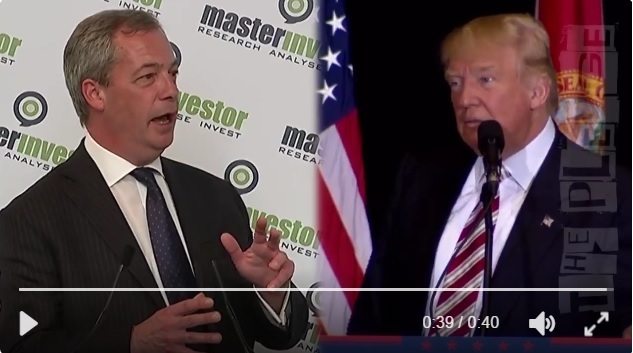 A video mash-up capturing the bromance of Nigel Farage and Donald Trump is doing the rounds on the internet, and leaving anyone outside the far-right with a little sick in their mouth.

A love song for the far-right

Far-right trollumnist and former UKIP leadership wannabe Raheem Kassam took to Twitter to declare his love for the video, which layers together clips of Farage and Trump to make it appear they are singing the classic ‘Just the two of us’ to each other.

The video parodies the emerging friendship between Britain’s far-right and the emerging neo-Nazi movement in the US, which has attempted to rebrand itself as the ‘alt-right’. While such groups have been filmed ‘Sieg Heiling’ the coming of President Trump, the President-elect has been lobbying Theresa May to give Farage the role of UK ambassador to the US.

The bromance of trust fund tycoons

Trump and Farage have much in common. They are both trust fund tycoons spinning a fake anti-establishment mantra to win votes.

Privately-educated Donald Trump inherited his father’s fortune and connections. He manipulated debt and bankruptcy to enrich himself while shafting small business suppliers and decimating entire communities. He then used that wealth to bankroll a presidential campaign built on lies and prejudice.

Nigel Farage is built from the same stuff.

Farage is a millionaire banker, from millionaire banking lineage. His father, Guy Oscar Justus Farage, was a stockbroker. Nigel didn’t work his way up from the bottom. He was educated at the £10,000-a-term private school Dulwich College. On leaving college, he used his father’s contacts to become a commodities trader in the City. He went on to become a career politician, earning an £84,000-a-year salary plus expenses (which have added up into the millions).

No wonder the two get along so very well.

Just this week, it was revealed that the cost of Brexit to the UK economy is estimated to be an additional £122bn on the national debt. But Nigel Farage was celebrating, at a party thrown in his honour at The Ritz Hotel. The privately-educated, millionaire former stockbroker and career politician flew in on his donor Arron Banks’ private jet to quaff champagne in London’s most exclusive hotel, at a party bank-rolled by billionaire media barons the Barclay Brothers – and called it a victory over the “career, professional political class”.

– See more on Nigel Farage, and read more on Donald Trump at The Canary Global.