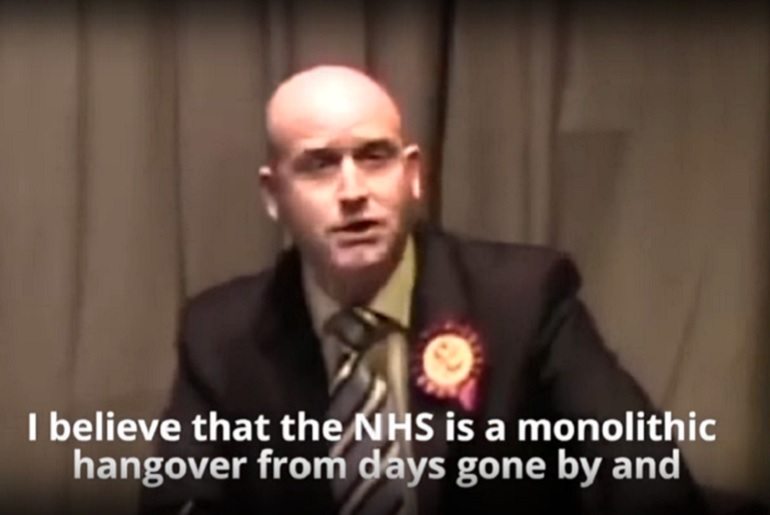 The Labour Party has just hit out against newly elected UKIP leader Paul Nuttall with a video that is going viral. The 40-second snippet, posted on the party’s Facebook page on 28 November, has already racked up over 300,000 views.

The clip seeks to publicly shame Nuttall and present him as a threat to the UK’s national health service. As the video highlights, Nuttall supports the privatisation of the NHS. A post on his website, since deleted, said:

I would like to congratulate the coalition government for bringing a whiff of privatisation into the beleaguered National Health Service. I would argue that the very existence of the NHS stifles competition, and as competition drives quality and choice, innovation and improvements are restricted.

For any UKIP supporters still thinking about Nigel Farage’s ‘£350m for the NHS’ pledge, don’t hold your breath.

Nuttall, an MEP for North West England, won 62.6% of the vote out of a total 15,405 votes cast. He is already making a name for himself as Farage’s successor. In one of his first interviews as the new leader, he said:

My ambition is not insignificant: I want to replace the Labour Party and make UKIP the patriotic voice of working people.

He also stated that Labour under Jeremy Corbyn was more concerned with “dinner party” topics such as climate change and fair trade, rather than the interests of its working class voters.

Nuttall has also previously said that he would seek to make Farage a Lord, as it would be a “fitting tribute to the man who gave us Brexit”.

With Nuttall planning to “replace Labour”, and Labour now hitting back and shaming him, it appears there will be quite a lot of animosity between the two parties in 2017. It is uncertain whether UKIP supporters will continue to support Nuttall given his plans for NHS privatisation. Labour supporters will be even less likely to move to UKIP because of this.

– Read more about UKIP from The Canary.