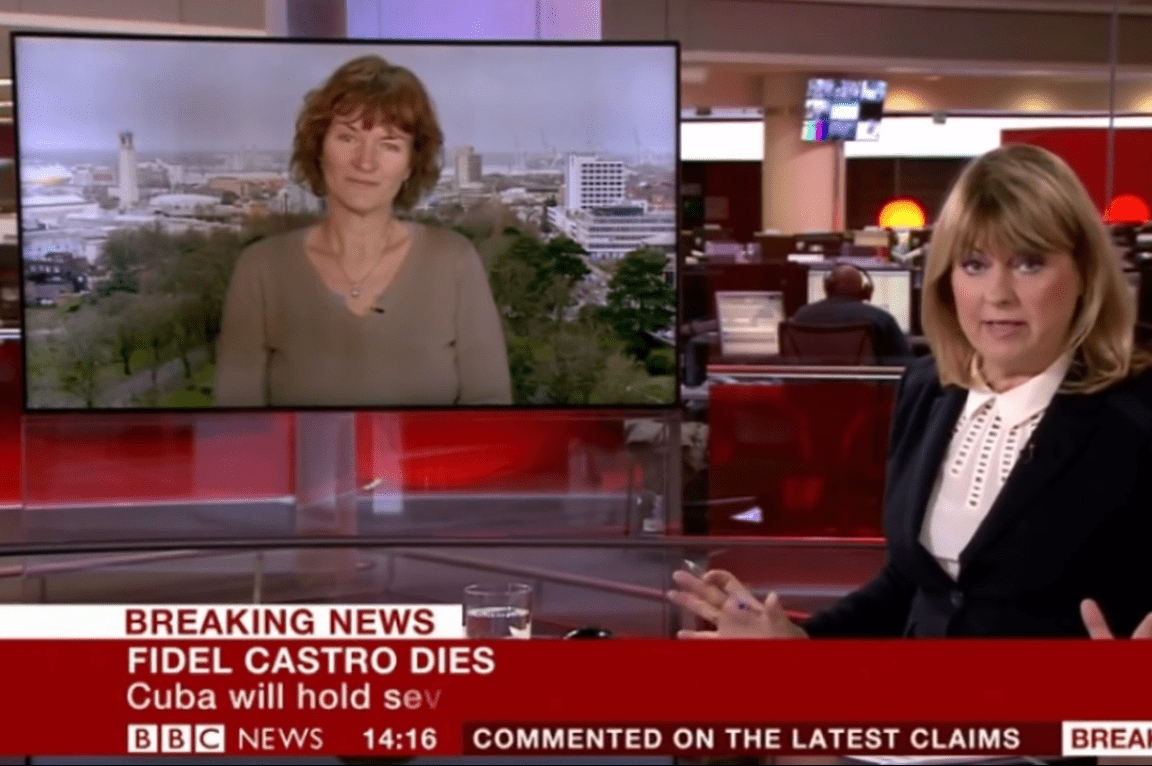 The BBC’s biased coverage of former Cuban leader Fidel Castro has been exposed live on its own news segment. With just one sentence, Dr Denise Baden made the public broadcaster’s double standards appear evident:

if you exposed America to the same lens, I think you’d have a stack of crimes that would overshadow what Fidel Castro’s done.

For Baden, an Associate Professor at the Southampton Business School, it seems the BBC does not apply the same scrutiny to UK allies (like the US) as it does to adversaries (like Cuba).

A remarkable interview from the beginning

The BBC host kicked off the exchange by saying:

He ruled with an iron fist, didn’t he?

Baden immediately challenged the simplistic characterisation of Castro as a tyrant that has been prevalent in much of the Western media:

Well that’s something everyone’s fond of saying, but when I talk to the people who live in Cuba and the Cubans who’ve come to live in the UK, that’s not the story that I get… They’re aware that many of them wouldn’t even be here if it wouldn’t have been for the health advances and the equalisation of resources that he provided.

Cuba has a well-respected healthcare system. Both UNICEF and the WHO have released very favourable statistics on the system. And despite having a small economy and only 11 million residents, Cuba led the international response to the Ebola crisis, dwarfing US/UK efforts. The nation currently has over 50,000 doctors stationed in more than 66 countries.

A context of US hostility

The US put in place a full-scale embargo on Cuba in 1962. In 2014, Cuban officials argued that these sanctions had cost the island $116.8bn.

Diplomatic relations have been improving in recent years. But Washington still spent around $4m in 2015 on efforts to promote regime change in Cuba. And under the leadership of Donald Trump, whose response to Castro’s death was far from diplomatic, the warming of relations seems unlikely to continue.

Baden reflected the reality of economic sanctions when speaking to the BBC:

some [Cubans] blame Fidel Castro for the hardships they went through, but… I think most people blame the [US] embargo.

And in a globalised economy dominated by US banks and multinationals, sanctions can indeed devastate nations like Cuba that assert their political independence.

In response to Baden’s comments, the BBC host repeatedly tried to equate her nuanced answers with an acceptance of human rights abuses. And Castro’s Cuba did have its pros and cons, as summarised by Amnesty International:

Access to public services such as health and education for Cubans were substantially improved by the Cuban revolution and for this, his leadership must be applauded. However, despite these achievements in areas of social policy, Fidel Castro’s forty nine year reign was characterised by a ruthless suppression of freedom of expression.

In 2016, Cuba remains near the bottom of Reporters Without Borders’ press freedom index. And while decades of US hostility are key to understanding the island’s restrictions on freedom of expression, criticising its government on this front is more than fair.

But it’s also important to remember that Cuban citizens benefited under Castro in terms of healthcare and education.

Castro died on 25 November at 90 years old, prompting a global debate on his 49 years in power. And while interviewers should always be challenging and critical, the BBC’s coverage of the former Cuban leader highlighted its bias. While critical of UK adversaries, the broadcaster does not tend to hammer the human rights message home in the same way when it comes to the UK or its allies and client states.

When Margaret Thatcher died in 2013, for example, interviewees on the BBC were not beset with questions about her support for South African apartheid or her close friendship with Chilean dictator Augusto Pinochet. But with Castro – who opposed and fought against both apartheid and colonialism – the BBC felt it had to put his human rights record front and centre.

– Read The Canary‘s previous articles on Cuba and Latin America.

– Support The Canary so we can keep holding the mainstream media to account.