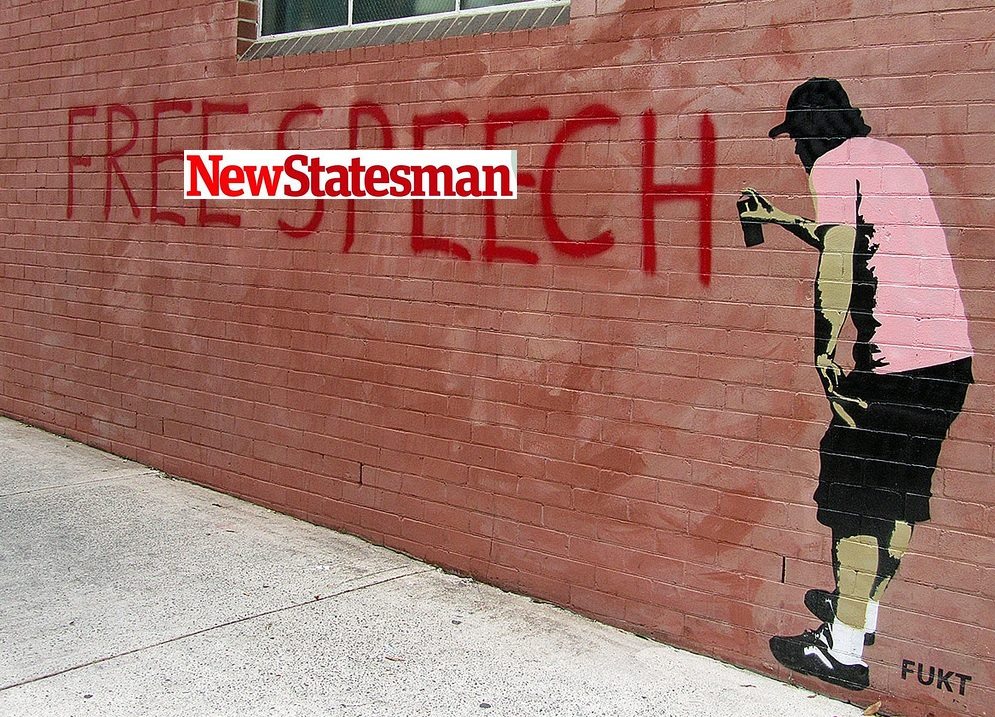 The New Statesman has censored an article it published after the piece received criticism. It published the article on 18 November as part of a two-year partnership with the Palestinian Solidarity Campaign (PSC).

But by 23 November, The New Statesman had removed the piece, titled The Frontline of Israel’s Settlement Regime. And two pro-Israel groups had publicly criticised the news outlet for publishing the article shortly before its removal.

In fact, one of those groups has already claimed credit for the censorship:

The co-founder and Director of the Lajee Cultural Centre, Salah Ajarma, wrote the article. Lajee is a Palestinian cultural centre in Aida refugee camp on the outskirts of Bethlehem. Fans of Glasgow’s Celtic Football Club began a fundraising campaign for the centre in August, which raised £79,000. As the creators of that campaign explained:

For the young people of Aida, the Lajee Centre in the heart of the camp offers hope and an escape from the realities of life under Israeli occupation. Its programme of arts, culture and sporting activities are a lifeline for its impoverished and oppressed people.

Ajarma detailed his perspective on life in the Aida refugee camp, and the history that brought Palestinians to it. He also called on the UK government to take meaningful action to bring about peace in the region and stop Israeli settlements on Palestinian land.

But his depiction did not sit well with UK Media Watch, a group whose remit is to promote “fair and accurate coverage of Israel”. It penned a response to the article in which it questioned Ajarma’s depiction of Israel’s separation wall as illegal, despite the UN deeming it so. It also attempted to provide excuses for the tragic killing of a Palestinian boy by the Israeli military in 2015.

Another website, called ‘Honest Reporting’, condemned the article too. It accused the Aida camp of being a breeding ground for extremists and essentially urged Palestinians to stop whining about Israeli settlements because they get “hundreds of millions of dollars of aid” each year. Aid, coincidentally, that around 80% of Palestinians are dependent on to survive. And aid that is currently under threat.

Ajarma’s article was deleted by The New Statesman within days of these critiques appearing. The PSC was not notified in advance of the removal. And the only explanation given to the PSC from the New Statesman was that the deletion was a result of “reader complaints”.

The Electronic Intifada also contacted the publication for comment. The New Statesman said:

[We] removed the advertorial in question because it conflicts with the New Statesman’s editorial independence. As a publication we are committed to producing analytical and skeptical journalism.

It also removed a further article titled Israel’s Weapon of Mass Construction. The PSC has called for The New Statesman to republish the article, and apologise to its author. It is also urging people to write to the publication to demand action and explanation.

Free speech for some

The PSC says the article’s removal is “a disgraceful attack on freedom of expression”. In particular, the freedom of a Palestinian man to express his views on Israel’s treatment of his people, and on what the international community should do to help.

One of his central points was that “ending trade with settlements” is crucial to beginning the process of peace. While the UK recognises that settlements are illegal, it refuses to end trading with those that are responsible for them. Earlier this year, the UK government even banned councils from adopting policies to stop buying Israeli goods from occupied territories.

It also seems that some politicians in the Labour Party are on the same page as the Tory government. Deputy Leader Tom Watson recently spoke at the Labour Friends of Israel Annual Lunch. And in his speech, he called the Boycott, Sanctions and Divestment (BDS) movement “morally wrong” because it seeks “to demonise and delegitimise the world’s only Jewish state”.

But whether these politicians – or pro-Israeli blogs – disagree with BDS or not, we should not allow them to silence those who believe BDS is necessary. And we certainly shouldn’t censor first-hand experience from Palestinians themselves just because it clashes with another narrative.

It is instructive that this situation has concluded with a censored Palestinian voice and two pro-Israel statements still in place. But as we approach the 50-year anniversary of the Israeli occupation, that dynamic cannot hold.

Maybe that looming commemoration, which will bring the Palestinian struggle centre stage, is exactly why there is so much pressure now to keep them quiet. But shame on The New Statesman for acquiescing.

– You can write to the New Statesman here.

– Learn more about BDS with PSC.