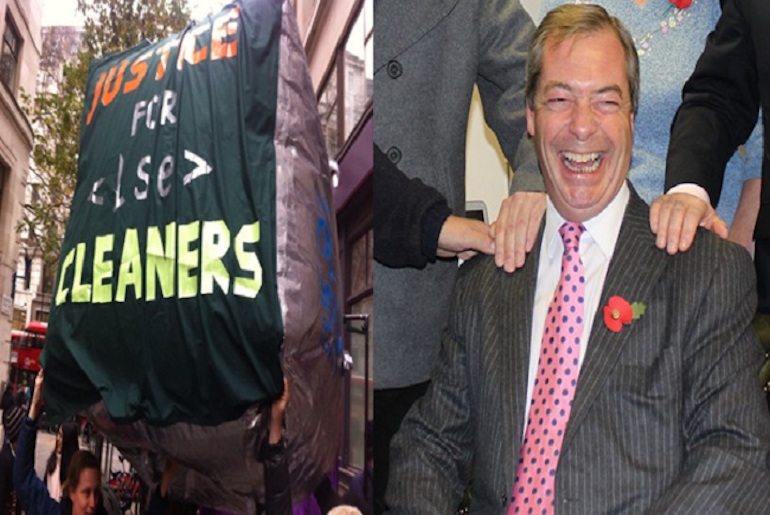 The London School of Economics (LSE) has come under heavy criticism for the treatment of some of its workers. The United Voices of the World (UVW) union says the university’s treatment of its cleaning staff is “divisive” and “socially corrosive”. UVW also says the LSE is treating them like ‘second-class citizens’ compared to regular employees. And the treatment of the cleaners comes from what is supposed to be a left-wing university, founded by the Fabians.

The LSE outsources the contract for cleaning to Noonan Services. The cleaners get £9.40 an hour, even though they work in London, where the recommended Living Wage is £9.75. Also, Noonan only give the cleaners 28 days paid holiday, while regular LSE staff get 41. And the cleaners only get a 1% pension contribution from Noonan, while regular LSE staff receive 13- 16%. Finally, Noonan only give the LSE cleaners Statutory Sick Pay. This means that, if the cleaners are ill, Noonan do not pay them for the first three days. And then, they only get £88.45 a week after this.

At the same time, the LSE cleaners have seen worsening working conditions. UVW has been campaigning for Noonan and LSE to make “the cleaners terms and conditions… equalised with in-house LSE staff of equivalent grade”. It demanded that LSE and Noonan respond to try and “avert a strike” by 2 December.

So far, UVW says neither LSE or Noonan’s responses satisfactorily addressed the cleaners’ concerns and demands. In fact, UVW says “the cleaners considered their responses to be as vacuous as they were disrespectful”. And to raise awareness of LSE and Noonan’s “disrespectful” treatment of the cleaners, UVW held a protest on Friday 2 December outside the university:

In a statement, LSE told The Canary:

Earlier this month LSE, Unison and Noonan, the cleaning contractor, signed a formal partnership to create a forum to discuss and resolve matters relating to the employment terms and conditions of cleaning staff. This agreement provides cleaning staff with the opportunity to use a recognised trade union to officially represent them and to be able to raise concerns and requests with their employer (Noonan).

LSE will be a part of these discussions, but will not play a decision-making role on Noonan terms and conditions. The school will, however, be looking closely at any concerns raised on the conditions for cleaners on campus, as that is directly within our control. As a living wage employer, both LSE and Noonan will be implementing the updated London Living Wage rate of £9.75. Exact timing of the increase will be discussed at the first partnership meeting which will take place in the next fortnight.

We are disappointed at the suggestion of industrial action. This is particularly premature considering the meetings set-up to help resolve cleaners’ concerns have not yet taken place.

But as The Canary previously reported, the unfair treatment of cleaners by outsourcing companies is a national problem.

John Lewis is one such example. It outsources the contract for cleaning to Compass Group. Compass pays over 3,000 of them a mere £7.35 an hour. John Lewis’ regular staff get £8.20. The cleaners get £7.35 even if they work in London, where the recommended Living Wage is £9.75. And they have no access to the company’s famous ‘partnership’ model nor the annual bonus. UVW claims that:

Every year in store the annual bonus is publicly announced. This means the cleaners are forced to watch everyone celebrate and then sweep up the confetti and mop up the spilt champagne as a cruel reminder of their second class status within John Lewis.

The retailer’s profits for the six months to July 2016 were £81.9m, a fall of over 14%. But John Lewis has still managed to increase the pay of its workers by around £33m. At the same time, the cleaners only saw a pay increase of 6p per hour. UVW has been campaigning for the cleaners to receive “parity of pay and terms and conditions of employment with in-house staff”.

There appears to be a running theme in the UK with the treatment of foreign-born, outsourced cleaning staff. And it’s one of exploitation, disregard and disrespect. While regular staff at places like John Lewis and LSE get treated as some may expect, the cleaners are indeed considered ‘second-class citizens’. For two organisations that would like to be deemed ethical, it’s a shocking breach of their credibility and duties.

The Canary contacted Noonan for a statement, but had received no reply at the time of publishing.

– Support the UVW Union and read more on the cleaner’s dispute.

– Contact the LSE, telling them to review the cleaning contract.