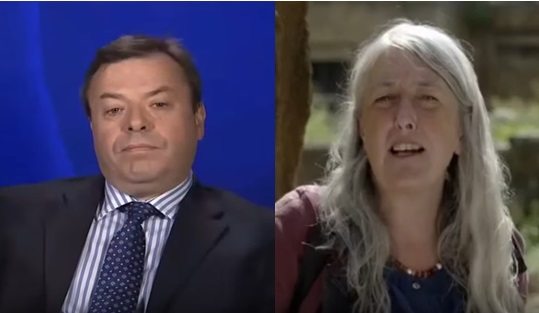 Millionaire UKIP donor Arron Banks has been left red-faced after attempting to explain the fall of the Roman Empire to Mary Beard, one of Britain’s leading historians.

Arron Banks is an insurance magnate who became UKIP’s biggest donor, wielding significant influence on the party. He is not known for his positive attitudes to women. After he received a ‘prevention of harassment’ for his treatment of 33-year-old female colleague Jo Featherby, she was dismissed from his firm. Banks later settled out of court.

Mary Beard is a leading Professor of Classics at Cambridge University, a fellow of Newnham College, the Royal Academy of Arts Professor of ancient literature, and well known to the nation for her TV appearances – particularly the archaeological work at Pompeii. There are few people in the world who are better studied in the rise and fall of the Roman Empire than Mary Beard.

Banks on the fall of Rome

On 4 December, Arron Banks attempted to pin the blame for the collapse of Rome on, you guessed it, immigration. But Beard stepped in to correct him.

i think you all need to do a bit more reading in Roman history before telling uswhat caused the fall of Rome. Facts guys!

Undaunted by the intervention, Banks proceeded to try and school Beard in a revised version of Roman history – written by him.

History is a matter of opinion and every player writes his own version. That's different obviously https://t.co/0Td0nkaLPa

Beard’s firm but fair response garnered her a lot of praise.

@Mr__XYZ @atomiumlondon not really so simple. Idea of border completely different for a start

@Mr__XYZ @Senor_gulicreza @Fraser91A sorry mr banks but this might be a subject on which to listen to experts!

sorry but you may have strong views but you guys don't know Roman history.

The conversation was quickly picked up by others on the Twittersphere, who weren’t slow in chiming in.

Next week he'll teach Tim Berners-Lee about the internet and define rock and roll to Paul McCartney https://t.co/BwLfkYGEgo

Only one person can come out of an argument about Roman history with Mary Beard well and that person is Mary Beard @wmarybeard https://t.co/XMrGvO4dWF

Banks may well have a lot to offer the world on a whole range of subjects. But when it comes to the history of the Roman Empire, we’ll put our money on Professor Beard.