A man has been arrested over threats against Gina Miller, but she keeps fighting the government in court - Canary 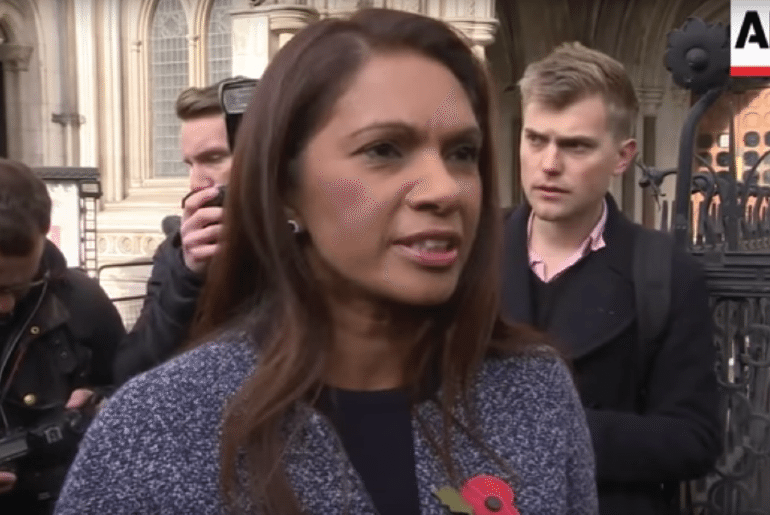 A man has been arrested by police on suspicion of making ethnically-aggravated threats against Gina Miller. Miller, an investment manager, is the lead claimant in the ongoing court case that has sought to give parliament a vote on the triggering of Article 50.

The man arrested is believed to be 55 years old, and was arrested in Swindon, England. The Metropolitan Police’s anti-cybercrime unit Falcon, which was responsible for the arrest, has also issued a ‘cease and desist’ notice to a 38-year-old man from Fife, Scotland.

Meanwhile, Miller’s Article 50 case is being heard in the Supreme Court, which is the highest legal authority in the UK. Miller has said that the battle isn’t about reversing the EU Referendum, but about maintaining the sovereignty of parliament:

This case is far more fundamental than that. It is about any government, any prime minister, in the future being able to take away people’s rights without consulting Parliament.

We cannot have a democracy like that. That isn’t a democracy, that is verging on dictatorship.

Miller has been receiving threats and abuse since her High Court victory in November. Partially, she has blamed the response from certain mainstream media outlets. Speaking to Vogue, she said:

I’m realistic about what happens when you put your head above the parapet – I know what that means – but the reaction to this case has been very alarming and I think certain media outlets and politicians should be hanging their heads in shame that they are inciting violence, racial and sexual hatred, even death threats against me. It is a total disgrace. We already have a very precarious, fractured society and they’re just adding to it. Very few have taken the time to read my case and, if anything, politicians should be thanking or reimbursing me because the fact is I’ve done their jobs for them, at my cost.

Somebody has put a bounty on my head on social media, offering £5,000 to anybody who runs me over.

It’s easy to dismiss what people say on Twitter as idle threats. But earlier this week, a man walked into a US pizza restaurant with an assault rifle. His reason for doing so was a fake news story that claimed Hillary Clinton was running a paedophile network from Comet Ping Pong pizza. At the time of the incident, the story had already been widely debunked.

The Daily Mail has reported that Miller appeared at the court flanked by bodyguards. In the same article, it reported:

She has blamed ‘irresponsible’ Leave supporters for whipping up anger

What it fails to mention is that Miller specifically blamed “certain media outlets and politicians”. In other words, she focused on those whipping up the anger rather than those being whipped. And as The Daily Mail is one of the publications that has been accused of “whipping up” anger over the court case, it is perhaps unsurprising that it avoids any mention the media’s role.

Miller’s case is being heard in the Supreme Court between the 5 and 8 December. The verdict is expected in the new year.

– Find out more about the High Court ruling.