Now Journalist of the Year 2016 has been crowned, everyone's convinced they're taking the piss [TWEETS] - Canary 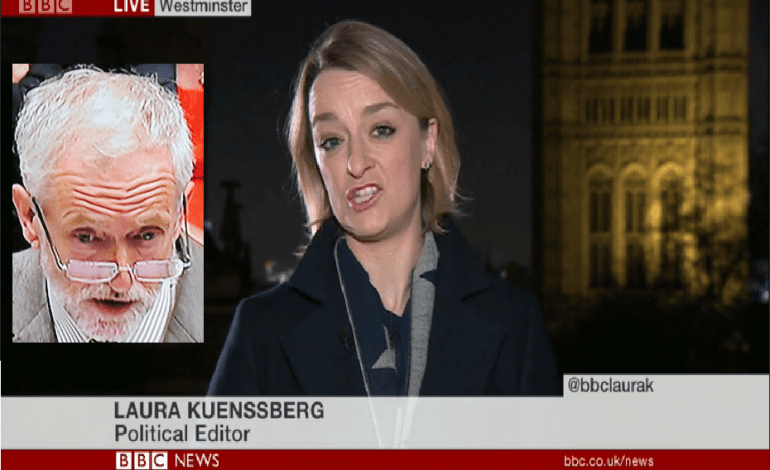 Press Gazette has awarded Journalist of the Year to none other than BBC Political Editor Laura Kuenssberg. Her reporting has been beset with allegations of severe bias from BBC viewers, concerned with her balance.

So, on social media, people were dumbfounded:

Is this a joke? It's in poor taste. Her blatant lack of balance a key factor in the general poor regard for BBC news now.

@DPJHodges This has to be one of those fake news items. If she is due an award it should be for Tory PR person of the year.

The judges didn’t say much of their reasons for selecting her:

In a tumultuous year she rose to the challenge and made the story of Brexit her own.

To commemorate Kuenssberg’s victory, let’s look back at some of the highlights of her year.

The BBC is supposed to report the news, not create political dramas that damage the leader of the opposition. Surely, as a public service, it should value balanced coverage over drama and spectacle. But Kuenssberg personally convinced former Shadow Cabinet member Stephen Doughty to resign live-on-air, right before Prime Minister’s Questions (PMQs).

This was revealed by Andrew Alexander, an output editor for the Daily and Sunday Politics series, in a post on the BBC Academy website. The post was deleted shortly after.

Alexander also admitted that Kuenssberg, Andrew Neil, and other BBC journalists knew full well the damage it would do to Corbyn:

we knew his resignation just before PMQs would be a dramatic moment with big political impact.

Editor of BBC live political programmes Robbie Gibb rejected the suggestion that the BBC “orchestrated and stage-managed the resignation of Stephen Doughty”, saying he did “not accept, in any way, the programme has breached its duty of impartiality and independence”.

Kuenssburg also came under heavy fire from widespread sources for her coverage of the May 2016 local elections.

3) A puff piece for Theresa May, a tirade for Jeremy Corbyn

The third leg of our journey into Kuenssburg’s award-winning year has two parts.

Take a look at how she covered the unelected Conservative Prime Minister, for example. She praised Theresa May’s “cool, calm composure”, speculated that “the public is relieved to have an experienced minister in charge”, and called May a “traditional safe pair of hands”.

The Political Editor also presented a Conservative Party united under May in the piece:

with the lion’s share of Tory MPs supportive of her

In reality, the Conservatives are deeply divided over Brexit, and May’s wafer thin parliamentary majority gives decisive power to backbenchers. For example, Tory backbenchers are pushing a rebellious campaign within the party to deliver a hard Brexit.

While praising May, whitewashing her dangerous record, and suggesting a unified Conservative Party, Kuenssberg’s coverage of Corbyn was strikingly different. She ridiculed the Labour leader for his cabinet reshuffle in January:

this whole process has not just been chaotic, but also slow…

It began what felt like 48 very long hours ago…

the last 24 hours have been a damaging pantomime…

Blogger Tom Pride looked at her priorities at the time:

When questioned on alleged bias, the BBC claims it is “impartial”, saying:

The BBC is impartial and our journalists put their personal views to one side when they join the corporation. Our editorial guidelines on impartiality and conflicts of interest can be found here: http://www.bbc.co.uk/editorialguidelines/guidelines/impartiality

But a pile of academic evidence says otherwise.

Still, Kuenssberg has been awarded ‘Journalist of the Year’.

Considering Kuenssberg’s support of the party of privilege is patently clear, many viewers will feel this speaks volumes about the poor standard of mainstream journalism in 2016.