The next battleground for the Labour coup has been announced, and it’s set to drag on for months - Canary 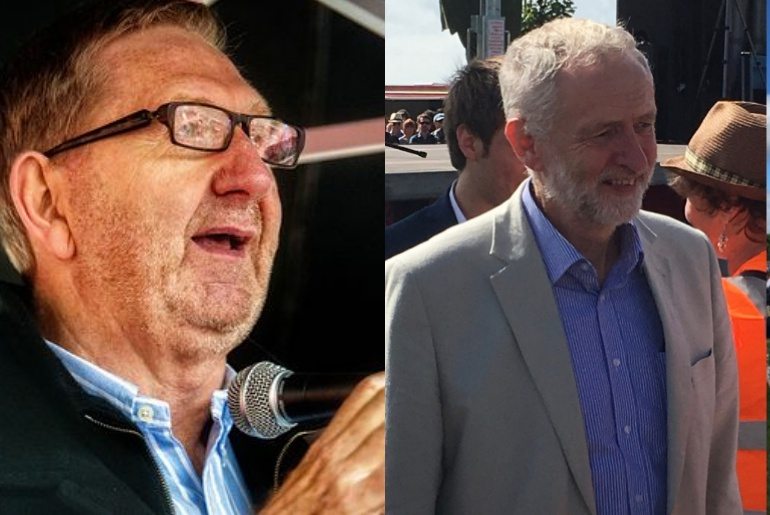 The next battleground of the Labour coup has been revealed with a challenge to Len McCluskey’s leadership of Unite. Gerard Coyne is standing to be the next General Secretary of the union. And he has claimed that McCluskey, a close ally of Jeremy Corbyn’s, is “playing Westminster power games” instead of standing up for workers’ rights.

Unite is affiliated to the Labour Party. During the last leadership election, 60% of its members voted for Corbyn to continue as Labour leader. And McCluskey is one of Corbyn’s close allies. Speaking after the Unite vote, McCluskey said:

The Corbyn team deserves particular credit for inspiring young and old alike, for pointing the way towards how Labour can transform itself to once again be the people’s party.

But it is McCluskey who has forced this leadership vote. His tenure as General Secretary was due to end in 2018. And he has told members he is forcing an early election with the aim of leading the union until 2020.

Tom Watson is one of McCluskey’s most vocal critics. Watson has slammed McCluskey in the past for his support for Corbyn, given Corbyn’s anti-Trident stance, stating:

If I was a defence worker in Unite and I was reading social media that Unite were about to give Jeremy Corbyn a quarter of a million pounds of my subscriptions, I would be furious.

But McCluskey hit back, saying:

No union will fight harder for its members than Unite, something our defence workers are the first to recognise. Yet Tom is using this issue to try and stir up an opposition in our forthcoming Executive Council elections and to myself as General Secretary.

Writing in The Guardian, Coyne has set out why he is standing for General Secretary:

We are living in an age of chronic insecurity. But just as the economy and the needs of our members are changing rapidly, unions must change too. We need to be more flexible, more responsive and more transparent in the work we do.

Coyne, who has worked for Unite for 28 years, further stated:

I passionately believe Unite members would be better off under a Labour government and I will continue to work with anyone to bring that about. But I also understand that most of those members want their union officials to concentrate on negotiating pay deals rather than playing at politics. I want to run Unite and serve all our members. Not play power politics.

There is nothing in Coyne’s statement that is fundamentally wrong. Unions should be transparent. And their main focus should be workers’ rights. But under McCluskey’s leadership, Unite has won significant victories for workers.

For example, Unite was involved in supporting blacklisted workers in their fight for compensation against major construction firms. And in August, it won a £364,000 payout from haulier Eddie Stobart Ltd over holiday pay. It is also supporting Argos delivery drivers who announced that they are going on a 72-hour strike over Christmas regarding their holiday pay.

Meanwhile, Unite’s Hotel Workers Branch is fighting to improve rights and unionise the hospitality sector. And Unite has championed its community membership scheme to support those on benefits and in precarious employment.

Coyne appears to be staking his leadership bid on changing the “union’s priorities”. He said:

The reality here is there’s been much criticism about the fact that the general secretary and the union more generally has just been dabbling in politics all the time. I’m not going to fall into the trap of trying to determine who the leader of the Labour Party is.

It’s not a political organisation, it’s a trade union.

And this seems to be where his leadership bid gets odd. A union which is affiliated to a political party is political. And it is precisely the conditions created by the ideology championed by the Conservative government – a government that is whittling down the rights of unions – which make unions essential.

All these elements make Unite political, by definition. And it is impossible to separate them out. Combined with criticising McCluskey’s support of Corbyn, this could clearly be the next battleground in the Labour coup. And with a decision not due until spring, the stage is now set for another few months of Labour Party infighting.

Featured image via Wikimedia and author’s own